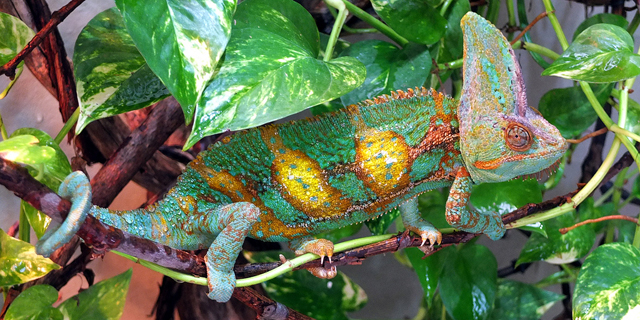 Chameleons change their coloring to avoid predation and to communicate with one another. Researchers have now shown that complex color changes in the veiled chameleon (Chamaeleo calyptratus) are predictive of different behaviors. Their work was published in Biology Letters last month (December 23).

Russell Lignon and Kevin McGraw of Arizona State University pitted 10 adult veiled chameleons against each other in a round-robin tournament in which each reptile faced every other reptile, one-on-one. They recorded the interactions in high definition and, after adjusting the colors digitally to reflect what other chameleons would see, analyzed the speed and brightness of color changes at 28 different spots on each chameleon. “The changes essentially turn the chameleon’s entire body into a billboard advertisement,” Ligon told National Geographic’s Not Exactly Rocket Science. Chameleons with brighter stripes were more likely to start a fight, while those... 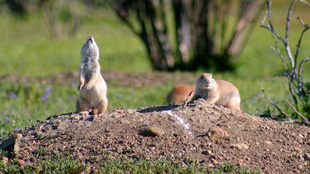 FLICKR, USFWS MOUNTAIN PRAIRIEBlack-tailed prairie dogs (Cynomys ludovicianus) perform a behavior called a jump-yip—they balance on their hindquarters and throw their heads back while emitting a loud squeak. The jump-yip is probably a tool to communicate with prairie dog neighbors and determine their alertness and number, according to a study published last week (January 8) in Proceedings of the Royal Society B.

James Hare of the University of Manitoba in Canada and his colleagues studied 16 prairie dog towns over a two-year period. The team found that prairie dogs that gave the initial jump-yip were more likely to continue emitting the signal if their neighbors did not respond. When the other rodents responded in larger numbers and for a longer time, the initial jump-yipper spent more time foraging and was less vigilant. If its neighbors were slow to respond, though, the instigating prairie dog did less foraging. “I started to think of it as a potential test of the emergency broadcast system,” Hare told LiveScience.

“There have been a variety of hypotheses for why prairie dogs perform jump-yips, with no firm answers,” Con Slobodchikoff, who did not participate in the research, told National Geographic’s Not Exactly Rocket Science. “This study provides solid data that helps to explain why these animals use this form of communication.” 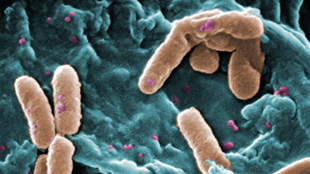 CDC, JANICE HANEY CARRBacterial cells with identical DNA can behave differently. Now, researchers have shown that the asymmetric distribution of a second messenger—cyclic di-GMP—in Pseudomonas aeruginosa daughter cells shortly after cell division can cause changes in motility behavior in the bacteria. The work was published last month (December 17) in eLife.

After P. aeruginosa divides, one daughter inherits the flagellum, and the other quickly grows a new one. With the flagellum comes an enzyme called PA5017 that reduces cyclic di-GMP levels. The researchers found that bacteria lacking PA5017 moved more slowly and changed directions less often than bacteria with intact PA5017. The findings suggested that elevated levels of cyclic di-GMP led to less-motile cells.

“What we have shown is that the uneven inheritance of organelles is another way cells have to create diversity and increase the chances of the survival of its species,” coauthor Samuel Miller of the University of Washington said in a statement. “Here we’ve shown it in a bacterium, but it probably is true for all cells, including human cells.” 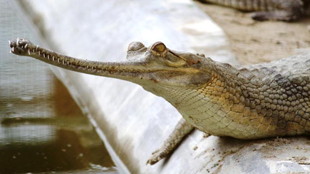 GharialWIKIMEDIA, SNEHIL3Though adult crocodilians use antagonistic behavior to compete for resources, little is known about this behavior in juveniles. Researchers led by Matthew Brien of Charles Darwin University in Australia observed seven species of crocodilians and found antagonistic behavior present in both hatchlings and juveniles. Their work was published in PLOS One last month (December 11).

“This behavior where they twitch their tail before launching themselves into the other one, then swing their head quite violently into the head or the body of an opponent—really, we’ve only ever seen that in adults during the breeding season,” Brien told Reuters. 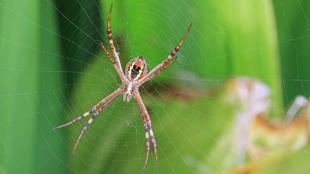 WIKIMEDIA, STU PHILLIPSMale spiders that must visit females’ webs during courtship face the threat of being eaten by the female before she is convinced he is a mate and not a meal. Orb-web spider (Argiope keyserlingi) males vibrate female webs by performing courtship shudders the moment they come in contact with the web, delaying predatory female behavior, according to a study published last month (December 19) in Scientific Reports.

“It’s been a puzzle, how male spiders manage to court the female without getting eaten straight away, because female web building spiders are very aggressive,” coauthor Anne Wignall of Macquarie University in Sydney, Australia, told the Australian Broadcasting Corporation.

Wignall and coauthor Marie Herberstein recorded a male spider shaking a web and later replicated that behavior using an electromagnetic shaker. They presented female A. keyserlingi spiders with crickets, while also either shaking their webs, playing white noise, or doing nothing. The females responded much more slowly to prey in the presence of the simulated male shudder. Female spiders of another species (A. aetherea) also responded more slowly when their webs were shaken in imitation of the A. keyserlingi shudder vibration.

Next “we want to test if the Argiope shudder will work when we play it back to a female spider of a different family,” Wignall told io9.