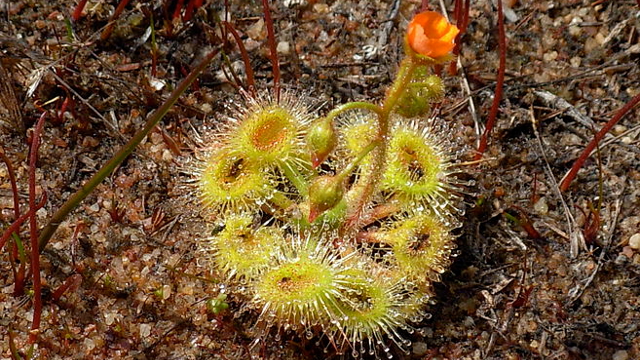 Many carnivorous plants use sticky surfaces to secure their meals, trapping insects on flypaper-like leaves. But the common sundew (Drosera glanduligera) from southern Australia boasts a more complex strategy, involving a fringe of tiny, touch-sensitive tentacles that snap into action when triggered by an unsuspecting insect. At just the right moment, the tentacles flick the prey into the plant’s glue-covered leaf trap, where it is digested to fuel the plant’s growth—an action that happens 4 times faster than the blink an eye, according to a study published last month (September 26) in PLOS ONE.

Using high-speed video, scientists at the University of Freiburg, Germany, filmed the reactions of lab-raised sundews to live insects. To get a closer look, they also triggered the tentacles with nylon thread while recording under a microscope.  Once activated, the tentacles bend at a hinge near... 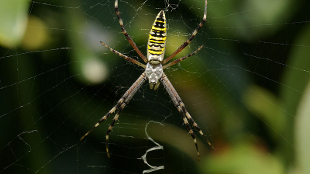 Wikimedia Commons, LaitcheOver the years, scientists have come up with several explanations for the intricate, highly reflective patterns woven into the webs of orb-weaver spiders. They could be created to scare birds, attract mates, offer camouflage, or provide shade from the sun.

But scientists from the University of Incheon, South Korea, have a different idea. Reporting in an article published online September 14 in Behavioural Ecology and Sociobiology, they presented evidence that wasp spiders (Argiope bruennichi), an orb-weaving species named for the females’ striped abdomens, produce zigzag decorations to attract a certain type of prey—insect pollinators sensitive to UV light.

Comparing the types of insects caught in webs with and without the special decorations, known as “stabilimentum,” the researchers found that decorated webs caught twice as many large prey insects than those that were unadorned. And the type of prey caught—flies, wasps, beetles, and butterflies previously shown to be highly attracted to UV light—suggest that the spiders are using highly reflective patterns to take advantage of this attraction.

However, the researchers also said their findings do not rule out the possibility that stabilimentum have other purposes, such as mechanically strengthening the web.

Courtesy of Daphne Soares, University of MarylandA species of blind cavefish found only in the dark, fast-flowing waters of a single cave in Ecuador navigates with teeth protruding from its skin, according to a report published August 21 in Current Biology.

Skin teeth, known as denticles, are not unusual among fish. They consist of a vascularised pulp cavity surrounded by dentine and enamel, and are used for protection, cutting, or to reduce drag as the fish swim. But this particular catfish (Astrobelus pholeter) seems to have evolved a new use for its skin teeth—feeling its way around in the darkness and strong currents.

Most fish sense water flow with neuromasts, small organs in their lateral lines, and many cavefish species have enlarged versions of neuromasts adapted for life in the dark. But A. pholester has none. Instead, the researchers found, its skin teeth sense the direction of water flow and distance from the bottom, and send that information to the mechanosensory part of the brain. When the team removed the denticles, the fish could no longer orient themselves.

“We expect that the mechanosensory nature of denticles highlighted in this extreme species will uncover a widespread sensory role for these structures in other animals,” Daphne Soares, a biologist at the University of Maryland and lead author of the study, said in a press release. 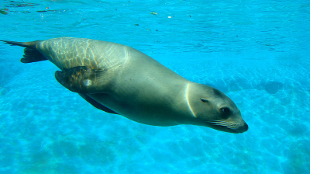 Wikimedia Commons, VassilCalifornia sea lions (Zalophus californianus) are brilliant divers. They plunge to depths of 300 meters and return to the surface swiftly without suffering decompression sickness, which can kill human divers if they ascend too quickly. Now, by tracking a female sea lion fitted with a radio-transmitting data logger, zoologists at the Scripps Institute of Oceanography in La Jolla, California, have revealed the key to the marine mammals’ deep-diving secrets—collapsing their lungs.

The logger kept track of the oxygen pressure in the sea lion’s arterial bloodstream—a proxy to detect lung collapse—as she made 48 dives, each lasting around 6 minutes. As reported last month (September 19) in Biology Letters, the logger revealed that her lungs collapsed at around 225 meters and then re-expanded again at the same level on her ascent.

Her ability to execute this trick appears to result from a depletion of air-processing alveoli—stretchy, balloon-like structures of the respiratory tract that usually ferry air to the lungs. This not only keeps nitrogen out of the bloodstream, ensuring that bubbles won’t form on the ascent, it also reduces the amount of oxygen delivered to the bloodstream, preserving it instead in the upper airways. Then, when the pressure decreases as the sea lion swims up, the oxygen in the upper airways expands into the lungs to ensure she won’t black out in the shallows.

A diet of corpses and crap 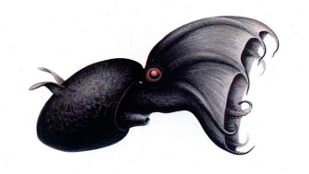 Wikimedia Commons, VictordkDespite its intriguing name, the vampire squid (Vampyroteuthis infernalis) feeds not on living things but “marine snow”—decaying creatures and feces that fall from above—according to a report last month (26 September) in the Proceedings of the Royal Society B.

An ancient species with features of both octopi and squid, vampire squid lead solitary lives in the dark, oxygen-depleted waters 3,000 meters below the ocean surface. Unlike most cephalopods, it has no feeding tentacles. But among its 8 arms it does have two retractable, thread-like filaments, the exact function of which has long confused scientists. To solve the mystery, marine biologists at Monterey Bay Aquarium Research Institute (MBARI), California, used unmanned submersibles to observe the squid in their natural habitat, as well as bring some back for study in the lab.

Examining the squid’s stomach contents, the researchers found that the animals eat the remains of plankton and the discarded exoskeletons of tunicates and crustaceans, as well as fish scales, diatoms, and fecal pellets. The team also saw how the squid capture such morsels—by deploying their long filaments, up to 8 times their body length, to which the falling matter adheres. “The filament is retrieved between the arms of the vampire squid and the food is cleaned off,” MBARI’s Henk-Jan Hoving, co-author of the study, told Discovery News.

This adaptation, unique among cephalopods, allows these animals to spend their lives at depths where typical cephalopod foods are scarce but predators are few. It could also explain why they lived through mass extinction events that wiped out other species.