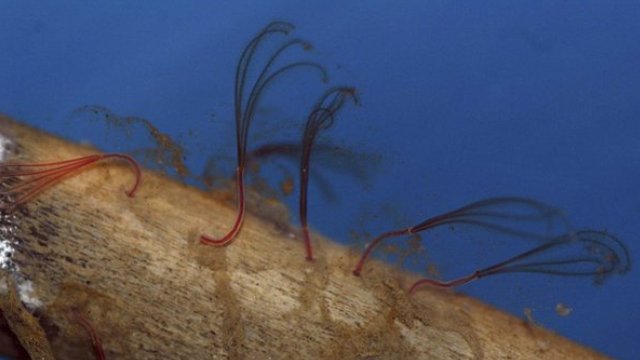 Tiny worms that bore into whale bones use acid to get at the nutrients, according to new research presented at the Society for Experimental Biology annual conference in Salzberg, held last week (June 29 – July 2). The mysterious worms, discovered only 10 years ago, have no mouth, gut, or anus. Researchers discovered that symbiotic bacteria break down the ingested fats and oils, but how the worms could dig into bone was unclear. The new study identifies acid-secreting enzymes in the root-like regions of the worms that attach to the bone. The skin cells on the “roots” are long and protruding, with enlarged surface areas that help maximize the amount of acid secreted.

The group of worms, termed Osedax (Latin for “bone devourer”), was discovered by chance when researchers hunting for deep-sea clams came upon a rotting...

Must diet and exercise

Dietary restriction may not be enough to prolong life, according to a new study published July 3 in Cell Metabolism that shows flies have to be active to reap the benefits of dieting. Dietary restriction is thought to elongate life through enhanced fat metabolism, especially in muscle tissues, which has previously been linked to increased spontaneous activity. The increased movement is thought to be an evolutionary adaption to encourage foraging, and has been observed in primates. However, it was not known whether the muscle movements were necessary to promote the life-extending benefits of eating less. In this study, fruit flies on the same calorie-restricted diet, but that were not able to move, didn’t live as long as their active counterparts.

According to the researchers, if the same holds true for humans, cutting back on food alone may not be the best strategy. It’s also important to remain active, and to do so, enough still needs to be eaten to avoid fatigue. The research also highlighted peptides that increase fat metabolism and spontaneous activity independent of dietary restriction, pointing to the potential for drugs that do the same.

Cuttlefish use a camouflage technique to deter potential competitors, splitting their skin pattern between a male side and a female side. The behavior, observed for the first time and reported last week (July 3) in Biology Letters, allows a male cuttlefish to court a female with his male-patterned side while throwing off other potential mates by showing them his female-patterned side. Cuttlefish change their patterns by shifting pigment-containing cells closer or further away from the surface of their skin. They were known to be able to show two patterns at once on different sides of their body, but when one researcher noticed in the lab’s aquarium that male fish were displaying a female pattern, he and colleagues combed through images of cuttlefish in the wild to look for patterns of behavior. In a group with one female and two males, the male closest to the female displayed the dual-gender pattern 39 percent of the time. Cuttlefish have one of the largest brain-to-body size ratios of any invertebrate, and the study’s authors believe the behavior is a mark of their complex social intelligence.

Sluggish sharks sneak up on seals

The Greenland shark, the ocean’s slowest fish for its size, spends a lot of its time snoozing in deep, cold waters. While the remains of seals had been found in their stomachs, it was believed they simply ate the carcasses that floated down to the sea bed, but a new study published online last month (June 8) in the Journal of Experimental Marine Biology and Ecology found they actually do hunt live prey. While even at burst speed, the sharks only travel at 0.7 meters per second (1.6 mph), around 0.3 m/s slower than a swimming seal, they can sneak up on seals taking a nap. Seals often sleep in the water to avoid being caught by polar bears, but this leaves them vulnerable to the Greenland shark.

The Greenland shark was investigated as part of a project to find out what was eating all the seals off the coast of Svalbard, an island group in the Arctic. The sharks were an unlikely culprit, but shark expert Vincent Gallucci from the University of Washington explained to BBC News that a Greenland shark may not need "to get 100 percent of its mouth onto its prey" in order to eat it. They also use a sucking motion when eating, which may make it “a bit easier for a lie-in-wait ambush predator to consume prey that pass near its mouth," said Gallucci.

The odd mating song of the male club-winged manakin is created by solid bones, an oddity in the bird kingdom. Most birds have slim, hollow humerus and ulna bones that help them to fly, but in the manakin, these bones are solid, and the ulna is covered in lumps and bumps, revealed a study published last month (June 13) in Biology Letters. Raising its wings over its back, the manakin can make a high-pitched peep, which the researchers think is made by special resonating feathers that are anchored in the ulna’s bumps. The solid bone then amplifies the sound by bouncing it throughout the feather.

Despite the extra weight, Makain birds are still able to fly, and the authors of the study conclude the benefit to sound production must be great. High-speed cameras reveal that to make its unusual song, the manakin bird rubs its wings together with intense vibration, around twice the speed of hummingbird wings.

Bears have been participants in the circus, but new research shows they can do more than just perform tricks—they are intelligent enough to count. Three American black bears were trained to pick between groups of dots that either had fewer or more dots than other groups. The dots in the groups were sometimes close together, sometimes further apart, and sometimes moving, but all three bears picked the right group significantly more than would be predicted by chance.The authors suggest this means the bears are not just estimating the magnitude of what they were being shown, which many animals can do, but actually doing something analogous to counting. The research, published June 3 in Animal Behavior, puts the bears’ performance on the same level as monkeys. Lead author Jennifer Vonk of Oakland University told the BBC that "people don't generally understand them to be as intelligent as they probably are." Despite having the largest relative brain size of any carnivore, the way they think is not well understood.