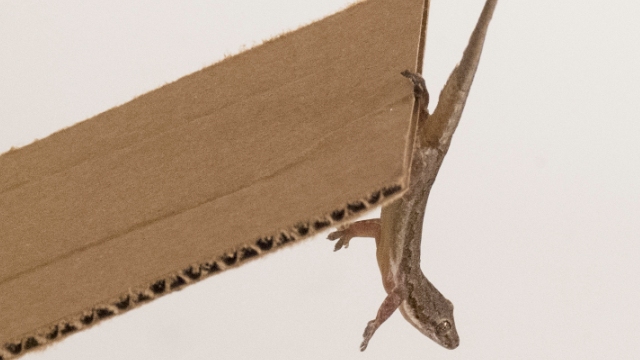 Cockroaches and geckos can’t always outrun an angry homeowner, but researchers have discovered they do have a few ninja-like tricks to disappear in the heat of danger. Racing towards the end of a ledge, cockroaches and geckos don’t slow down, but anchor themselves to the edge and swing underneath at high speed, according to a study published on June 6 in PLoS ONE. Cockroaches use claws on their back legs to facilitate the pendulum swing; flat-tailed house geckos make added use of the sticky hairs on their feet that allow them to climb up walls and windows.

The team at the University of California, Berkeley, discovered the trick using high-speed cameras to slow down the speedy critters, who are thought to be more maneuverable due to their small scale. Their motion was...

We’re all endurance athletes at heart, according to a study published April 15 in the Journal of Experimental Biology, which identified a chemical underpinning of “runner’s high.” Researchers at the University of Arizona and Eckerd College put naturally athletic humans and dogs on treadmills, as well as the more sedentary ferret, to test the effects of runner’s high between mammal species.

Blood samples taken before and after the humans and dogs had happily run on the treadmill revealed elevated levels of the endocannabinoid anandamide, which corresponded with positive emotional feelings reported by the human subject. The ferrets, on the other hand, showed no evidence of such a chemical high.

Endocannabinoids, so-named for the related active ingredient in cannabis, are neurotransmitters that signal the brain’s “reward centers.” The spike after running suggests natural selection worked to encourage high-intensity activities in certain mammals.

“The result of this anandamide-inspired motivation to run was the evolution of an ‘endurance athlete phenotype’,” co-author Greg Gerdeman said in a press release, which “played a major role in the survival and reproductive success of our Homo sapiens ancestors.” Vampire jumping spiders distinguish the tastiest prey based on their antennae, according to a new study to be published on July 1 in the Journal of Experimental Biology. One species of jumping spider native to East Africa feeds indirectly on vertebrate blood—by catching mosquitoes that have just fed. Since male mosquitoes don’t consume blood, the spider gets a more nutritious meal from females.

To test which body parts enticed the spiders, researchers from the University of Canterbury in New Zealand created Frankenstein mosquitoes made of different body parts of dead males and females. While a blood-engorged abdomen was the biggest clue, when two blood-laden Frankenstein -bugs had different antennae, the spiders preferentially pounced on the one with the female head.

Plants can be picky about who gets to eat them. In the latest example from the Israeli desert, the sweet mignonette plant forces the spiny mouse to spit out its seeds while munching on the fruit by setting off a “mustard oil bomb,” according to new research published in Current Biology last week (June 14).

When a seed is chewed, enzymes are released that activate toxic substances in the fruit pulp, causing a hot mustard taste that the mice and other rodents spit out, along with the seed. When the American and Israeli research team deactivated the mustard bombs, the mice consumed 50 percent more seeds than when the bombs were active, suggesting the plant makes the mice very efficient seed-spreaders.

“It’s fascinating that these little mice are doing analytical chemistry,” biologist and co-author Denise Dearing said in a press release. “Assaying the fruit for toxic compounds and learning not to bite into the seed.”

Researchers looking for a radio-tagged female gray mouse lemur in Madagascar got a nasty surprise when they found her: a male of the same species was literally making a meal of her. This is the first documented case of cannibalism in non-human primates where the victim is an adult, according to the report published online May 23 in the American Journal of Primatology.

The cause of death of the female gray mouse lemur was unknown because the male had already chomped down her vital organs, but she was known to have been alive and active an hour before being discovered.

Examples of species that practice juvenile cannibalism include chimps, bonobos, and orangutans, and is thought to be motivated by food: get rid of an extra mouth and get some extra nutrition at the same time. But other than humans, no primate has ever previously been found to eat another adult. While one case isn’t necessarily indicative of the entire species, the finding raises intriguing questions about what primates are willing to supplement their diets with. Gorillas communicate differently with their young than to other adults, much the same way humans do, according to a study published May 29 in the American Journal of Primatology. Instead of vocal signals, however, the team at the Max Planck Institute for Evolutionary Anthropology watched mother gorillas’ hand gestures and facial expressions for signs of baby talk. They found that the mothers used similar signals to those used in adult groups, such as a hand on the head to mean “stop it,” but used them far more frequently with youngsters.

Tactile gestures in general were more prevalent when Mom was talking to baby, and the researchers believe this is partly to help the youngsters learn to use the language of the group. The finding also hints that parent gorillas know that they have to communicate more carefully with infants who have fewer skills.