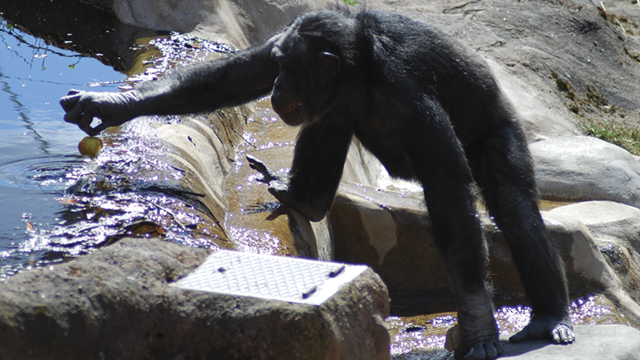 Chimpanzee Santino nonchalantly picks up an apple from a water moat, 15 seconds before throwing the two stones in his left hand at zoo visitors. PLOS ONE, TOMAS PERSSON

In 2009, a chimpanzee named Santino at Furuvik Zoo in Gävle, Sweden, made global headlines for his surprisingly premeditated attacks on zoo visitors: Santino calmly created small piles of stones in the morning before the zoo opened, then later used those stockpiles to pelt zoo visitors who appeared to agitate him—strong evidence that nonhuman animals could plan ahead. But skeptics argued that Santino wasn’t necessarily planning ahead, and was instead repeating previously learned responses to the zoo visitors via a cognitively simpler process called associative learning, ScienceNOW reported.

But now, Santino is back and making his intentions even more clear. In a new PLoS ONE study, published May 9, researchers at the University of Lund...

"No matter what mechanisms lie behind the behavior," senior author Mathias Osvath of Lund University told SciecneNOW, Santino is engaging in planning for the future, and "that is not trivial." Each year, collisions with communication towers in Canada and the United States kill about 6.8 million birds—nearly all of them migratory, according to a study published April 25 in PLoS ONE. That’s equivalent to 27 times the number of birds killed in the 1989 Exxon Valdez oil spill, a major environmental disaster.

Researchers analyzed previous studies of bird victims at 38 towers across the two countries, then extrapolated to all towers measuring 197 feet or higher. The most deadly towers were tall towers, some so high they reach into altitudes at which migratory birds travel, and those with steady-burning red lights, noted Live Science. The lights cause the birds to circle the towers and run into cables, called guy wires, which hold the towers up.

“This is a tragedy that does not have to be,” lead author Travis Longcore at the University of Southern California said in a press release. “With these towers, we are killing birds in an unnatural way. This is senseless.” The authors suggest replacing steady burning red lights with strobe lights, avoiding flood lights and guy wires, and limiting tower heights. When you yawn, it’s likely that nearby friends and family will yawn as well. Humans tend to “catch” the yawns of their friends and acquaintances more than strangers, suggesting that the behavior may be tied to feelings of empathy. But what about your dog? Scientists at the University of Porto in Portugal have found that dogs yawn even when they simply hear the sound of their owners yawning, further evidence of the ability of canines to empathize with humans.

In the study, published in the July issue of Animal Cognition,  canines yawned five times more often when they heard humans they knew yawning as opposed to control sounds, such as a stranger yawning or a computer-produced sound. Contagious yawning has also been observed in baboons, macaques, and chimpanzees.

A small social mammal, the rock hyrax of the Middle East and Africa has surprisingly complex vocalizations, according to an April 18 study in the Proceedings of the Royal Society B. The brown, stocky animals are known to be extremely vocal, with males singing songs that can last several minutes. Now, scientists have discovered that the order of the notes in those songs is significant, suggesting that the songs have syntax, the BBC News reported. In addition, hyraxes from different regions have different dialects, the authors found.

"This is something you find very, very rarely amongst mammals,” lead author Arik Kershenbaum of the University of Haifa in Israel told the BBC. The only other mammals known to have complex vocalizations include primates, cetaceans, and bats. Animals of all sizes can form gangs in the wild, according to two new studies of bottlenose dolphins and small songbirds called great tits. A five-year study of dolphins in western Australia found that the mammals travel in open troops, forming alliances to herd females, mount attacks on other troops, and even form larger “armies” to defend against aggressive groups, BBC Nature reported.

A second study found that great tits, small hole-nesting birds, are more likely to form an anti-predator mob with their neighbors if those neighbors are familiar from the previous year. "There are two explanations," senior author Ada Grabowska-Zhang from the University of Oxford told BBC News. "One: birds join their neighbors because they think: 'My nest could be next.’ Or they join because their neighbors have joined their mobs before, and they know that if they don't reciprocate, they'll be left alone next time. It's sort of great tit tit-for-tat."

What do cheetahs and horses have in common? They’re fast, and they have big eyes. Maximum running speed is the most important variable influencing mammalian eye size other than body size, according to a study of 50 mammals presented at the 2012 American Association of Physical Anthropology meeting held in April in Portland, Oregon.

Species with larger eyes usually have higher visual acuity, said author Chris Kirk of the University of Texas at Austin in a press release. So large eyes give animals like horses and cheetahs “better vision to avoid colliding with obstacles in their environment when they’re moving very quickly,” he said.

It was previously believed that the time of day that an animal is active (nocturnal or diurnal) was a main factor driving the evolution of mammalian eye size, but subsequent research demonstrated that activity pattern only has a modest effect on eye size. By comparison, body mass plus maximum running speed together can explain 89 percent of the variation in eye size among mammals, the researchers found.