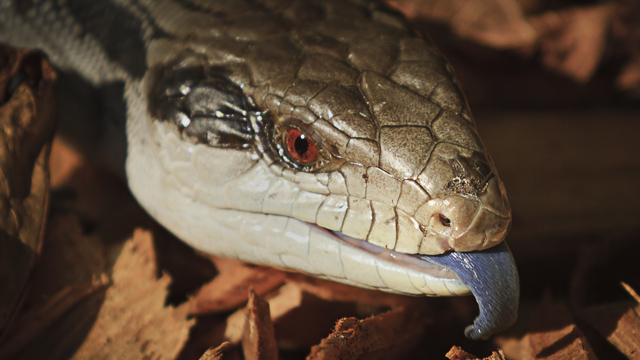 Poisonous invasive species don’t deter the hungry Australian bluetongue lizard. A new paper in the American Naturalist found that the native lizards that eat toxic mother-of-millions plants are largely resistant to the toxins of the invasive cane toad, which has wreaked havoc on Australia’s ecosystems since being purposefully introduced in 1935 in an attempt to control the native cane beetle, which damages sugar cane crops. Both the plant and toads produce a toxin called bufadienolide. When injected with a non-lethal dose of bufadienolide, bluetongues from areas of Australia without the toxic plant swam 50 percent slower than normal, while bluetongues from areas with the plants swam only 20 percent slower, demonstrating a resistance to the poison.

The researchers hope that resistance will lessen the impact of another potential invader with a similar toxin, the black-spined toad, ScienceNOW reported. The toad has already invaded... Philippine tarsiers may be small, but they have a superhero sense of hearing. The little primates, often no bigger than a human hand, communicate using ultrasonic sounds, according to a study published earlier this month in Biology Letters. Only a few other mammals, including cetaceans, domestic cats, and some bats and rodents, send and receive vocal ultrasound signals. The tarsiers’ squeaky calls, well above the vocal range of any known monkey or ape, may keep predators like birds from listening in on their conversations, reported ScienceNOW. The ability to hear the ultrasonic sounds may also help tarsiers zoom in on their prey—small insects that also communicate using ultrasonic frequencies.

Researchers tested the primates for ultrasonic abilities after casual observations that tarsiers occasionally opened their mouths as if to shout, but no sound humans can hear came out. "Philippine tarsiers have often been described as quiet," co-author Marissa Ramsier, an anthropologist at Humboldt State University in California, told ScienceNOW. But "they're screaming and talking away, and we just didn't know it."

Song of the dead

A 165-million-year-old cricket song has been resurrected. Researchers at China’s Capital Normal University compared the well-preserved wing structures of fossil Archaboilus musicus, a Jurassic ancestor of modern crickets, to contemporary cricket wings, Wired reported, and from that reconstructed what the song might sound like. The low-frequency, high-pitched song may have helped the ancient crickets communicate in the leafy, fern-filled Jurassic forest in which they lived, the authors suggested in a recent PNAS paper. Kanzi, a famous bonobo at the Great Ape Trust in Des Moines, Iowa, understands 3,000 spoken words and can communicate 500 words by pointing to symbols. Now he’s added another impressive skill to his resume—cooking a hamburger. It is the first time a non-human primate has demonstrated the ability to cook food, the Daily Mail reported.

According to his keepers, Kanzi has always been fascinated by campfires and was encouraged, though never instructed, to build them. In a video taken by the Great Ape Trust, Kanzi builds a fire, toasts marshmallows, and grills hamburgers. Finally, like a good camper, he pours water over the fire to put out the flames when finished. See a video of Kanzi in action. The Madagascar aye-aye, the largest nocturnal primate, is recognizable for its strange, twig-like middle finger, an extra-long appendage packed with nerve endings and used to tap tree trunks to find beetle larvae. It turns out the aye-aye is able to regulate the temperature of that single digit, according to a paper in the International Journal of Primatology.  Researchers at Dartmouth College in New Hampshire used infrared imaging to examine the finger, and found that it remains cool when not in use but warms by up to 6°C when the animal uses it to forage.

Because of its specialist sense receptors, the finger is costly in terms of energy, co-author Gillian Moritz told BBC Nature. "Like any delicate instrument, it is probably best deactivated when not in use," she said. How the lemur controls the heating of a single digit remains unknown.

Wildlife videos typically show species interacting, but usually one species is attacking another. In a heartwarming twist on this typical scenario, researchers recently recorded two separate instances of bottlenose dolphins “riding” humpback whales in Hawaii: the whales lifted the dolphins up and out of the water, and the dolphins slid back down into the surf. Both species seemed to cooperate, with no aggression, in the rarely observed social activity. The interaction was described in Aquatic Mammals and a video of the encounter was recently on display at the American Museum of Natural History.