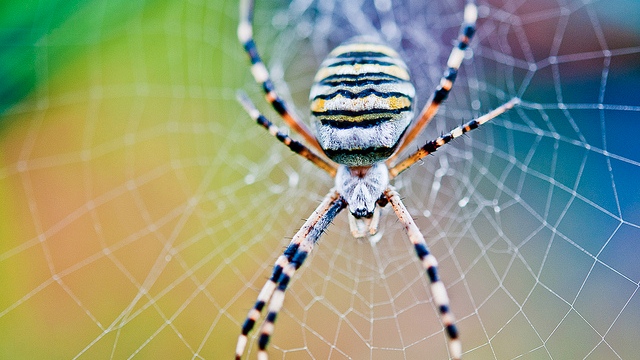 Only around 30 percent of male orb web spiders (Argiope bruennichi) survive their first act of mating because they are devoured by their mates. But new research published in Animal Behaviour suggests that it may be worth it for the boost in offspring health and survival.

In a mating experiment, female orb spiders were allowed to mate with one, two, or three males—to test if multiple mates boost offspring health—and half of each group was allowed to eat their mate during and after sex. Mating frequency had no effect on the health of offspring. However, all females who consumed their lover after copulation had bigger clutches with heavier eggs, both indicators of health and likelihood of survival.

The results may explain why such cannibalistic behavior evolved, and why males sacrifice themselves rather than pursue additional matings. “Sexual cannibalism may...

The mimic octopus bears that name for a reason: the brown-and-white-striped cephalopod is an expert at imitating diverse sea life, including flounder, lionfish, and sea snakes. Reporting in Coral Reefs, researcher Godehard Kopp from the University of Gottingen described the case of a jawfish taking advantage of the octopus’s expertise. Kopp was diving off the coast of Indonesia filming the octopus when he noticed something strange: a tiny striped fish camouflaged among the arms of the master camouflager itself! However, because of the geographical differences of the two species, the authors wrote, “we think this is a case of opportunistic rather than obligate mimicry.” Nest temperature is known to alter many features of reptiles, affecting nutrient absorption in the egg and the speed and size of the resulting offspring. Now, research published in Biology Letters adds learning to the list.

Researchers from the University of Sydney raised two nests of skinks—one warmer, one cooler—then tested the lizards on their ability to hide from predators. The setup was simple: in the back of their tank, they placed a hiding spot with two entrances, one of which was blocked by clear plastic. After some learning drills, the researchers startled the skinks with a touch of the tail, and counted how many times the lizard went for the correct entrance and how long it took.

The skinks that developed in the warmer nest reigned supreme at the learning test. Potentially, this means that, with a warming climate, these skinks will become harder for predators to catch. However, lead author Joshua Amiel warned in Cosmos Magazine that this may not apply to all lizards and that, for some species in cooler habitats, cold nests may be better. Jumping spiders have the rare ability to pinpoint and land upon prey from a far distance—but how? One answer lies in their vision, according to new research published in Science. Two of the jumping spider’s eight eyes are dominant and larger, and both of these have four retinal cell layers, each of which focus on different wavelengths of light. Two of these layers are sensitive to green light: in one, green light is always in focus and, in the other, green light is never in focus.

In an elegant experiment, Japanese researchers presented Adanson's jumping spiders with fruit fly prey under either green or red light. Under the green light, the flies were successful at catching prey, but under the red light, their depth perception was off. This is because the flies need to compare the in- and out-of-focus images under green light to judge depth. When only red light was available, they couldn’t pinpoint the distance to their prey.

“So the spider seems to capture a sharp image and a blurry image and compare the information to estimate the distance of an object,” author Mitsumasa Koyanagi told the New York Times.

In 2000, scientists discovered a rare plant species (Philcoxia minensis) in Brazil that, strangely enough, had most of its sticky leaves growing underground. Clearly those leaves didn’t have a photosynthetic purpose; why would such foliage exist?

The researchers noticed that small worms were often found stuck to the leaves and, suspecting carnivory, fed these nematodes nitrogen-15-laden food as a biomarker. After placing the traceable worms in the soil near Philocoxia’s sticky leaves, the scientists were able to detect the heavy isotope of nitrogen in the plant’s tissues. Furthermore, Philocoxia showed enzymatic activity similar to other carnivorous plants, suggesting that the worms did not decompose and release the nitrogen-15 passively.

The results, published in The Proceedings of the National Academy of Sciences, suggest that "carnivory may have evolved independently more times in plants than previously thought," lead author Rafael Oliveira from Brazil’s Universidade Estadual de Campinas told LiveScience.