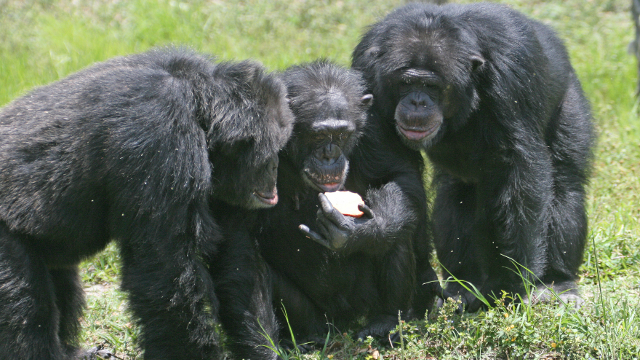 Wild chimps are more likely to call out in response to a poisonous snake when they are near another chimp that has not yet seen the trouble, according to a study published this week in Current Biology. Using plastic models of rhino and gaboon vipers—well-camouflaged snakes with deadly venom—researchers at the University of St. Andrews in Scotland saw that chimps first jumped away from the snakes, then approached it to investigate. At that point, they would make a soft "hoo" sound to alert other chimps, but only if there were other chimps nearby that were unaware of the snake.

“We monitored the snake all day, so we knew which animals had seen it and which hadn't,” lead author Catherine Crockford told BBC News. The results indicate that when the primates called out, “they seem tuned, not into... Often called flying rats and considered dirty city birds, pigeons are generally not known for their advanced cognitive capabilities. But a new study published last month in Science suggests that the birds can in fact learn abstract numerical rules once thought understandable only to primates.

Many non-human primates, for example, can order sets of up to nine objects numerically, demonstrating an understanding of “ordinal numbers.” But such skills have not been seen consistently in non-primate species. In the new study, comparative psychologist Damian Scarf of the University of Otago in New Zealand and his colleagues trained three pigeons to do a variation of the same test—order sets of one, two, and three colored shapes by pecking them in order on a computer screen. If the bird got it right, they were rewarded with food. “They had to learn that it was the number of items that mattered, not the color or shape,” Scarf told ScienceNOW.

After a year, the pigeons learned to order the three sets. But the real test or ordinal understanding came next—ordering two sets of objects that contained anywhere from one to nine items. Impressively, they passed—scoring better than they would have by chance alone, Scarf said.

“The ability to represent and use numerosity is [probably] widespread among many animal species,” comparative psychologist Michael Beran of Georgia State University told ScienceNOW. “Perhaps even advanced mathematical abilities may be found in other animals.”

In other smart bird news, New Caledonian crows are continuing to demonstrate their advanced cognitive skills. In a study published last month in PLoS ONE, the birds quickly learned to drop objects in water-filled tubes to raise the level of floating food. They even learned to reject inefficient and non-functional objects, selectively choosing those objects. “Our results,” the authors wrote, “therefore show that New Caledonian crows can process causal information not only when it is linked to sticks and stick-like tools but also when it concerns the functional properties of novel types of tool.” In a study published last month in Science, ecologist and evolutionary biologist Iain D. Couzin of Princeton University and his colleagues observed an interesting trend in how groups of golden shiners make decisions. The researchers trained one group golden shiners to associate food with a blue target, and another, smaller group to associate food with a yellow target, which the fish prefer naturally. The researchers then put the fish together and watched as they tended towards the yellow targets. This suggested that the smaller group had a more intense preference, which influenced the entire population. “A strongly opinionated minority can dictate group choice,” the authors wrote.

But when the researchers added fish that hadn’t been trained, they found that they started to favor the blue target. Though the result may seem counterintuitive at first, the researchers argue that “the presence of uninformed individuals spontaneously…[returns] control to the numerical majority.”

The experiments may have been done with fish, but it’s tempting to think of the implications for people, particularly with the upcoming elections, The Chronicle of Higher Education reported. The results suggest that “uninformed agents can promote democratic outcomes in collective decision problems,” wrote Carl T. Bergstrom and Jevin D. West of the University of Washington at Seattle in a commentary in the same issue. “Jefferson’s passionate arguments on the importance of education for democratic society notwithstanding,” the commenters wrote, the Couzin team has “identified circumstances in which ignorance can promote democracy.”

Not everyone agrees that the studies have such dramatic implications for human behavior, however. “The claims [the authors] make are not ones made by political scientists,” Lynn Vavreck, an associate professor of political science at the University of California at Los Angeles, told The Chronicle. “In fact, they are opposite.”

The vast majority of fish swim in oceans, lakes, or streams. But there is at least one fish—which lived 230 million years ago and still thrives in the rivers of Senegal and nearby countries—that can walk. According to recently captured video, African lungfish not only walk, but actually bound underwater, striding along riverbeds on skinny fins that stick out from their bodies. To do this, the fish had to raise their bellies off the floor of their tank, a behavior typically only seen in four-legged land animals, ScienceNOW reported. The researchers, which published their results last month in the Proceedings of the National Academy of Sciences, suggest that walking instead of swimming may help protect lungfish from predators or help them catch prey. Regardless of the advantages, the results show that walking evolved before the fish made the leap to land. (See a video of the walking lungfish.) Jackson, an elephant seal that was fitted with a small satellite transmitter on a beach in southern Chile, traveled some 18,000 miles in less than a year—the distance of a roundtrip voyage from New York to Sydney, Australia. Tracked by the Wildlife Conservation Society, Jackson’s journey could provide clues about the health of marine ecosystems, such as the distribution of prey species and how such species have been affected by climate change.

“Jackson’s travels provide a roadmap of how elephant seals use the Patagonian Coast and its associated seas,” Caleb McClennen, WCS Director for Global Marine Programs, said in a press release. “This information is vital to improving ocean management in the region, helping establish protected areas in the right places, and ensuring fisheries are managed sustainably without harming vulnerable marine species like the southern elephant seal.”

After a long year of traveling, Jackson returned to Admiralty Sound where he was first tagged in December 2009, the WCS reported.