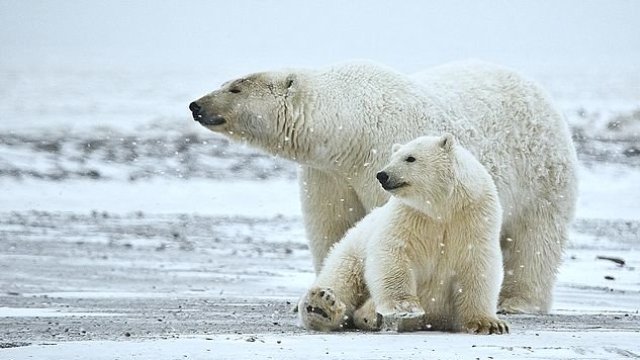 Polar bears usually stick to seals and other blubbery mammals when looking for their next meal. But cannibalism may be increasing among the animals, according to a study published in the December issue of Arctic. The paper arose when BBC photojournalist Jenny Ross captured a polar bear devouring a cub in the Svalbard Archipelago in July 2010. The polar bear attacked the cub with sharp head bites, then guarded its kill when it spotted an oncoming boat, the Huffington Post reported (gruesome photos included).

This isn’t the first time the majestic animals have been spotted consuming their own kind: in 2009, The Canadian Press reported that up to 8 males were cannibalizing cubs. But this was extremely unusual. Traditionally, polar bears have only been observed eating cubs  if the baby bears appeared to be sick. The researchers hypothesize that  starvation may...

Scientists have identified a new crab species with a very handy food source. Yeti crabs, so named because of their furry-looking legs, grow a forest of bacteria on their appendages, allowing them to feast whenever they wish, according to a study published December in PLoS One.

The crab, the second of its family identified, was found by Oregon State University marine ecologist Andrew Thurber while traveling off the coast of Costa Rica in a submersible vehicle over methane seeps, deep sea vents that release hydrogen sulfide and methane. The crab was wiggling its claws over the seep when the pilot picked him up. Waving its legs over the vent stirs up the water and bathes the symbiotic bacteria in fresh oxygen and sulfur, which the bacteria use as energy, Nature reported. When the Yeti crab is hungry, it scrapes off some bacteria using bristles in its mouth. It’s a question as old as time: how does the ostrich get an erection? Now, it looks like scientists have solved the long-standing mystery, identifying a gush of lymphatic fluid, a not-well-developed vascular system for stiffening the penis, that makes the ostrich member grow

University of Massachusetts at Amherst evolutionary biologist Patricia Brennan and her colleagues dissected the genitals of an adult male ostrich, and reported the findings this week in the Journal of Zoology. The lymphatic erection presents an evolutionary puzzle, as it makes little sense for birds such as the ostrich to have evolved a totally separate erection mechanism than mammals and reptiles. About 97 percent of birds reproduce with a “cloacal kiss,” rather than a penis, though ducks, as well as flightless birds like the emu and ostrich also have penises.

In ducks, the lymphatic erection likely evolved as a weapon in the war of the sexes. It allows the penis deposit sperm more deeply by enabling it to snake through the labyrinthine cavities female ducks use as a form of mate choice to weed out sub-par sperm, Nature reported. In ostriches, however, the lympathic penis seems to stiffen the member and move sperm towards the tip. Having a partner may be help moderate stress, at least in Greylag geese. Wondering whether the male-female bond could dampen the stress response in Greylag geese, researchers from the Conrad Lorenz Forschungsstelle in Austria tracked the heart rates of paired and unpaired geese, and found that males with a plus one had lower heart rates during antagonistic encounters than singletons. Female pair-bonded geese had a lower resting heart rate, according to the study published online last month  in Biology Letters. Coupled females also had their heart rates rise as they got farther and farther from their partners, as if the absence alone stressed them out.

The findings suggest that pair bonding may help the geese moderate their stress response, which in turn could reduce their energy expenditure and make them more reproductively successful. While the soothing effect of a partner has been documented in humans, the benefits of a loved one may extend to other social vertebrates as well, the authors suggest. Insomniacs may be sleepy, but they’re sure to be on time. People who have the briefest, most fitful sleep also tend to be the most punctual, according to a study publishing in the forthcoming Journal of Sleep Research.

The researchers tracked how early volunteers for an overnight sleep observation arrived for their appointments, and found that the earliest arrivals slept the least. That’s not a huge surprise, as insomniacs also tend to be perfectionists, and being hyper-timely can be seen as one facet of the urge to get things just right, ScienceNOW reported.