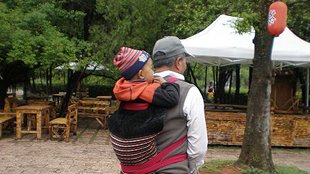 WIKIMEDIA, BrokenSphereSiblings sometimes squabble, but they might also be helping each other become more trustworthy, conscientious, and optimistic individuals, according to a report published today (Jan 10) in Science. The study, which looked at people born in Beijing just prior to or just after the introduction of the One-Child Policy, reveals a number of personality differences in adulthood most likely attributable to the presence or absence of siblings.

“They’ve identified this opportunity to establish a causal relationship between being a single child and how one behaves,” said Abigail Barr, a professor of economics at the University of Nottingham in the United Kingdom, who was not involved in the study. “And they’ve used lab-type experiments to do the measurements. It’s really good science.”

The One-Child Policy, introduced in 1979, is a unique natural experiment, said Lisa Cameron, a professor of econometrics and business statistics at Monash University in...

Most research seems to suggest few if any personality effects of being an only child. “Studies done in other countries have found that only children are very much like other children,” said Susan Newman, a social psychologist and author of The Case for The Only Child. “You have hundreds of studies that actually contradict the findings here.” Indeed, even previous studies of only children in China found them to be largely similar to kids with siblings.

However, said Cameron, “If you just compare only children with others, what you end up identifying is the effect of being an only child plus the effect of family background.” That is, parents who choose to have an only child may differ from those who chose to have many, be it in their parenting style, personality, genetics, or other attributes. “You can’t get a clean measure of what it means to be an only child,” she said.

Because the One-Child Policy removes parents’ choice, it eliminates the family-background variable, Cameron explained, so “we can isolate the effect of being an only child.”

The team also controlled for cultural background and, as closely as possible, for age, recruiting people who were born in Beijing no more than 5 years before or after the policy’s introduction and who grew up in the city.

The team had the participants play simple economics games, which involve the exchange of money between anonymous participants and are designed to test a range of personality indicators. The games revealed that people born after the introduction of the policy were, not only less trusting, less trustworthy, and more pessimistic, but also less competitive, less conscientious, and more risk-averse.

Previous studies of only children have relied on inherently weak measures like questionnaires and observations of children’s behavior to garner data. “When there’s money on the table, you are much more likely to identify [a person’s] preferences and their real behavioral tendencies than if you ask them a hypothetical question,” said Barr. These methodological differences may explain why Cameron and colleagues see an only child effect that previous studies have not, she added.

The findings offer support to those campaigning for the abolition of the One-Child Policy, said Barr, and may have implications for only children outside of China. “It doesn’t give us a definitive answer regarding only children in other contexts, but it does change the default position,” she said. “Instead of saying, well, the best guess is there’s no difference [between singletons and non-singletons], I think it does shift us towards, well, there could be.”

At this stage, perhaps it is best to steer clear of generalizations. Newman is particularly wary. “It just adds to the stereotyping of only children . . . and the stigma that surrounds them,” she said.

Barr disagreed. “If [the new findings] get a debate going about the way children are brought up, I don’t think it will be a bad thing.”