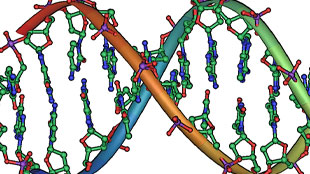 The Human Genome Project (HGP) deciphered the entirety of the human genetic code in just over a decade. Though science and medicine will take some time to sift through all of this information and make hay of it, the project, which cost US taxpayers nearly 4 billion dollars, has already had a tangible impact on the US economy by jumpstarting the booming genomics industry.

Along with all of the supporting suppliers and technology companies, the industry has spawned hundreds of thousands of jobs and helped drive a total economic impact of nearly $800 billion, according to a study released yesterday (May 10) by Battelle, an independent science and technology research and development organization.

"I can't imagine a scientific undertaking sponsored by the federal government that has had this kind of fundamental impact and drive on the US economy," said Simon Tripp of Battelle, the report's...

"I don't think we can quantify it exactly," agreed Donna Arnett, a genome scientist at the University of Alabama at Birmingham and president elect of the American Heart Association, but "without [the HGP], it wouldn't have happened."

The US government poured a total of $3.8 billion into the HPG between 1988 and 2003 -- an investment that has returned 10-fold just considering the $49 billion in taxes paid by genomics-enabled industries. In total, the genomics industry and the other industries it supports have generated $796 billion in economic output since the inception of the HGP -- a return on investment of 141 to 1. In other words, for every $1 of federal HGP funding, $141 have reentered in the economy.

"That's a pretty amazing return on investment," National Institutes of Health director Francis Collins told The Scientist in an email. "From the 15,000 fold drop in the cost of DNA sequencing to the increasing use of personalized medicine and pharmacogenomics, this study demonstrates that the human genome project has indeed been transformative."

The project also generated 3.8 million job-years of employment (310,000 jobs in 2010 alone) and led to nearly $250 billion in personal income -- an average of $63,700 in personal income per job-year. "The public understands that the economic value of medical and health research is tremendous for the United States," Mary Woolley, president and CEO of Research!America, said in an email. "I hope that our nation's elected officials take heed of the value demonstrated by the Battelle report issued today to reassess any plans to cut research in the FY2012 budget."

Correction: This story has been updated from its original version to correctly state that Donna Arnett is the president elect of the entire American Heart Association. The Scientist regrets the error.