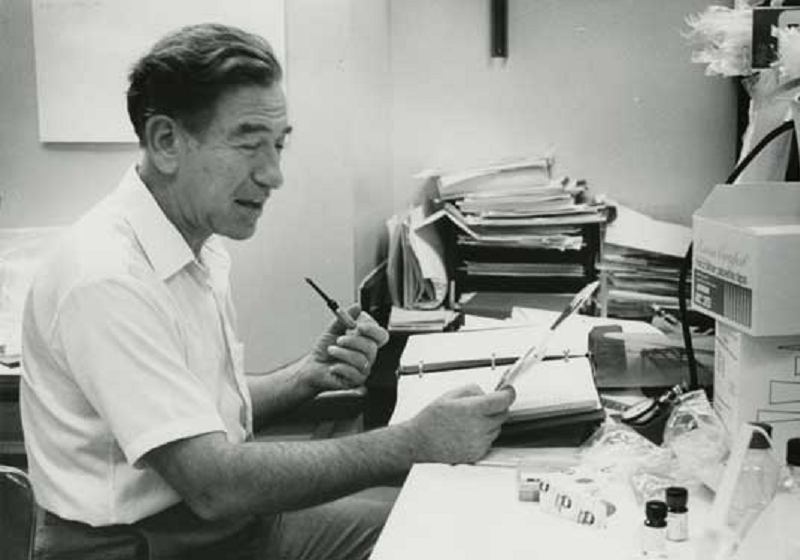 Stanley Cohen, a biochemist awarded the 1986 Nobel Prize in Physiology or Medicine for his work on cell growth factors, died last Wednesday (February 5). He was 97.

A professor at Vanderbilt University from 1959 until his retirement in 1999, Cohen was known for his 1962 discovery of epidermal growth factor (EGF), a protein that stimulates cell growth and differentiation and plays an important role in tumor development and metastasis.

“[Cohen’s] studies of growth factor signaling illustrate the powerful impact of basic research,” Lawrence Marnett, dean of basic sciences at Vanderbilt, tells The Tennessean. “Stan’s work not only provided key insights into how cells grow, but it led to the development of many drugs that are used to treat cancer.”

Born in Brooklyn in 1922, Cohen was educated in the New York public school system before earning an undergraduate degree with majors in chemistry and zoology from Brooklyn College in 1943. From an early age, “I remember being interested in how things worked: taking apart an old telephone and the gears of my new 4-speed bicycle was most enjoyable,” Cohen wrote in a 2008 article about his work in the Journal of Biochemistry.

He earned a masters in zoology from Oberlin College in 1945 and a PhD in biochemistry from the University of Michigan in 1948. After a few years at Colorado State University studying metabolism in premature infants, he moved to Washington University in St. Louis, working first in the radiology department and later the zoology department, before taking up a position as assistant professor at Vanderbilt.

It was at Wash U that Cohen met the biochemist Rita Levi-Montalcini, with whom he would study the structure and function of as-yet undiscovered growth factors, such as nerve growth factor, during the mid-1950s. Levi-Montalcini shared the Nobel Prize with Cohen in 1986.

Cohen received a number of awards during his career, including the National Medal of Science and the Albert Lasker Basic Medical Research Award. His work has helped inspire decades of research into drugs such as gefitinib and cetuximab that target growth factor receptors as a means to slow or prevent cancer development.

“Stanley Cohen is someone I have always looked up to—as a fellow academic who studied cells, a visionary researcher and an optimistic spirit,” says the interim chancellor and provost of Vanderbilt University, Susan Wente, in a statement. “He advanced scientific inquiry in many ways, saving countless lives, inspiring others and earning him the Nobel Prize. His work shows that bold research can have a real impact on our world and the people within it, and it will forever connect him to Vanderbilt’s mission.”

Cohen is survived by his wife, three children, and two granddaughters.