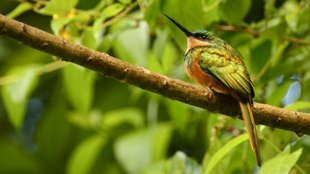 Rufous-tailed JacamarDANIEL KARPBirds living in the rainforests of Costa Rica represent around 4.1 billion years of evolutionary history, while those that occupy nearby farmland can represent as little as 3.3 billion years, according to a paper published today (September 11) in Science. While the results suggest that agriculture diminishes phylogenetic diversity, researchers have also found that farms with mixed agriculture support far greater diversity than those with intensive monocultures.

“We’ve known for a while that intensive agricultural monocultures tend to have lower numbers of different species than diversified agricultural systems, which themselves tend to have lower numbers than undisturbed forests,” said Walter Jetz, a professor of global biodiversity, ecology, and conservation at Yale University who was not involved in the work. “What this study now adds is that, it is not just the count of different species but also the amount of evolutionary history, or phylogenetic...

Assessing the biodiversity of a given environment was traditionally accomplished by counting the number of species present, said Daniel Karp, a postdoctoral scientist in the department of Environmental Science, Policy and Management at the University of California, Berkley, who led the study. Indeed, study coauthor ornithologist Jim Zook of Costa Rica has spent the last 12 years documenting birds at 44 different forest and farm sites across the country. “Six times a year—three times in the wet season, three times in the dry season . . . he would walk along each line for 30 minutes and count up all the birds that he saw or heard,” explained Karp. “But what hadn’t been done at all anywhere, to our knowledge, had been looking at the biodiversity in a more evolutionary context.”

Then in 2012, Jetz and his colleagues published a paper in Nature describing the global phylogeny of birds. “It basically maps how related every bird is to every other bird in the entire world,” said Karp.

Armed with this bird family tree and Zook’s extensive data set, Karp could not only ascertain which birds inhabited which areas, but also how related they were. Undisturbed forests were clearly “the best way to preserve all that evolutionary history,” said Karp, noting that “diversified farms really out perform the intensive monocultures. They conserve a lot more species . . . and a lot more phylogenetic diversity”—spanning an additional 590 million years of evolution.

While not particularly surprising, the results are still important, said Thomas Smith, a professor of ecology and evolutionary biology at the University of California, Los Angeles. “It’s one of those things where there are a lot of biologists out there thinking, ‘Yeah, this is probably happening,’ but they went out and actually tested it.”

Smith added that maximizing phylogenetic diversity is critical for conservation efforts. “It’s analogous to maintaining a balanced stock portfolio,” he explained, adding that the study points to the need to preserve undisturbed forests.

Another take-home, said Karp, is that the diversification of agricultural land should be encouraged. “We know that birds provide benefits to growers—by consuming pests, for example,” he said. The next step is to “figure out whether it is actually profitable for these farmers to begin to engage in some of these conservation activities.”