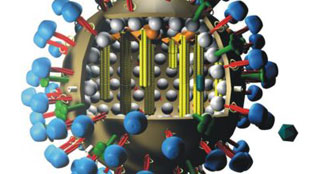 3-D model of flu virusWIKIPEDIA, M EICKMANNTwo types of bird flu—H5N1 and H7N9—have sparked concerns about a potential pandemic. Both viruses can cause severe illness and death in people, but mercifully, neither can spread easily from person to person.

That might soon change, however. According to a study today (June 6) in Cell, some strains of both viruses are just one mutation away from getting a better grip on the cells in our upper airways. If wild viruses accrue those mutations, they may find it far easier to spread from infected to uninfected people, increasing the risk of a pandemic.

Ram Sasisekharan of the Massachusetts Institute of Technology, who led the study, hopes that the findings will help public health officials monitor wild viruses, as well as aid in vaccine development. “These viruses are rapidly evolving and our stockpiles of vaccine are largely based on outdated strains,”...

Flu infections begin when the hemagglutinin (HA) protein on the virus’s surface recognizes glycan molecules on host cells. Birds and mammals have different glycan receptors, and wild H5N1 and H7N9 viruses bind more strongly to the bird versions. This creates a natural barrier that prevents the viruses from easily spreading between humans.

Last year, Ron Fouchier from the Erasmus Medical Centre in Rotterdam, The Netherlands, and Yoshihiro Kawaoka at the University of Wisconsin–Madison identified two sets of amino-acid-changing mutations in HA that allow H5N1 to spread through the air between caged ferrets. Both sets included mutations that help HA stick to human receptors.

But these studies started with old H5N1 strains from 2004 and 2005, however. When Kannan Tharakaraman, a postdoc in Sasisekharan’s team, analyzed the HAs of more recent strains, he found that the receptor-binding mutations that Fouchier and Kawaoka identified were not enough to cause the viruses to preferentially bind to human receptors. “If those mutations were incorporated into current circulating strains, we didn’t see that switch,” said Sasisekharan.

Thus, rather than focusing on these previously identified mutations, the team took a new approach. They modeled the way HA interacts with different glycans, and identified four structural features that bestow the protein with a preference for human receptors over bird ones.

Next, they rated each of HA’s amino acids according to how strongly it interacts with the rest of the protein and the host receptors. “You pay a huge penalty for mutating a heavily-networked amino acid,” explained Sasisekharan, “but less networked ones have more flexibility to change.” By studying these networks, the team determined a list of mutations that were most likely to produce a receptor switch.

Finally, they analyzed the diversity of existing H5N1 strains and found that many wild viruses are already tantalizingly close to becoming potentially contagious among humans. Almost all H5N1 lineages already have at least one of the four key structural features that could allow the virus to more easily bind human glycans, and some strains have two or even three of these features. One strain, which was isolated in Egypt in 2010, will prefer human receptors over birds ones if a single amino acid were to change from glycine to leucine.

The team applied the same approach to H7N9—a recently emerged strain of flu that has infected more than 130 people in China this year. The virus’ proteins show many signs of adaptation to humans, and previous studies predicted that its HA should bind strongly to human receptors.

But that’s now what Sasisekharan found. “The wild [H7N9] virus bound very poorly to the human upper airway tissues,” he said. This is consistent with a recent report suggesting that the virus can spread through the air between ferrets, but inefficiently so. However, the team also found that a single change—swapping the 228th amino acid from glycine to serine—was enough to give the viral HA an affinity for human receptors. “Should this mutation happen, we would expect that the virus would transfer between humans more efficiently,” said Sasisekharan.

“Structural analyses of HA have made a tremendous impact on our understanding of influenza adaptation,” said Fouchier. However, he cautioned that “we know very little about the actual receptors in human airways that are relevant for flu viruses.” Even the so-called “human” receptors can vary significantly, and it’s unclear which ones are found in different parts of the airways, or how common they are.

Sasisekharan suggested that viruses carrying the mutations he identified should be tested in ferret experiments to see if they genuinely are more efficient at spreading between mammals. However, given the controversy surrounding the development of potentially contagious flu strains, Fouchier wonders “whether we would be allowed to empirically test this newly acquired knowledge in animal models.”