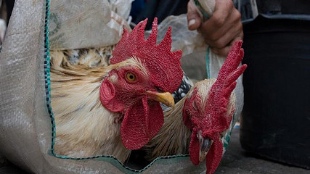 To date, the World Health Organization (WHO) reports that 586 people have been infected with H5N1 bird flu worldwide and that 346 of those people have died, for a fatality rate of 59 percent. But a meta-analysis pooling infection data from field studies worldwide, published online today (February 23) in Science, found many less serious cases that would have gone unreported—suggesting that the virus may be more prevalent but less fatal than those numbers suggest.

“It’s something that a lot of virologists have probably suspected: that [H5N1 infections have] been underreported,” said flu virologist John Wood at the United Kingdom’s National Institute for Biological Standards and Control, who was not involved in the research. “It’s a difficult concept to get your head around because H5N1 is a dangerous virus and, if what they’re suggesting now is that sometimes it doesn’t cause serious illness, that really needs...

Several factors drove virologists’ suspicions that the official WHO numbers on the infection and fatality rates of bird flu are imperfect. Many H5N1 cases occur in isolated areas in Asia and, if symptoms aren’t serious, an infected person probably wouldn’t even visit a hospital, leaving the case unreported.

“Outbreaks in the poultry wax and wane, and there can be introductions by wildlife,” said epidemiologist Gregory Gray from the University of Florida, who did not participate in the research. “One can only hypothesize regarding how many people were truly being exposed.”

Additionally, even if the infected person’s symptoms are serious enough to warrant a hospital visit, for the case to enter the WHO’s official record, the H5N1 infection has to be confirmed by two different tests. The most stringent test, a microneutralization assay, is expensive, restricting its use in impoverished areas where these viruses often emerge. The more common, cheaper test—the hemagglutination inhibition assay—“just [doesn’t] work too well for H5N1,” said Wood, generating false negatives unless an updated protocol is used.

With these suspicions in mind, many researchers have taken to the field, testing populations hit by the virus for the H5N1 antibody to get a better grip on the infection’s prevalence. But many of these studies are small, only encompassing a village’s worth of people, for example, or those working on a chicken farm.

A group of researchers decided to pool data from 29 published papers and perform a meta-analysis that might yield more robust results than any individual study. In a primary analysis, they only used those studies that fell within WHO guidelines—confirmation by two tests—for a total of around 7,300 people tested for infection, excluding cases reported to the WHO. In a secondary analysis, they looked at studies that didn’t fit with the WHO criteria but appeared to be H5N1 infections based on other evidence, for an additional 6,500 cases. In each analysis, the H5N1 infection rate was 1–2 percent, or a couple hundred cases that had gone unreported because they did not cause severe illness or death.

“Theoretically that would mean that [the fatality rate] is not as bad as it seems, but it’s quite hard to put a number on how much lower,” said immunologist Timothy Powell of the University of Oxford, who did not participate in the research.

The analysis is still not a precise estimate of the virus’s prevalence, however, because there is much variability in viral detection between labs. Wood performed a study where he sent human serum containing flu antibodies to several labs, and the results varied widely by several orders of magnitude. Thus pooling data from so many studies using slightly different methods—even for the same assays—“throws the results from the study into a bit of a cloud because we don’t know necessarily that those labs have similar efficiencies,” Wood said.

Additionally, the assays themselves aren’t foolproof because antibodies from different flu viruses occasionally react with H5N1, generating a false positive. “A lot of people have had multiple flu infections in their life,” and especially in H5N1-afflicted areas of Asia, “flu viruses are much more common,” said Powell. “It’s quite hard to prove that it’s H5N1 virus and not a closely related virus.”

Despite the uncertainty, the results do point to the possibility that H5N1 is not quite as fatal to humans as currently believed. “It gives a better picture of what the threat is that is out there,” Powell said. But while that’s good news for those fearing a pandemic, it doesn’t change the fact that that risk still exists. The new research “doesn’t fundamentally change the concern” about the doing research on H5N1 virulence and transmissibility, said John Steinbruner, an international security researcher at the University of Maryland. “The real issue is: how do we handle this situation in the future?”