Avian influenza viruses can remain infectious in the surface water of northern US wetlands for at least seven months, according to a study published yesterday (September 9) in Proceedings of the Royal Society B. Using a combination of lab and field experiments, researchers at the United States Geological Survey (USGS) showed that viruses shed by wild ducks were still viable after more than 209 days in situ, suggesting that these areas could act as environmental reservoirs for the pathogens while birds overwinter in areas further south.

“It’s saying to the scientific community we need to get serious about the role the environment plays in the transmission of avian influenza,” says Chelsea Himsworth, a veterinary pathologist at the University of British Columbia and the Canadian Wildlife Health Cooperative who was not involved in the work. “The environment tends to be neglected” in disease studies, she says, but the new findings suggest “maybe viruses are hiding out in these waters, maybe they’re surviving for long periods, they’re re-infecting birds between migration cycles.”

Avian influenza, or bird flu, is caused by influenza A viruses, which are common in wild birds and can cause economically damaging outbreaks in poultry when transmitted via droppings or contaminated water or surfaces. Although avian influenza viruses typically pose no direct threat to humans, there have been occasional reports of infections in people who work with domesticated birds and, very rarely, person-to-person transmission, making surveillance of the viruses an important public health focus.

Previous work by various research groups had already shown that avian influenza viruses could remain infectious in water for long periods in the lab, notes USGS research scientist Andy Ramey. But these studies typically use “really controlled settings,” he says. While such research is important for learning about the effects of temperature, pH, and other water conditions on virus viability, “it’s not really realistic of any ponds or lakes that I’m familiar with.” 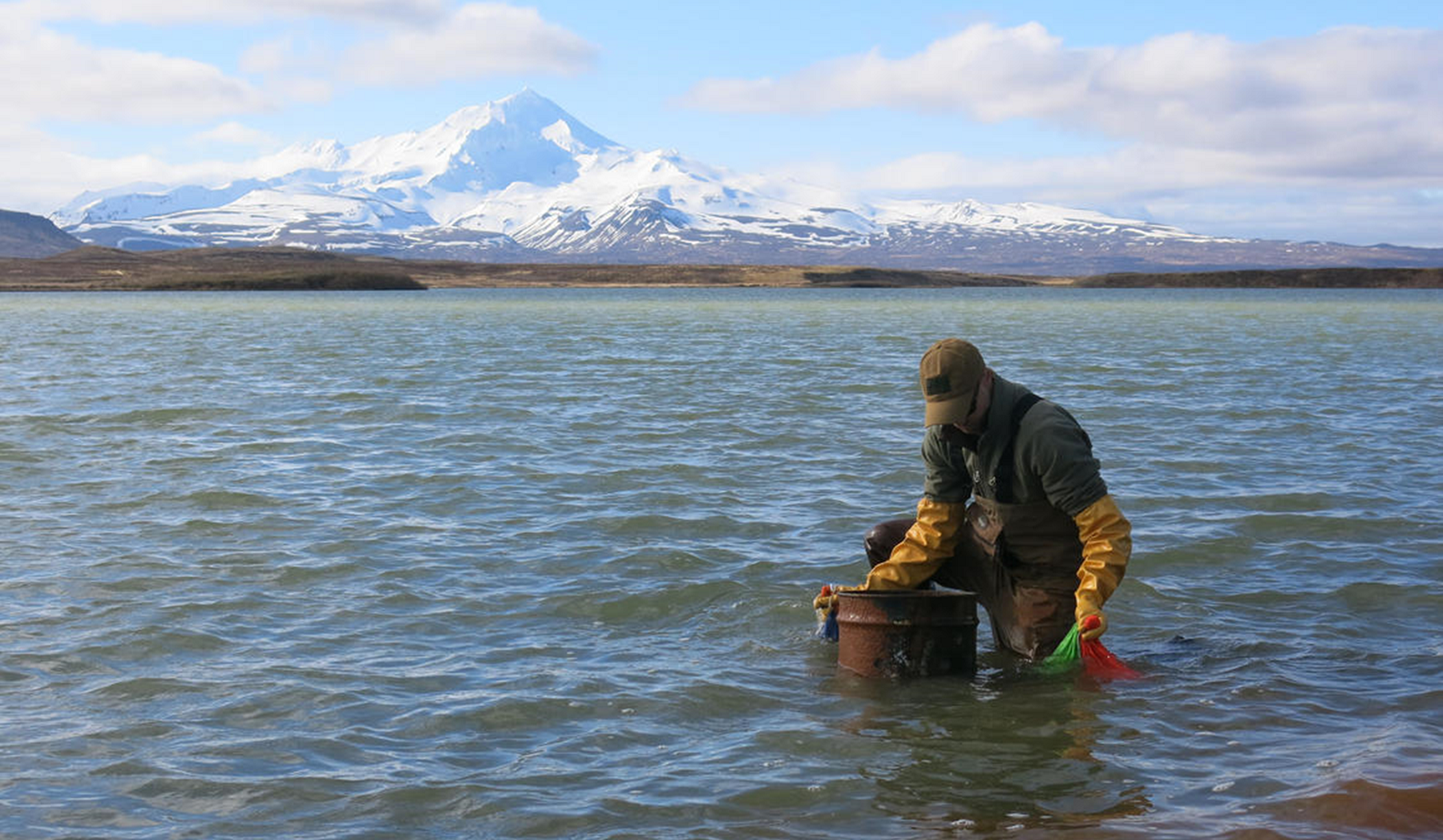 To get a better idea of the viruses’ persistence in the field, Ramey and colleagues collected and filtered water from wetlands in Alaska and Minnesota in late 2018, and inoculated those water samples with swabs taken from ducks. They then took half of the samples to the lab to be maintained in constant conditions and put the other half into perforated steel drums that they left submerged in the wetland sites the samples had come from.

Initial genetic analyses of the lab-kept samples revealed several avian influenza strains such as H3N8 and H4N6. By testing those samples every month over the winter of 2018–2019, the team found that although the amount of viable influenza virus declined over time, about 13 percent of the samples that had tested positive at the beginning of the experiment still yielded viable virus around seven months later.

Analyses of the wetland-stored samples in spring 2019 produced similar findings: around one-fifth of the samples that had contained viable virus at the beginning of the experiment still contained viable virus after 209–229 days stored in situ. Genetic sequencing confirmed that the viruses at the end of the experiment were the same ones detected at the beginning—not the result of environmental contamination, Ramey says.

In an additional experiment, the researchers confirmed that the influenza viruses contained in the wetland-stored samples really were still infectious by inoculating live mallards. Of nine samples the team used to inoculate different ducks, at least two—one sample from Minnesota and one from Alaska—caused infections in the birds, they report in their paper.

Ursula Höfle, a veterinary scientist at the University of Castilla-La Mancha in Spain, says the work is “one of the studies we really needed.” She notes that researchers studying avian influenza often detect almost genetically identical viruses in populations of ducks from season to season—an unexpected finding given the fast rate at which these viruses evolve within hosts. If infectious virus can stick around in the environment when bird populations aren’t there, that could explain this observation, she says.

It’s saying to the scientific community we need to get serious about the role the environment plays in the transmission of avian influenza.

Björn Olsen, an infectious diseases researcher and physician at Uppsala University in Sweden, calls the study a “very valuable contribution to understanding how this virus circulates in the environment.” Olsen, who has previously collaborated with Ramey but was not involved in the current study, notes that the findings could have implications for wetland management. “It’s more and more popular now to build new wetlands in green areas all over the world,” he says. “I think it’s important to realize there can be some negative effects [of this] as well.”

While the findings provide a proof of concept that viable virus can persist in the environment, researchers who spoke to The Scientist caution that more work is needed to confirm how significant this phenomenon is as a cause of bird infections. Höfle points out, for example, that filtering water samples removes bacteria, algae, and other components of real-life aquatic systems that may affect virus infectivity over time.

It also remains to be seen how broadly the findings apply beyond northern US states, says Ramey. The team collected additional samples from Louisiana in the study, but initial tests after those lab samples had been inoculated with duck swabs didn’t detect any viable virus—perhaps because of the temperature or pH conditions of the water itself—although some tested positive for viral RNA. The Minnesota and Alaska data hinted at potential differences between those states’ wetlands, too, with viable virus being found more frequently in Minnesotan samples than in Alaskan ones.

This kind of variation in virus infectivity with geography and specific environment will be an important avenue to explore in the future, says Himsworth, particularly for researchers who want to understand how future environmental changes may affect disease transmission or for studies that attempt to use environmental samples as part of virus surveillance. “I think the variability they even found within the study points to the fact that all of us, in our jurisdictions, need to get to know our own back yard.”