On May 25, Christian Cooper was bird-watching in New York City’s Central Park when he asked a woman to put her dog on a leash, as was mandated for the area. The woman responded to the request by saying she was going to call the cops and she was “going to tell them there is an African-American man threatening [her] life.” As evidenced by the video taken by Cooper during the exchange, she did just that and urged the police to come immediately.

While the incident was unique in making national news, in its aftermath, scores of Black birders, naturalists, and ecologists recounted experiencing white onlookers calling the police on them while in outdoor spaces. One birder, for instance, tweeted that after having dealt with many police calls, he now displays a sign to explain what he’s doing while in natural areas. In June, a geoscientist shared a 10-minute-long video describing how survey work yields daily stares and sometimes tense encounters with people displaying neo-Nazi or other white supremacy symbols.

“Unfortunately, the safety of Black naturalists continues to be an issue,” Angelica Patterson, a PhD candidate at Columbia University, tells The Scientist in an email.

Cooper’s encounter—combined with uproar over the deaths of George Floyd, Breonna Taylor, and other Black Americans at the hands of law enforcement—have propelled a number of initiatives to raise the profile of Black people in STEM and awareness of the continuing effects of racism.

In the immediate aftermath of the incident in Central Park, economist Anna Gifty Opoku-Agyeman had the idea of celebrating Cooper and other Black birders. Black Birders Day was born, with a goal of providing a space for Black naturalists to get to know one another and show that interest in birding and other outdoor activities is not exclusive to white people.

Opoku-Agyeman, a cofounder of The Sadie Collective, an organization dedicated to helping Black women break into the world of finance and economics, shared her idea on Twitter and had conversations with others in @BlackAFInSTEM, an organization for Black scientists. She realized that Cooper’s experience wasn’t a one-off incident, but that racist encounters were common while out in the field, she tells The Scientist.

Enthusiasm for Black Birders Day spread on social media, and what was meant to be a day stretched into the first-ever Black Birders Week, which ran from May 31 through June 5. Each day featured a theme and encouraged Black birders to share pictures of themselves in nature or of their favorite bird species. Thousands of tweets went out with the hashtag #BlackBirdersWeek, and the event attracted attention from some high-profile organizations, including the National Audubon Society.

The success of the event led to the creation of #BlackInNature, a social media space where Black ecologists and naturalists of all kinds, not just birders, can connect.

From there, Twitter exploded with Black scientists celebrating their disciplines. Soon, #BlackInAstro, #BlackInNeuro, #BlackInCardio, #BlackInMicro, and others had their own awareness weeks and were garnering international participation. As momentum grew, the awareness weeks progressed beyond hashtags and began integrating live events with expert speakers and sessions focused on career development. Researchers who are members of other underrepresented minority groups also created their own accounts and hashtags, such as @LatinxinSTEM and #LGBTQinSTEM.

“If you had asked me a month ago, ‘Who are the other Black microbiologists?’ . . . I would have had one, maybe two people that I would have known offhand,” Black in Micro co-organizer Ariangela Kozik, a postdoc at the University of Michigan, tells The Scientist. Now, because of Black in Micro Week, “I know at least 30 very well, and about 100 more.” 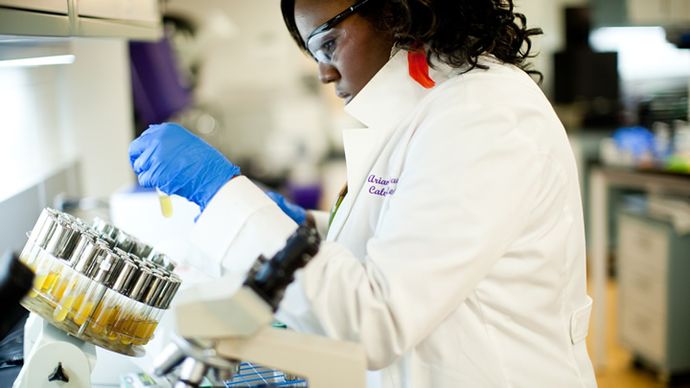 “We’re all one cohesive group that needs each other in order to move forward. We’re not an island or a silo,” Kozik explains. All of the different groups, collectively known as “Black in X,” connect via Slack, where they discuss the logistical challenges of pulling off an awareness week and share advice. “It kind of solidifies the fact that we are not out here on our own,” Kozik says. “Now that we can finally see each other, we can now support each other.”

The topics of the events, which are still ongoing, vary from week to week, and increasingly include career development sessions. Black in Chem, for instance, held a live “elevator pitch” contest, encouraging participants to present their research and interests succinctly. The microbiologists discussed the science around the COVID-19 pandemic, and the neurologists addressed the need for mentorship.

Moving forward, each group is taking a slightly different approach so that their organizations become lasting entities, not ephemeral Twitter trends. Some groups have already planned their awareness weeks for next year and have ongoing digital meetups to stay in touch with one another. Black in Neuro held a digital mini-conference for October 31 through November 4.

Because of how interdisciplinary modern science is, some scientists are able to participate in multiple weeks, growing their networks and learning about other areas they might not be well-versed in. This isn’t good just for Black scientists, it’s good for science, says Ayanna Jones, a leader within Black in Chem and a PhD student at Emory University.

It hasn’t been long enough to say what the lasting effects of this movement will be, but several of the organizers who spoke to The Scientist shared that as a result of growing awareness of the issues faced by academics who are members of underrepresented groups, their institutions have been undertaking conversations about acknowledging racism and assessing what needs to be done to create lasting change.

“Systemic bias in the workplace, unwelcoming spaces and cultures in science departments, and outright harassment of people of color venturing outdoors have prevented opportunities for all of these spaces and visible roles to be diversified,” says Patterson. “When doing science work or recreating in the outdoors alone, [Black] individuals will have to be more cognizant of their surroundings, be mindful of what time of day they are going outside, and be prepared with a way to communicate with friends, family members, or authorized person of a park or forest if one finds themselves in a hostile situation.”

Several organizers also pointed to the prevalence of microaggressions, acts that don’t constitute outright discrimination, but lead to feelings of discomfort and exclusion. This can include giving compliments with a racial caveat, such as, “You’re so articulate for a Black woman,” negating lived experiences by saying “I don’t see color,” or questioning a person’s qualifications.

“Especially with Black women, people don’t believe us when we say things,” explains Devin Swiner, a graduate student at the Ohio State University and one of the organizers of Black in Chem. “People are always trying to check my credentials. If I say something in a group meeting, then people might not take me seriously. But if my advisor or another man in my lab is like, ‘Oh, no, Devin had a really great point,’ then it’s like, ‘Oh, maybe Devin knows what she’s talking about.’ That happens pretty often.”

By themselves, these behaviors are irritating, says Jones, but they can snowball into an unwelcoming, unhealthy culture. “So it’s all these microaggressions building up and the next thing you know, you have a macroaggression,” Jones explains. “There’s all these statistics about the lack of Black people in STEM, but let’s break that down. Where did that begin? And what is the root cause?”