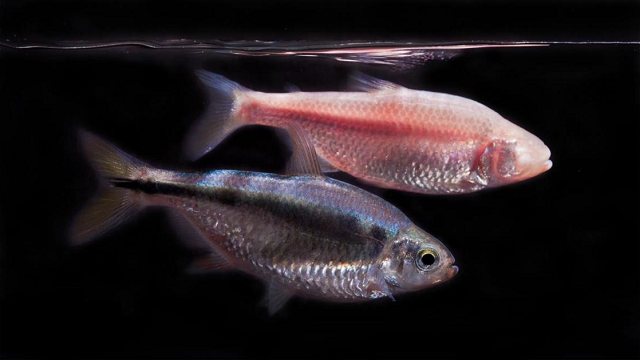 Surface-dwelling (gray) and cave-dwelling (pink) morphs of Astyanax mexicanusFLORIDA ATLANTIC UNIVERSITY, ALEX KEENERiver-dwelling populations of the Central American fish species Astyanax mexicanus sleep for more than 10 hours each day. But eyeless, cave-dwelling members of the same species barely sleep at all, and show no obvious health or developmental problems as a result. Now, researchers in the U.S. and in France have identified the signaling pathway behind this difference, offering a glimpse into the processes regulating sleep duration in vertebrates. The findings were published yesterday (February 6) in two papers in eLife.

In one study, researchers at Florida Atlantic University compared the brains of cave-dwelling A. mexicanus with their surface-living cousins. They found that the number of neurons producing hypocretin—a neuropeptide linked to sleep-disorders such as narcolepsy when dysregulated—was significantly higher in the cave dwellers. What’s more, inhibiting hypocretin signaling genetically or pharmacologically increased cavefish’s sleep...

“These findings suggest that differences in hypocretin production may explain variation in sleep between animal species, or even between individual people,” study coauthor Alex Keene of Florida Atlantic University’s Brain Institute says in a statement. “It may also provide important insight into how we might build a brain that does not need to sleep.”

The second paper also reported differences in hypocretin neuron number in cave-dwelling and surface-dwelling A. mexicanus. In addition, the researchers found that the changes emerged early on in cavefish development—as soon as 10 hours after fertilization, study coauthor Jorge Torres-Paz, a postdoc at the French National Center for Scientific Research (CNRS), notes in a statement. “This suggests the mechanisms that lead to the loss of eyes could be shared in part with those that control developmental evolution of brain and behavior, including sleep.”

In addition to shedding light on human sleep disorders such as narcolepsy and insomnia, cavefish could provide insight into the mechanisms of environmental adaptation, notes CNRS group leader and coauthor on the second study, Sylvie Retaux. “A. mexicanus cave-dwellers have developed this and other beneficial behaviours that allow them to live in adverse environments,” she says in the statement. “This makes them a prime model to study the evolution of brain development and its behavioural consequences, providing greater understanding of how vertebrates colonise more unusual locations.”