The only tools that clinicians have to predict when a baby will be born are ultrasound and the date of the mother’s last menstrual period, which pin the expected arrival to a five-week window. Even more immediate clues, such as the length of the cervix or how dilated it is, aren’t always good labor predictors. It’s even more difficult to nail down the timing of a preterm birth.

In a study published this week (May 5) in Science Translational Medicine, researchers used samples from 63 individuals in the final 100 days of pregnancy to narrow the prediction window to as short as two weeks.

“Preterm labor is the number one cause of child mortality under the age of five in the world,” says Brice Gaudillière, an anesthesiologist at Stanford University Medical Center and a coauthor of the paper. His group is part of the Stanford Prematurity Research Center, a consortium of researchers and clinicians focused on studying preterm labor and birth in order to prevent it.

Before addressing preterm labor, though, the team wanted to understand the start of normal labor. “With the clinical tools that we have, we’re pretty imprecise or inaccurate at predicting the onset of labor,” Gaudillière explains.

We saw this progressing pregnancy that then transitions two to four weeks before delivery into this prelabor phase where a lot of proteins and metabolites and also the immune responses are changing.

In current clinical practice for monitoring pregnancies, a blood test called the quad screen measures levels of four different protein biomarkers made by the fetus, placenta, or ovaries, including human chorionic gonadotrophin—the same hormone that’s detected by home pregnancy tests. Aside from those screens and “a pretty poor test that rules out preeclampsia,” a pregnancy condition characterized by high blood pressure and protein in the urine, there are no other biomarker-based tests that provide information about how pregnancy is going, says Susan Fisher, a reproductive biologist at the University of California, San Francisco, who was not involved in the study. “This is such an important space to work in.”

Gaudillière’s team took between one and three blood and plasma samples from 63 pregnant women over the last 100 days of their pregnancies. They assessed 7,142 data points, including information about metabolites, proteins, and immune-related markers, from each sample from 53 of the subjects. Then the researchers used computer modeling to identify associations between the data points, the day the samples were collected, and the day labor started. They picked out the 45 most informative biomarkers, and from them developed a prediction tool to test on 10 remaining moms. The model predicted the time of labor onset within about two to four weeks for both preterm and normal births.

“We saw this progressing pregnancy that then transitions two to four weeks before delivery into this prelabor phase where a lot of proteins and metabolites and also the immune responses are changing,” explains Ina Stelzer, a postdoc in Gaudillière’s group. Because the dynamics are conserved between pregnancies, it’s possible to track them and, independent of gestational age, anticipate labor, she adds.

For instance, a surge in 17-hydroxyprogesterone, a hormone made by the placenta, was closely linked with the start of labor. And an increase in levels of interleukin-1 receptor type 4 (IL-1R4), the receptor for proinflammatory cytokine IL-33, was common in the last 30 days of pregnancy. Because IL-1R4 inhibits the actions of IL-33, the authors hypothesize that the receptor may regulate inflammation that arises in response to uterine contractions and exists at the interface between the fetus and mother during late pregnancy. 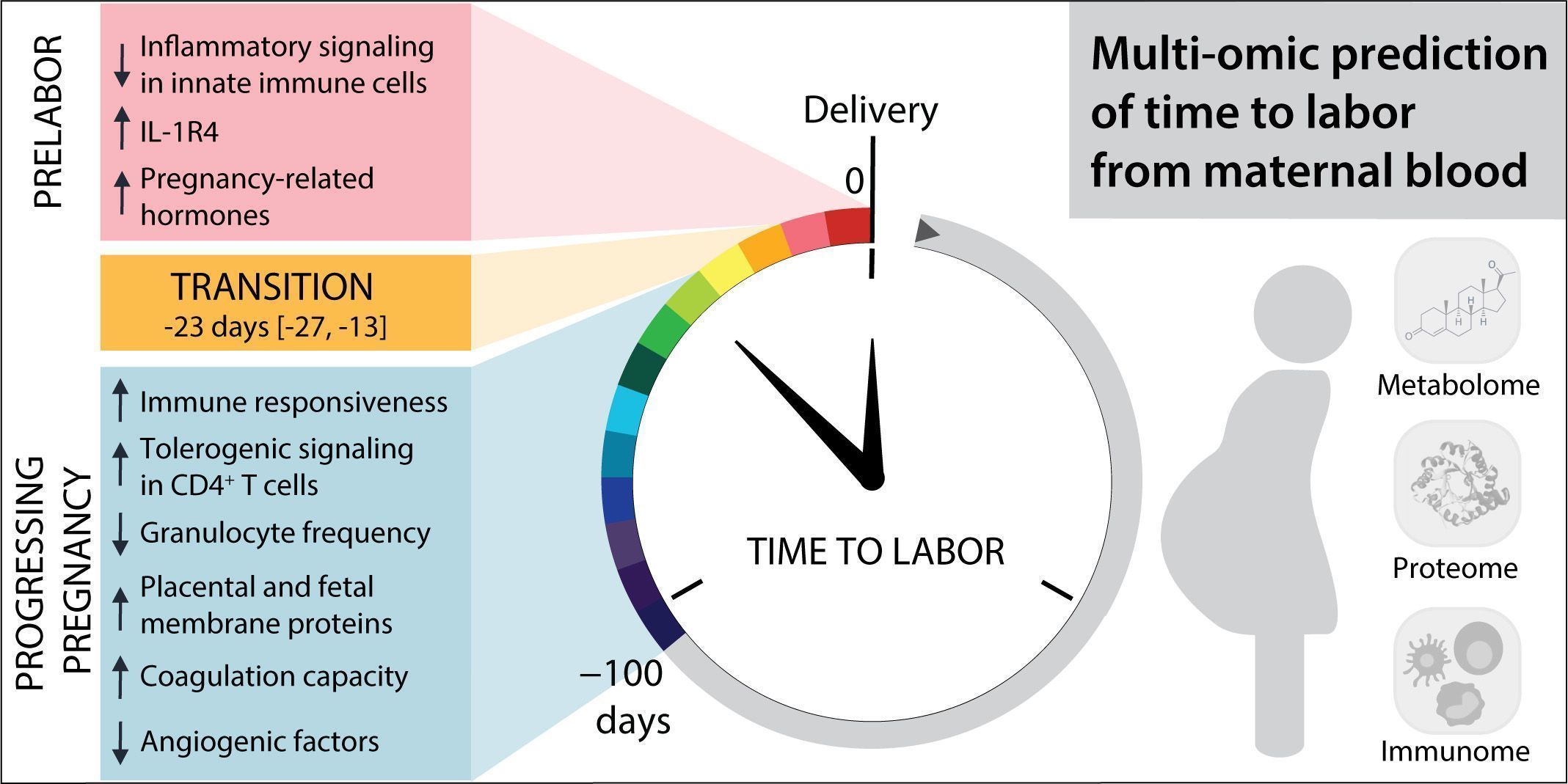 “The future for both biomarker discovery and also for understanding biological processes could lie in our ability to overlay these different levels of data,” writes Beth Holder, who studies placental biology at Imperial College London and was not involved in the work, in an email to The Scientist. Plus, the authors have looked at both soluble factors and cellular changes, which gives a much richer data set, she adds. “A future study could zoom in on this window and take a larger number of samples from each patient to pinpoint it more accurately and take a better look at the exact dynamics of these changes in individual patients.”

Stelzer, Gaudillière, and colleagues have taken the task of cataloging the trajectory of pregnancy to the next level, which will help identify pregnancy complications, says Petra Arck, who runs the research unit on maternal fetal medicine at the University Medical Center Hamburg-Eppendorf in Germany and did not participate in the new research. The long-term goal of work like this is to identify agents that may induce labor and then “therapeutically target these markers to prevent preterm labor.”

“This is a very interesting first step,” says Fisher. Before the team’s model could be applied to predict pregnancy complications, they’ll need many more samples, she adds.

To this end, the researchers are recruiting people in East Asia, Africa, Germany, and additional sites in the US. “Machine learning models only get better when you increase the sample size,” explains Gaudillière.