ABOVE: MODIFIED FROM © ISTOCK.COM BY THE SCIENTIST STAFF

Laura McCabe had been living a dual professional life at Michigan State University for more than a decade, studying bone in her lab while teaching medical students gastrointestinal physiology in the classroom, when she came across a call for proposals from the Crohn’s and Colitis Foundation. Could researchers look into how inflammatory bowel diseases affect bone? “I thought, ‘This is me!’” McCabe says. In 2007, with grant funding in hand, her two disciplines had collided.

Researchers already knew that patients with inflammatory bowel disease have bone loss; the question was why. In mouse experiments, McCabe found that exposing the animals to bacterial infections of the intestine or to a detergent that causes breaks in the gut’s epithelial barrier could lead to bone erosion. “It became clear [that] we could do all these bad things to the gut and make it...

She spoke with her Michigan State colleague Rob Britton, who suggested trying a probiotic he had been studying in his microbiology lab. He had found that the bacterium Lactobacillus reuteri promoted gut health, so perhaps it could help bones too, he reasoned.

I was just blown away. It was one of those times you find something very plausible that you never thought about before.

The two researchers tried it out in healthy male mice “just to see how it would go,” says McCabe. When the results came in, “we were flabbergasted actually.” Not only did the bacterium reduce intestinal inflammation, it also caused the mice to gain bone mass. The study, published in 2013, suggested that even among healthy mice, bone density was compromised by inflammation in the gut, and quelling that inflammation could provide a means to boost bone strength.

This gave them the idea that the microbiome had some role in regulating bone density. They then tested L. reuteri in estrogen-deficient mice, a model of the post-menopausal period during which women often lose bone density, and found that the treatment again prevented mice from losing bone mass.

In the years since, McCabe has been unraveling the threads linking gut bugs to inflammatory signaling to bone turnover. And she’s joined by a number of other investigators similarly following these connections and testing out various means of adjusting them to intervene against age-related bone loss.

Emory University’s Roberto Pacifici is a leader in the field of osteoimmunology, the relationship between the immune system and bone. For years, he had been working on the hypothesis that estrogen deficiency in menopause causes bone loss by activating T cells in the bone marrow, leading to the production of tumor necrosis factor (TNF) and other inflammatory cytokines, which promote the breakdown of bone tissue to release calcium, a process known as bone resorption.

Pacifici knew there must be an antigen that was kicking the T cells into gear, but he hadn’t pinned it down. Then in 2012, he read a paper showing that mice raised in a germ-free environment had higher bone density. “When I saw that article, I said, ‘Ah ha! The antigen must be something provided by the microbiota,” Pacifici says.

To find out if in fact the microbiota was the missing link, Pacifici’s group developed a germ-free mouse model that was also estrogen deficient. In line with his suspicions, the mice didn’t lose bone like estrogen-deficient animals with intact microbiomes did. In that same study, reported in 2016, the researchers also discovered that estrogen deficiency causes the gut to become more permeable to gut bacteria and their products. These leaked materials appear to be the stimulants that activate immune cells, which travel to the bone marrow, overproduce cytokines, and ultimately cause bone loss.

“I was just blown away,” Pacifici says. “It was one of those times you find something very plausible that you never thought about before.”

McCabe’s work has also shown that a strong gut barrier is critical to staving off bone loss. Breaches in the gut lumen can allow for bacterial endotoxins, metabolites, or vitamins to spill out and trigger inflammatory signaling that can lead to bone erosion. Resident immune cells of the gut are also surveilling for intestinal damage and then relaying the alarm to the bone marrow, revving up the bone-damaging immune response. “I think we’re going to find there are multiple things going on,” McCabe says.

Chad Novince, who is studying the microbiome’s role in skeletal maturation at the Medical University of South Carolina, has identified yet another means of communication between the microbiome and the skeleton: the “gut-liver-bone axis.” In 2017, he and his group described a study in which healthy, young adult mice with specific pathogens removed from their microbiomes had less bone than germ-free mice and also enhanced immune activity in the liver. From a suite of experiments looking at the differences between these two mouse types, Novince and his team concluded that gut microbes or metabolites they produce pass through the intestines’ mucosal barrier into  circulation, where they travel to the liver and fire up innate and adaptive immune responses that suppress bone formation while enhancing bone resorption.

The molecular triggers within bone that cause the loss of tissue aren’t perfectly nailed down, but McCabe and Pacifici have independently found that the signaling molecule Wnt10b, critical to bone formation and delivered to bone by immune cells, is an important factor. Meanwhile, McCabe and her colleague Narayanan Parameswaran and, separately, Novince have homed in on RANKL, a molecule important in regulating bone resorption.

Christopher Hernandez, a biomechanics researcher at Cornell University, and colleagues have discovered signs that vitamin K produced by microbes might be influencing bone formation directly. In results published in 2017, they found that mice with an altered gut microbiome during their early lives end up with weaker bones than control animals. A follow up metagenomics study of the animals’ gut bacteria published this year found differences in genes for the production of vitamin K. Hernandez hypothesizes that the vitamin makes it to the bone where vitamin K–dependent molecules such as osteocalcin use it to build the bone matrix.

“I think we’re right now at the very beginnings which of these mechanisms are influencing the bone,” he says. 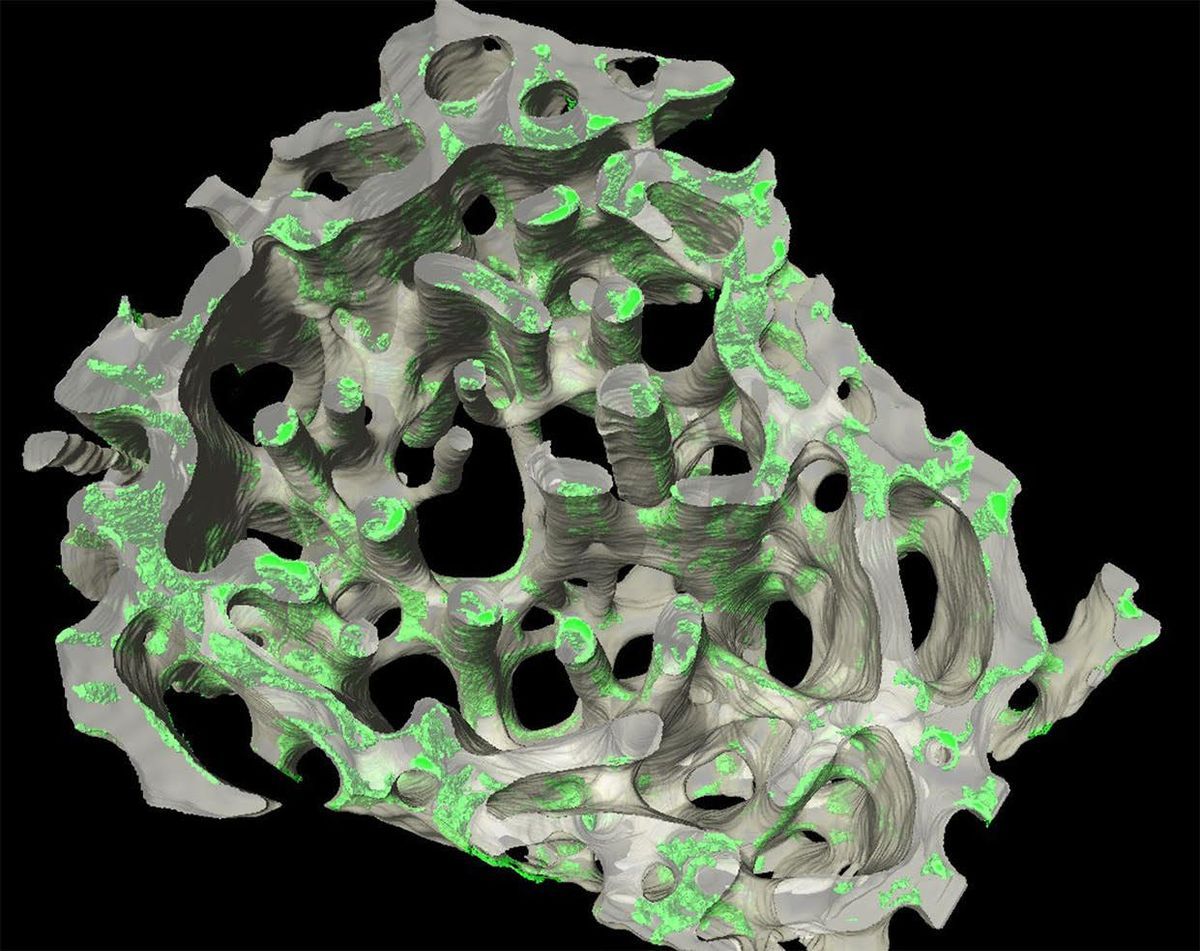 After Pacifici’s team had generated evidence of the link between microbiota and bone loss in estrogen-deficient mice, the researchers took the next step to see if manipulating the microbiome could help protect bones. They fed mice either the widely used probiotic strain Lactobacillus rhamnosus GG or a combination of seven bacteria, and in both cases the probiotics stimulated bone improvement among estrogen-deficient animals. He says there wasn’t much scientific rationale behind the choice of bacteria, they just happened to be popular. “I think the number of cells in dose is very, very important, perhaps more important than the type,” he says.

Some small clinical studies have looked at whether the results in mice translate to women. A group in Sweden, for example, published findings last year after giving older women with low bone density L. reuteri, the microbe McCabe and Britton have studied, or a placebo daily for a year. The loss of bone mineral density was lower among the women who took the probiotic. A few years earlier, Purdue University’s Connie Weaver and colleagues reported that soluble corn fiber, a prebiotic considered a food for commensal microbes, is able to essentially stave off the usual rate of bone loss in postmenopausal women.

“Once they lost the bone already, I didn’t think we could further protect them,” says Weaver. “I was pretty surprised.” Likewise in young people, Weaver found corn fiber supplements led to an increase in bone calcium, an indicator of bone density.

Weaver says the thinking is that pro- or prebiotics stimulate the production of short chain fatty acids, which trigger a pathway that ends up in the production of bone. Pacifici’s team recently produced supporting evidence for this mechanism in healthy mice, whose bone density benefited from probiotics. The model is that Lactobacillus produces lactate, which feeds the commensal bacteria Clostridia and Bacteroides. They then go on to produce the short chain fatty acid butyrate, which, when fed to mice on its own, stimulates bone growth just as well as the probiotic does.

McCabe says more clinical studies are needed to determine if the dietary interventions will be able to either treat disease or protect against normal bone loss. But she is optimistic that the field is moving forward. “I’m so happy when we’re all finding the same results in different places. . . . It strengthens it for translation.”