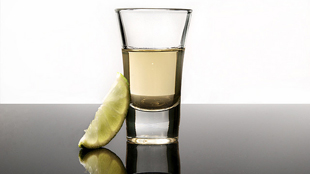 An apple a day keeps the doctor away, but what about a shot of tequila? It seems to work for fruit flies: Drosophila melanogaster seek out alcohol to kill off parasitic wasps living in their blood. Alcohol exposure also discourages the wasps from laying their eggs in the fly larvae in the first place.

The research, published today (February 16) in Current Biology, is the first evidence that animals may use alcohol to fight infection, the authors say.

“It’s an important paper in the field of self-medication,” said Michael Singer, who studies ecology and evolution at Wesleyan University in Connecticut. “It widens the scope of possibility when thinking about what sorts of animals might engage in self-medication.”

Drosophila are unique insects because they often subsist on the yeast growing in rotting fruits. The yeast convert the fruit’s sugar into energy through the process of fermentation, which produces ethanol as a byproduct. So fruit flies regularly spend their lives swimming in—and consuming—the alcohol, which is toxic for most organisms. They also spend their lives fighting off a tiny parasitic wasp, Leptopilina, which infects Drosophila by laying its eggs into fruit fly larvae and maturing in the flies’ bloodstream. “With examples of organisms using plants and fungal toxins as protection, we wondered if the flies were using alcohol in the same way,” said Todd Schlenke, a biologist at Emory University in Atlanta, Georgia, and senior author on the study.

Schlenke and colleagues performed three experiments to test their hypothesis. First, they questioned whether the presence of alcohol prevents flies from being infected in the first place. It did. Wasps laid significantly fewer eggs in fly larvae grown on ethanol-soaked food than those raised on control food.

Next, the team tested to see if consuming alcohol helps flies kill parasites after the flies have already been infected. Infected fly larvae were grown on either ethanol or control food, then dissected. The wasps inside the fly larvae consuming alcohol were dead or sick, while the wasps inside the control larvae were healthy and growing. “The wasp larvae just can’t handle alcohol in the blood of their host, and they die,” said Schlenke.

Finally, the researchers looked to see if the flies, once infected, would seek out alcohol as a remedy for their sickness. Once again, the conclusion was affirmative. In a divided petri dish, rich in ethanol on one side and not on the other, 80 percent of infected flies chose the ethanol food source, as compared to 30 percent of uninfected flies. “They’re self-medicating,” said Schlenke. “They’re getting drunk purposefully.”

In addition to demonstrating the innate behavior of fruit flies to self-medicate, the study suggests alcohol can be used as a therapeutic agent, said Schlenke. Anecdotally, individuals will claim that a few shots of hard liquor can cure a stomach bug. “No one has ever tested that,” said Schlenke, but it is possible that a burst of alcohol could hurt blood-borne parasites, like malaria. “Could it work for us too?” he asked. “It’s an interesting question.”

Clarification: This article has been updated to clarify that this is the first evidence that animals may seek to self-medicate using alcohol. The Scientist regrets any confusion.