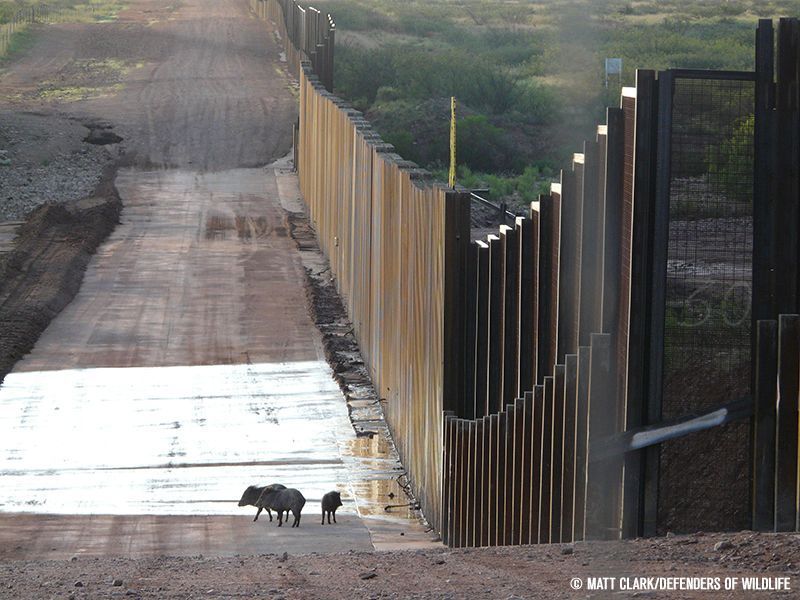 A family of javelinas encounters the wall on the US-Mexico border near the San Pedro River in southeastern Arizona.
Matt Clark / Defenders of Wildlife

More than 1,500 species of flora and fauna will be at risk of extinction if a continuous US-Mexico border wall is built, researchers declared in a report in BioScience yesterday (July 24). Following the call-to-action in the paper, more than 2,700 scientists from close to 50 countries have signed a petition opposing President Donald Trump’s plans to enclose the border.

“These borderlands are a global responsibility,” Rodolfo Dirzo, a professor of biology at Stanford University, says in a statement. “A constellation of Northern temperate and Southern tropical lifeforms and lineages coincide with endemic species, as in few areas of the globe.”

The wall would be an obstacle to resources and free movement of endangered species, such as the Peninsular bighorn sheep and Sonoran...

Already, the Department of Homeland Security (DHS) has built more than 650 miles of disjointed border walls, with $5 billion in more funding proposed by the House Appropriations Committee to build more.

The paper asks the DHS to take note of vulnerable borderland species and resources, and construct barriers conducive to the movement of animals. “What I’m hoping is that our national leaders and administration and congressional leaders will notice our report and listen to the concerns we have,” coauthor William Ripple, an ecologist at Oregon State University, tells The Washington Post.

“Debates about the border wall typically focus on immigration, economics and national security, but the harm to Americans’ natural heritage is an outcome rarely discussed,” coauthor Jennifer Miller, a senior scientist at the conservation organization Defenders of Wildlife, tells Quartz.