Bowhead whales produce some of the most diverse and complex songs of any mammal, according to a study published today (April 4) in Biology Letters. From 2010 to 2014, researchers in the U.S. and in Norway identified 184 distinct songs from a population of around 300 whales—a far more varied repertoire than their more studied cousins, the humpback whales.

“If humpback whale song is like classical music, bowheads are jazz,” study coauthor Kate Stafford, an oceanographer at the University of Washington’s Applied Physics Laboratory, says in a statement. Across the study’s duration, “not only were there never any song types repeated between years, but each season had a new set of songs.”

Bowhead whales can grow to more than 18 meters in length, live up to 200 years, and are the only baleen whales that spend all year in the Arctic. They are slow swimmers and have thicker blubber than any other species—factors that contributed to their near-extinction from hunting by the middle of the 19th century.

Using underwater microphones, the researchers made roughly 1,000 recordings each research season, and discovered an unexpected diversity in the whales’ songs. “Some sound absolutely haunting,” marine biologist Kit Kovacs of the Norwegian Polar Institute and the University Centre in Svalbard tells Reuters. “But others sound as though something wild is taking place in a barn.”

See “The Mystery of Whale Song”

Although the whales were recorded in a group rather than on their own, the researchers think that the songs are produced by males looking for a mate, Kovacs tells Reuters. “The song is usually only performed by males to communicate both with other males—‘I am bigger, stronger more motivated, et cetera’—and to females—‘I am big, strong and highly motivated.’”

The research represents “a huge step forward” in learning about the novelty and variety of bowhead songs, Susan Parks, a Syracuse University biologist who was not involved in the work, wrote in an email to the Associated Press. “The diversity of signal types uncovered by this study suggests that something very different is going on with bowhead whale song.” 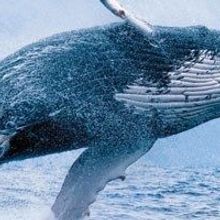