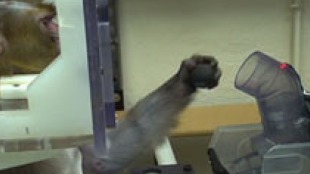 Scientists at Northwestern University have developed a device that allows monkeys to reach out and grab a ball, even though they cannot feel some of their arm muscles. A panel of electrodes implanted in the monkeys’ brains decodes commands from the motor cortex (the region that controls movements), while electrodes in their arms directly stimulate the appropriate muscles.

This electronic middle-man, known as functional electrical stimulation (FES), bypasses the spinal cord, and allows the monkeys to perform simple tasks despite their paralyzed muscles, whose connections to the brain have been temporarily disabled. Its inventors, who published their findings today (April 18) in Nature, hope that a similar system could help people with spinal cord injuries to regain control of their hands, giving them more independence in their daily lives.

“[It’s the] first step toward showing how FES and brain-decoding can be linked,” said neurobiologist...

FES is not a new idea. Existing systems can already restore movements to paralyzed limbs by directly stimulating muscles. But all of these are controlled by moving parts of the limb that are still active. A shrug of the shoulder, for example, might trigger a specific pre-programmed movement in a paralyzed hand. “The critical difference is that we’re taking the control signals from the brain,” said neurophysiologist Lee Miller of Northwestern University, who led the new study.

Working in Miller’s lab, postdoc Christian Ethier and graduate student Emily Oby trained two monkeys to pick up rubber balls and put them in a dispenser. While they did so, implanted electrodes recorded the electrical activity in their brains, arms, and hands. Ethier and Oby used these recordings to build a decoder that translates the monkeys’ brain activity into muscle movements.

Next, the team temporarily paralysed the flexor muscles that close the monkeys’ hands, by injecting anaesthetic into nerves in their elbows. “That model was very important, because we can turn it on and off,” says Miller. “We had no interest in actually injuring their spinal cords.”

Despite their paralysis, the implanted device—which relays the messages of the brain directly to the arm muscles via wires , bypassing the numbed nerves—allowed the monkeys to reliably move the ball on 80 to 90 percent of their attempts, compared to less than 5 percent of the time when the device was turned off. They could also carefully control the strength of their grip. When Ethier and Oby gave the monkeys a simple video game where they moved a cursor by squeezing a tube, they could apply just the right amount of force to hold the cursor in position.

Miller says that this setup has advantages over existing FES devices, which only allow people to make a few pre-programmed movements by performing specific motions, like shrugging their shoulders. With these systems, “the patient has to think about what they’re doing,” said Miller. “Our system provides significantly more flexibility and, although we can’t ask the monkey this, it seems to involve less cognitive burden.”

But the study is a “very simple demonstration,” Schwartz noted, in that the electrodes only stimulated three arm muscles. “In a truly paralyzed arm,” he said, “many more muscles would need to be activated to achieve more natural behaviours.”

Furthermore, the monkeys’ arms were only numbed for a short period of time, while real cases of paralysis last far longer. Over time, paralysed muscles become weaker, and the brain regions that control the immobile limb are re-tasked to other roles. “Will those changes revert back to normal if a human or monkey uses these prostheses?” Miller wondered. “We’re trying to extend the duration of the paralysis to allow long-term changes to occur, and see if we can reverse them.”

Another potential hurdle is that the team built their decoder by recording the muscle activity of freely moving monkeys, and such recordings would be impossible if patients are already paralyzed, said Chet Moritz from the University of Washington, who was not involved in the study. But this Miller doesn’t see this as a major obstacle. “We know more or less what the muscles will be trying to do for different movements, and we can make a good guess about a decoder. Then we adapt it,” he said.

Miller also doesn’t anticipate any problems in transfering the system to human patients. The muscle-stimulating electrodes are similar to those found in approved FES devices, and the brain-recording implants are already in use in ongoing experiments. “There are really no significant technical hurdles that would prevent us from taking this combined technology into humans,” Miller said.