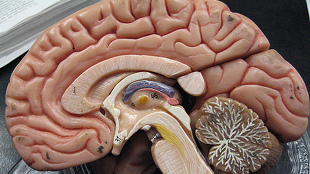 Scientists and philosophers alike have long grasped for the essence that makes humans human, and one answer lies in the brain. Specifically, human brains express genes in different patterns than those of related species, but what causes those changes is unknown. Comparing gene expression in three primate species—human, chimpanzee, and the rhesus macaque—across post-natal development, researchers, publishing today (December 6) in PLoS Biology, found that the most drastic expression changes are found in genes that are controlled at a distance by trans regulators, instead of locally by cis regulators.

“The authors here found a new explanation for how this evolution of the advanced human brain occurred at the molecular level,” said Henrik Kaessmann, who studies genomic evolution at the University of Lausanne in Switzerland and was not involved in the research. “It’s a very interesting message: that functionally relevant changes tend to be more trans driven.”...

Despite the minute genetic differences between human brains and their primate relatives, Homo sapiens cognitive ability is significantly more advanced, enabling us to “make complicated tools, come up with complicated culture and colonize the world,” said lead author Mehmet Somel, a postdoc studying human evolutionary genomics at the University of California, Berkeley. Because humans spend more than a decade developing into adults and learning, far more than the two or three years of chimpanzee adolescence, researchers have long suspected that developmental genes are involved in human brain evolution. “And the idea that brain gene expression profiles might be different between species was proposed 40 years ago,” Somel added.

To explore both of these ideas, Somel and his colleagues at the Max Planck Institute and the Chinese Academy of Sciences observed gene expression changes throughout postnatal development in humans, chimpanzees, and rhesus macaques. They analyzed the differential expression of around 12,000 genes in two brain regions—the prefrontal cortex and cerebellar cortex, each of which have been put forth as the focal point of human brain evolution. They found significant differences between species, as well as variation among the different aged organisms of a species, but they also found variation in gene expression that couldn’t be simply explained by either of these two factors. It seemed that there were some genes that were not only differentially expressed over the course of development, but also at a different rate by each species.

Looking closer at this group of genes, the researchers found that they were highly conserved, mostly associated with neuronal development or function, and were more frequently upregulated in the human prefrontal cortex, the brain region associated with abstract thinking, as compared with the other primates. But when the researchers searched for parallel expression of nearby genetic regulators that could explain the boost in gene expression, they often came up empty handed.

If the genes weren’t regulated locally by the so-called cis elements that sit right next to the genes they regulate, they must be regulated at a distance by trans elements—such as transcription factors that travel from afar chromosomes to control the expression of specific target genes. Searching the literature for transcription factors and microRNAs that fall into this category, the researchers identified microRNA candidates, and performed molecular experiments on three of them to confirm their involvement in the regulation of the differentially expressed genes.

“The big finding that it is a trans element is in some ways a lot more interesting to me than the specific [microRNAs] that they pulled,” said Eric Vallender, an evolutionary neurogeneticist at Harvard Medical School who was not involved in the research. The dominance of trans rather than cis regulatory changes is surprising, he said, and “has some fairly important implications for how we pursue these types of questions in the future.”

But while unexpected, the finding makes sense evolutionarily, said Genevieve Konopka, a genetic neuroscientist at University of Texas Southwestern Medical Center who also did not participate in the study. Adjusting the expression of each gene individually by cis regulators is complex, as cis regulators usually control only a single adjacent gene, while trans regulators can influence a variety of targets. And fewer adjustments that enact broad changes are more likely to occur in evolution than many minute tinkerings. “If you wanted to, for example, build a bigger brain in a faster or in a more complex way, you could manipulate key transcription factors or these microRNAs and regulate a bunch of targets,” said Konopka. “That would be faster…than doing it on a gene-by-gene basis.”

The next steps are to actually identify the functions of some of the trans-regulated genes, but this may be easier said than done, said Vallender. First of all, actually getting hold of such brain tissue, especially from chimpanzees, is very difficult, and nearly impossible for fetal brains, which would be necessary to fully understand expression changes throughout development. Additionally, researchers are limited by what cis and trans sequences are already annotated across all species, potentially leaving out many potential candidates for genes key to human brain evolution.