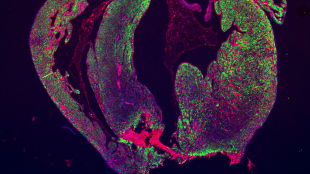 The resected area of a mouse heart is still missing and scar formation (red) is seen in the border of the resection line.STEM CELL REPORTS, ANDERSEN ET AL.In 2011, researchers reported having successfully induced the hearts of newborn mice to regenerate after a surgery. The feat was a major accomplishment in demonstrating the ability of a mammalian heart to regenerate, and the publication has been cited more than 300 times. But in a study published today (April 3) in Stem Cell Reports, a separate team tested the protocol and could not reproduce the findings.

“I haven’t seen one heart that has been regenerated in our lab,” said Ditte Andersen, the lead author of the new study and a researcher at the University of Southern Denmark. Andersen told The Scientist that she doesn’t have an explanation for the discrepancy. “We’ve discussed everything,” she said, but her team...

Hesham Sadek, the senior author of the 2011 paper and a researcher at the University of Texas Southwestern Medical Center in Dallas, read Andersen’s report and said the problem is technical. “I think that their techniques are flawed,” he said, although he would not provide further detail.

Sadek’s procedure involved cutting out about 15 percent of the heart at the left ventricular apex in one-day-old mice. Over time, the researchers observed, the heart grew back. And within 21 days, it was completely restored to normal size and function. The method offered a new—and, importantly, mammalian—model for cardiac regeneration; previously, only zebrafish and salamanders were known to mend a damaged heart. Andersen said the work was “groundbreaking,” and that she and her colleagues wanted to develop the model for themselves.

Andersen’s group followed the surgical protocol, but did not get the same results. Her first thought was, “we had done something wrong,” Andersen said. “But soon it became clear to me that all our hearts at day 21 . . . we found only fibrotic scars.”

Bernhard Haubner, working in the lab of Josef Penninger at the Institute of Molecular Biotechnology in Vienna, Austria, also had difficulty replicating the regeneration Sadek’s team reported after heart resection. “We tried initially, but couldn’t get it standardized,” Haubner told The Scientist. He said that the animals’ post-procedure survival rate was poor, so he moved on to develop a different method of inducing regeneration by modeling heart attack in one-day-old mice. “The problem might be just technical,” Penninger told The Scientist, “but we didn’t follow up” to confirm that.

Other groups, however, have had success with the technique. “We’ve been able to repeat it,” said James Martin, a regeneration researcher at the Baylor College of Medicine in Houston, who traveled to Dallas to learn the technique first-hand. Mauro Giacca, the director of the Trieste Component of the International Centre for Genetic Engineering and Biotechnology (ICGEB) in Italy, also had success in his lab. “As soon as the . . . paper came out, we tried to repeat it here because we’re interested in cardiomycyte regeneration, and it worked,” he told The Scientist.

“To have different labs get different results doesn’t surprise me,” said Harvard Medical School's Richard Lee, who has also had success using the apex resection model to regenerate mouse heart tissue. “There are so many things that can affect regeneration and healing,” he said, “and we’re talking about a model where things may be on the cusp of those two.”

Andersen said she’d like to find out what might explain the discrepancy between her results and others’ because it might be biologically informative. “If we could identify something that is actually a difference, then we may identify a really important factor for cardiac regeneration,” she said.

Sadek said his group has not focused as much on the apex resection model to induce regeneration as it has on a new method that, like Penninger’s, is based on myocardial infarction (MI). “We have trained over 20 labs since the [2011] Science paper came out. We’ve trained labs from the U.S., from Europe, and from Asia. And we know that most of these labs now, like we do, use the MI model, not the resection model,” he said. The MI model is more physiologically relevant and easier to perform than the apex resection approach, he said.

Sadek said he’d be willing to host a member of Andersen’s group in his lab to learn the technique, and she also said she'd be interested. To work out the details of this method is important, Sadek said. “I think, in the long run, it will be in the best interest of science.”

Update (July 9): Hashem Sadek and colleagues responded this week (July 8) in a letter to the editor in Stem Cell Reports that seven labs have been able to replicate the technique. “Although it is difficult to draw clear conclusions about such differences without a detailed analysis of primary data, our impression is that variations in surgical technique, amount of resected myocardium, methods of quantification of resected and regenerated myocardium, and methods of assessment of myocyte proliferation form the basis of the differences seen,” the authors wrote. They added that they would be willing to work with Andersen on the technical aspects.

In an accompanying response letter, Andersen and her colleagues said they took great care in their surgical techniques. “We would very much like to examine and discuss these issues in a collaborative manner with the Sadek group. We look forward to seeing the apex resection results from other ongoing studies, so that we may pursue approaches that could release the heart from its inert state of repair.”