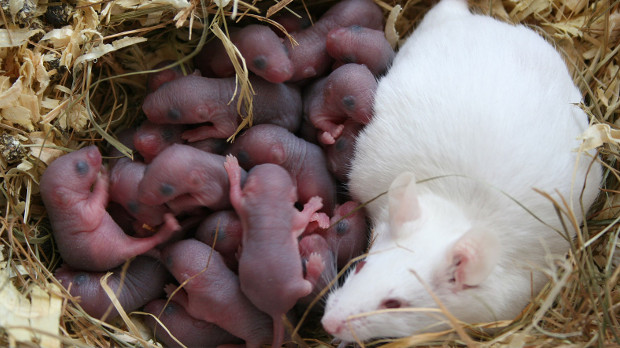 WIKIMEDIA, SEWERYN OLKOWICZImmunoglobulin G (IgG) antibodies in breast milk prevent immune responses against the essential microbes that colonize the newborn mouse gut, according to researchers at the University of California (UC), Berkeley, and their colleagues. The team’s findings, published in Cell today (May 3), are somewhat surprising to immunologists who previously considered IgG a purely pathogen-fighting molecule.

“They found . . . that IgG acquired from the mother is important for regulating immune responses in the pup,” said immunologist Noah Palm of Yale University who was not involved in the study. “IgG was thought to be mostly involved in protecting against [pathogenic] infection,” he added, “but, in this case, it is actually shaping the response to the commensal microbiota.”

The benevolent bacteria of a mammal’s gut assist with digestion and immune function, among other things, so establishing colonies of these bugs after birth is essential for intestinal and general...

“We know that neonates will inherit their microbiota from their mother,” said study coauthor Meghan Koch of UC Berkeley, referring to the fact that newborns collect an array of microbes as they travel through the birth canal. “And we thought that maybe the mother could also provide some sort of instruction on how to deal with this microbiota and how to appropriately respond to these new commensal antigens,” she added.

Cytokines and other components of mother’s milk are known to help her newborn tolerate gut bacteria and prevent the bugs from migrating into the surrounding body tissues. But Koch and her colleagues wondered if resident microbe-specific antibodies—either in breast milk or via the placenta—might also prime the infant intestine.

It’s known that maternal antibodies help prevent infections in newborns. To see if they might also help resident microbes to colonize, Koch and her colleagues examined mouse pups who, because of a genetic deletion in the mother, lacked maternally-derived antibodies. These pups, the team found, exhibited excessive T-cell activation in the gut’s lymphatic tissues, indicative of a reaction against foreign bugs. The mother’s antibodies therefore appeared to be necessary to suppress immune responses to the microbiota.

The primary antibody isotype in breast milk, IgA, had previously been proposed to regulate host-resident microbe interations, Koch noted. But she and her colleagues found that mouse pups who specifically lacked maternal IgA—but not other maternal antibodies—“didn’t really display any phenotype,” Koch said. “We were really surprised.”

Going back to the drawing board, Koch’s team examined which antibodies in normal adult mice might recognize resident bacteria. The researchers mixed blood serum, which contains antibodies, with feces from the same animal, and then observed which antibodies were bound to bacteria using isotype-specific probes. Although IgA clearly bound to a number of bacteria, so too did IgG.

Further experiments revealed that IgG associated with a far broader range of resident bacteria than did IgA. “That goes against dogma,” said study coauthor Greg Barton of UC Berkeley. “It’s going to change the way that people think about the different isotypes functioning in [commensal tolerance],” he said.

IgG can be passed from mother to infant in utero and via breast milk, but the team discovered that breast milk was the important route for establishing microbiota tolerance. If pups born with a normal antibody repertoire were breastfed by mothers lacking antibodies, the pups’ intestinal T cells became overactive. If, on the other hand, pups lacking maternal antibodies were breastfed by wild-type mothers, the pups’ intestinal T cells were kept in check. Further, the team confirmed the presence of maternally derived, resident microbe–specific IgG in the intestines of newborn mice.

Although the researchers saw a clear over activation of gut immune cells in pups lacking the breast milk antibodies, as yet there is no evidence that this affects the offspring’s health long-term. However, “I personally think it is not a good thing to make a bunch of memory T cells against you commensal microbes,” said Barton. “If I had to bet, I guess I would bet that that’s going to have some consequences.”

Indeed, such reactions against resident bacteria are features of inflammatory bowel conditions such as Crohn’s disease and ulcerative colitis.

New moms who are unable to breastfeed their babies should not immediately panic in the face of these results, however. In humans, “there is some [IgG] in colostrum, but there is relatively little maternal IgG that is taken up through the milk compared with mice,” said gastroenterologist and immunologist Andrew Macpherson  of the University Hospital of Bern in Switzerland who was not involved in the study. Instead, human IgG mainly crosses the placenta, he explained. Maternally derived, resident microbe-specific IgGs could thus be important for humans, Macpherson said, but might come via a different route to that in mice. “If we try and extrapolate mouse results into humans, we have to remember that the situation is rather different,” he said.

And if the breastfeeding results do hold true in humans, “the more that we start to define what is happening in these early developmental periods, the better chance we have of being able to essentially supplement and recreate those [immune] effects,” said Barton.

“The level of care that mothers give their children is much more than just whether they breast feed them or not,” Macpherson said, adding: “I was mainly formula fed and I’m still here.”

Clarification (May 6): The third-to-last paragraph of this article has been updated. The line “Maternally derived, resident microbe–specific IgGs could thus be important for humans, Macpherson said, but might come via a different route to that in mice” has been added to provide better context for the quote that follows.