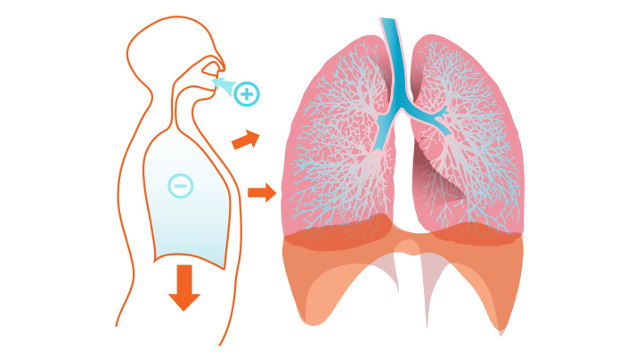 WIKIMEDIA, MARIANA RUIZ VILLARREALIf the human digestive tract were a river from the mouth extending through the stomach and intestines, ending at the anus, the lungs would be pools alongside that river that are often swept by eddying currents, according to Gary Huffnagle from the University of Michigan, who began studying the bacterial communities that inhabit these pool-like organs nearly a decade ago. “There’s a constant flow into [the] lungs of aspirated bacteria from the mouth,” he said. But through the action of cilia and the cough reflex, among other things, there’s also an outward flow of microbes, making the lung microbiome a dynamic community.

Like the placenta, urethra, and other sites of the body now known to harbor commensal bacteria, researchers and clinicians once considered the lung to be sterile in the absence of infection. Over the last 10 years, however, evidence has been building that,...

The surface area of the healthy lung is a dynamic environment. The respiratory organ is constantly bombarded by debris and microbes that make their way from the mouth and nose through the trachea. Ciliated cells on branching bronchioles within the lungs beat rhythmically to move debris and invading microbes, while alveolar macrophages constantly patrol for and destroy unwelcome bugs.

When researchers first began to study the possibility of a lung microbiome, skeptics abounded. As Leopoldo Segal of the New York University Langone Medical Center started presenting his research at conferences in 2009, “it was not uncommon to have someone stand up and say I was looking for life on the moon,” he recalled. The most common criticism of his and other early studies was that, because the microbes found in the lungs were a subset of those from the mouth, they could simply have been the result of contamination. In the time since, several groups have replicated Segal’s findings that a subset of oral bacteria live in healthy lungs and many researchers now accept the idea of a lung-specific microbiome.

The lung microbiome is about 1,000 times less dense than the oral microbiome and about 1 million to 1 billion times sparser than the microbial community of the gut, said Huffnagle. That is in part because the lung lacks the microbe-friendly mucosal lining found in the mouth and gastrointestinal tract, instead harboring  a thin layer of much-less-inviting surfactant to keep the respiratory organs from drying out. In a review article published in The Lancet Respiratory Medicine this March, Huffnagle and his colleagues argued that the lungs are like the South Pacific, with small islands of clustered bacteria and wide stretches of unpopulated regions between them. It appears that the lung microbiome is populated from the oral microbiome, and among this population exists a small subset of bacteria that can survive the unique environment of the lung. The most common bacteria found in healthy lungs are Streptococcus, Prevotella, and Veillonella species.

Recent studies have demonstrated that chronic lung diseases are associated with disturbed lung microbiomes. A 2012 PNAS study led by epidemiologist  John LiPuma of the University of Michigan described results of cultures made from specimens collected over a decade from the lungs of patients with CF. The researchers found that as a patient’s disease progressed, his lung microbiome became less diverse, although overall microbe density stayed the same. They ascribed this shift in the microbiome to the use of antibiotics, which is often necessary for those with CF. “Are antibiotics bad? We’re not saying that at all,” LiPuma said. “The question this paper raises is: ‘Is there a tipping point where antibiotics start to turn against us in CF?’”

Segal, who studies small airway disorders with an eye toward early detection of COPD, has found in a series of studies that inflammation of the lungs is often accompanied by a shift in their bacterial makeup. The mechanism behind these changes and consequences of them are still not well understood, however. Other studies have uncovered associations between changes in the lung microbiome and HIV or asthma, but again, causality has been difficult to elucidate.

Surprisingly, a 2013 study published in the American Journal of Respiratory and Critical Care Medicine by members of the Lung HIV Microbiome Project—a large-scale study funded by the National Heart, Lung and Blood Institute to characterize healthy lung microbiomes and use that information as a baseline to measure changes in the lungs of people infected with HIV—found that the microbiomes of disease-free smokers were not significantly different than those of healthy non-smokers. So far, there have been few studies of how infectious diseases such as pneumonia, influenza, or tuberculosis affect the lung microbiome.

According to Yvonne Huang from the University of California San Francisco Medical Center, who is working to characterize lung microbiomes in relation to health and disease progression, “this field is where studies of gut microbiome were 10 to 15 years ago.”