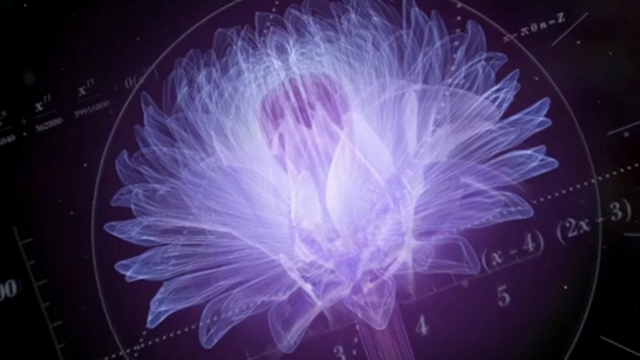 What’s the difference between a 100-story skyscraper towering over a bustling metropolis and a 2-inch flower blooming in the countryside? To architecture-student-turned-artist Macoto Murayama, not a whole lot.

“[The flower] is organic and is rather different from architecture [in that way],” Murayama writes in an email (translated by Rodion Trofimchenko, a curator at the Frantic Gallery in Tokyo, Japan, where Murayama shows his work). “[But] when I looked closer into a plant that I thought was organic, I found in its form and inner structure, hidden mechanical and inorganic elements.”

Intrigued, Murayama began applying the computer graphics programs and techniques he had learned while studying architecture at Miyagi University of Education in Sendai to illustrate, in meticulous detail, the anatomy of flowers. After choosing a flower, purchased at the flower shop or picked up on... A flower in the process of being disected by Murayama.
Macoto Murayama COURTESY OF FRANTIC GALLERY

“His images are very beautiful,” says Linda Ann Vorobik, a professional botanical illustrator affiliated with the Herbarium at University of California, Berkeley, and University of Washington, Seattle. “He’s trying to present a scientific illustration style to show the various details, but then he’s spinning it with a lot of techniques that are dependent upon high-tech tools to create images that are pleasing to the eye.”

Curator Trofimchenko first saw Murayama’s work at the Art Award Tokyo Marunouchi Exhibition in 2009. “It was, of course, not as strong as [his] recent works, but anyway outstanding: contemporary media, explicit union of tradition and experiment, and obvious root of that image in personal interest (obsession) of its author,” Trofimchenko writes in an email. Impressed, he and Frantic Gallery director Yasunobu Miyazaki approached Murayama at the opening reception and asked if he’d be interested in showing his art in the gallery.

Murayama completed his BA in spatial design at Miyagi University and a post-graduate degree in media expression at the Institute of Advanced Media Arts and Sciences (IAMAS). In addition to working on his art, he holds a part time job at a flower shop, running deliveries and assisting with production, design, and photography.

“The reason I am working at the flower shop is that I cannot support myself only with my art works, which is a negative side, but I can also see how people who deal with flowers and plants, think about them, how they perceive them, which is a positive side,” Murayama says. “I am sure that in the future this experience will come to live in my thinking and my works.”

Murayama says his current illustrations are purely an “artistic expression,” but he could see turning to more scientific endeavors down the road. Vorobik isn’t sure if his style will be easily accepted by the scientific community, however. “The reality in publication is that the bottom line matters,” she says. “For so many years, line drawings have been the cheapest way to illustrate stuff. It’s a matter of efficient cost.”