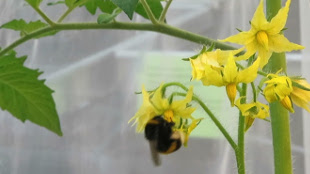 A bumblebee buzz pollinates a tomato flower.ALEX M. MURPHY, SANJIE JIANG AND JOHN P. CARR Tomato plants infected with cucumber mosaic virus seem to be more attractive to their bumblebee pollinators than uninfected plants, according to scientists at the University of Cambridge, U.K., and their collaborators elsewhere. Mosaic virus infection is also associated with changes in the volatile compounds that that tomatoes emit, the researchers found, and the researchers suspect that these volatile compounds attract bumblebees to infected plants. Whereas in the absence of bumblebee pollination, mosaic virus–infected plants produced fruit with fewer seeds than uninfected plants, with bumblebee pollination, the infected plants produced as many seeds as their virus-free counterparts, according to a study published today (August 11) in PLOS Pathogens. Attracting pollinators could be the virus’s way of compensating host plants for the diminished seed production it otherwise causes, the study authors proposed.

“I thought it was very unique that perhaps this virus is conferring an advantage onto infected plants. In other words, they are more ‘visible’ to bumblebees, not through their vision, but through long-distance odor attraction, and then that would promote the pollination and seed set in the plant, which is pretty cool,” said Stephen Buchmann, a pollination ecologist at the University of Arizona who was not involved in the work.

A previous study found that cucumber mosaic virus infection leads to changes in the volatile compounds released by squash plants, and that these changes made the infected-plants more attractive to aphids, herbivores that feed on the squash plants and are also vectors for the virus. The researchers were curious about whether mosaic virus, a major tomato pathogen, might have a similar effect on plant-pollinator interactions. To explore this question, the researchers tested whether infection with the virus changes the olfactory cues tomatoes release in a way that might attract or deter bumblebee pollinators.

In the lab, the researchers took both mosaic virus–infected and control tomato plants, covered them by mesh towers so that the bees could not see them but could still detect their odors, and exposed them to bumblebees. Even though the plants were concealed, the bumblebees had incentive to visit the tomatoes as each tower was topped by a tiny dish of a sugar solution. The bumblebees preferentially visited the towers concealing virus-infected plants. This preference, however, disappeared when the virus used was missing a gene, called 2b, which impairs the production of microRNAs and short-interfering RNAs, suggesting that the small RNA pathway was somehow involved in bumblebee attraction.

Mosaic virus infection changed the blend of volatile compounds that the tomatoes produced, the researchers reported.

Bumblebees pollinate tomatoes via “buzz pollination,” in which bumblebees bite down on the tomato flower’s cone of several anthers and vibrate very hard, “turning themselves into, kind of, living bee tuning forks,” Buchmann explained.  The pollen accumulates energy and “comes blasting out,” he said.

Mosaic virus infection is influenced by dominant pathogen-resistance genes, Groen explained: with just one copy of the resistance-producing gene, the plant exhibits the resistance phenotype. Yet some recessive polymorphisms of pathogen-resistance genes, should a host have two copies of them, make the plant susceptible to virus infection. The extra pollination that comes with virus infection could increase the fitness of susceptible plants and help explain why these virus-susceptibility genes persist in tomato populations, the researchers proposed.

A mathematical model the team created serves to support that hypothesis. Since persistence of virus-susceptibility genes would benefit the viral host, the researchers “speculate that enhanced pollinator service for infected individuals in wild plant populations might provide mutual benefits to the virus and its susceptible hosts,” as they wrote in their study.

“The most tantalizing suggestion is that the increased visitation caused by the CMV [cucumber mosaic virus] may serve to offset the costs of viral infection by increasing fitness of infected plants,” Mario Vallejo-Marin, who studies buzz pollination at the University of Stirling, Scotland, and was also not involved in the work, wrote in an email to The Scientist. To test that hypothesis, he added, it will be necessary to “take the science into the field.”