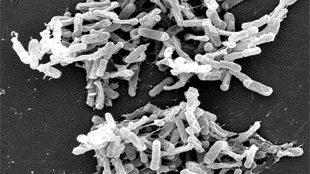 Only 25 percent of hospital-associated Clostridium difficile infections can be traced to contact with a symptomatic patient in one particular hospital system, according to new research. Surveying  recent diarrhea cases in one county in England, the study, published in PLoS Medicine today (February 7), throws the effectiveness of costly prevention strategies typically employed by hospitals into doubt.

The study is “ambitious and far-reaching in its conclusions,” said Kent Sepkowitz, a clinical epidemiologist at Sloan Kettering Memorial Hospital in New York who was not involved in the research. “It shakes the foundation of what we understood” about hospital-associated C. diff infections.

C. difficile is a spore-forming bacterial species associated with severe, sometimes fatal, diarrhea. It’s unclear how many healthy, asymptomatic adults carry C. diff in their colons, but in times of ill health, and especially after broad-spectrum antibiotic treatment, it can...

In the United Kingdom, where C. diff reporting has been mandatory since 2007, its prevalence is an indicator of hospital quality, and hospitals with high rates of C. diff are fined, said study co-author Tim Peto of the University of Oxford. The study results suggest that preventive steps, like hand washing and isolation of infected patients, may only address about a quarter of C. diff infections in some hospitals.

In order to trace the connections between infected hospital patients, the researchers focused on Oxfordshire, a county with a population of about 600,000 in the UK, where almost all health care is provided by one hospital system, which relies on one lab to run diagnostic tests for C. difficile.  Over the course of two and half years, samples from all patients with diarrhea, and most patients over 65, were sent to this central facility. Hospitals as well as general practitioners sent samples. The researchers also had access to data on patient locations and movements. Stool samples were screened for C. diff toxins, positive samples were cultured, and the isolates genotyped based on several loci.

Genotyping allowed Peto and his colleagues to trace the path of specific strains, and the hospital ward data gave insight into possible instances of contact between patients. Although rates of infection varied by specialty (oncology vs. general surgery, for example), only a quarter of cases could be traced back to a known infected patient.

Peto said he suspects that instead of encountering C. diff upon entering the hospital, most patients who fell ill carried it in with them. Then, poor health and antibiotic treatment combined to encourage C. diff to overrun the intestines and cause disease. “You blame the hospital,” Peto explained, “but that’s were you go when you’re ill.”

It’s the inability to ascertain the relative impact of asymptomatic carriers that worries Louis Valiquette, an epidemiologist at Université de Sherbrooke in Quebec who did not participate in the study. In healthy adults, only about 3-5 percent will have C. diff in their stool, Valiquette explained, but that rate jumps to more than 40 percent in people who have contact with hospital environments. Though he agreed that the study’s scope and felt the results were impressive, Valiquette said that the data is limited by the standard of preventive practices used in the surveyed hospitals. It’s unclear, Valiquette said, whether the results could be replicated in hospitals with different practices.

Even if only 25 percent of C. diff infections are acquired inside the hospital, it’s a worrisome rate, and doesn’t argue against stringent control measures, added Valiquette.

In contrast, Sepkowitz sees in the results a recommendation for restraint. Most C. diff cases are associated with antibiotic treatment, meaning that regardless of the route of acquisition, disease might be avoided with more judicious use of the drugs.

Much about C. diff infection and epidemiology is unknown, said Peto. The hypervirulent strain, O27, which was most prevalent at the study’s inception, almost never pops up anymore, Peto said. Whether C. diff mutated away from virulence, or new, less-virulent strains replaced O27, is unclear. Whole genome sequencing will also help researchers hoping to identify virulence-conferring mutations. Sepkowitz hopes that future research brings a deeper understanding of C. diff biology, its incubation time and the “magic moment” when spores become viable.