Towards the final stages of diseases such as cancer and kidney disease, many patients develop cachexia, a devastating condition in which muscle mass and fat reserves waste away, leading to uncontrollable weight loss and sometimes death. Cachexia can also surface during infections, for instance, by HIV, tuberculosis, malaria, and other parasites. The condition can’t be cured by getting patients to eat or by giving them nutritional supplementation, pushing scientists to better understand its underlying causes.

Now, researchers have identified a mechanism by which viral infection can lead to cachexia. In mice infected by a particular virus, killer T cells trigger the wasting of fat tissue and body weight, although how they do so is still unclear. The findings were published on Monday (May 20) in Nature Immunology.

“Currently, we don’t have a therapy in cachexia,” notes Denis Guttridge, a cancer biologist at the Medical University of South Carolina who wasn’t involved in the new research. “This is a study that opens up the possibility of a new therapeutic target that we should consider.”

To understand how infection can drive cachexia, the researchers turned to a well-established model of viral infection: mice infected with lymphocytic choriomeningitis virus (LCMV), a rodent-borne pathogen that can also infect humans. Within a week of being exposed, the animals mirrored symptoms of cachectic human patients, the researchers observed: they moved less, lost up to 20 percent of their body weight, and parts of muscle and fat tissue melted away.

Like human cachexia patients, the rodents eat and drink less even though they have access to food. Importantly, the infected mice don’t re-gain the weight when force-fed. In the latest study, the team gave the mice glucose, olive oil, and protein, to no avail. This is in line with human cachectic patients, explains Hatoon Baazim, a doctoral student in immunologist Andreas Bergthaler’s lab at the Austrian Academy of Sciences who led the experimental work. And it stands in contrast to the eating disorder anorexia, in which people also restrict calories and commonly lose weight to dangerous degrees. “With anorexia, if you supplement with nutritional support, you can [treat] it, but with cachexia you can’t.”

They are describing a whole new pathway of weight loss that hasn’t been explored before.

The team did a number of experiments to understand what could be driving the cachexia in their model. They first blocked some “usual suspect” proteins that are known to trigger cachexia in mouse cancer models, such as interleukin-6 and TNFalpha. But surprisingly, this had no improvement on the animals’ tissue wasting, suggesting that a different mechanism was at play.

So they decided to investigate whether T cells might be playing a role, because they’re known to drive the pathologies associated with LCMV infection in mice. To the scientists’ surprise, they found they could prevent the animals from losing weight when they injected antibodies that result in the destruction of killer T cells a few days prior to LCMV infection: mice with depleted killer T cells showed little to no weight loss compared to uninfected, healthy animals. “That was one of the most surprising aspects,” because killer T cells—also known as CD8+ T cells—haven’t been implicated in cachexia so far, recalls Baazim.

Additional experiments showed that the T cells need to be activated by the LCMV virus in order to trigger cachexia, as well as by particular antiviral cytokines. However, what the T cells are actually doing to drive cachexia is still unclear. Bergthaler says he thinks the cells might be releasing a soluble factor that instructs fat tissue to initiate fat-burning processes, or they relay that information via another type of cell first. “It’s one of the big questions that we’re left with,” he says. “We know that T cells are doing it, but we don’t know how they’re doing it.”

For the moment, the role of T cells in driving cachexia appears to be limited to LCMV infection. When the team repeated some of its experiments with the influenza virus, the researchers found that T cells don’t appear to be triggering cachexia. Bergthaler’s team is currently exploring whether the mechanism holds up in other viral infections, he says.

“This [mechanism] may turn out to be something unique for this particular virus,” Guttridge notes, but it’s possible that it plays a role in other settings of cachexia, and researchers simply haven’t come across it yet.

Studies in cancer-associated cachexia have largely focused on cytokines such as interleukin-1, interleukin-6, and TNFalpha, notes Ezequiel Dantas, a postdoc in endocrinologist Marcus Goncalves’s lab at Weill Cornell Medical College. However, clinical interventions that have focused on blocking those proteins have yet to show success—“that means that we’re not getting the whole picture,” Dantas says. To him, the new research suggests that cachexia may be occurring via other mechanisms that researchers weren’t aware of. “They are describing a whole new pathway of weight loss that hasn’t been explored before,” adds Dantas, who wasn’t involved in the study.

It’s important to see if these findings translate to human patients, adds Goncalves, which would be possible by examining blood samples of cachectic patients. Now that the new findings are published, “many groups are going to be eager to do that,” he says.

“I thought they had some pretty exciting findings, especially with regard to depleting the CD8+ cells,” Goncalves says of the study. In particular, he lauds the effort Bergthaler’s team put into validating that the mouse model resembled cachexia in human patients. He hopes the group will investigate the precise mechanisms by which T cells influence different aspects of cachexia, particularly the feeding behavior of the mice. “A lot of this [cachectic] mode is being driven by a reduction of food intake, and how the CD8+ cell leads to a reduction of food intake is a big question mark that’ll be interesting to look forward to in the future.”

Guttridge adds that he’d like to see more work on how the T cells could lead to muscle loss, which is the main factor associated with poor survival outcomes in cachectic cancer patients. “This particular study focused a lot on how lipolysis occurs, but didn’t really give us an insight on whether the same mechanism is relevant to muscle loss.”

For Bergthaler and Baazim, the results underscore how such diverse processes can manifest in a single condition such as cachexia, begging the question of why cachexia occurs to begin with: Is it just unfortunate collateral damage of infection and disease, or does it offer some physiological benefit?

In the context of infection, cachexia may not be all bad, Bergthaler suggests: It could be a way of rapidly releasing the energy stored in fat tissue to help the immune system fight the infection. These are speculations, he stresses, but nevertheless important considerations to be made, especially in the context of developing ways to treat cachexia. “We think this is an interesting case where, on the whole organism level, you see how the immune system is communicating with the metabolism, and there’s probably feedback into the immune system again. We’re trying to figure out what the physiological, evolutionary explanation for that may be.” 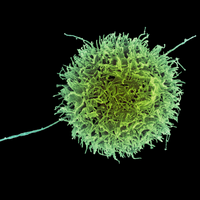