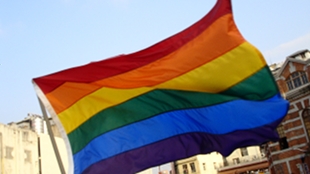 WIKIMEDIA, theodoranian.Researchers looking for a genetic signature of homosexuality have been barking up the wrong tree, according to a trio of researchers in the United States and Sweden. Instead, the scientists posit, epigenetic influences acting on androgen signaling in the brain may underlie sexual orientation. In a paper published last week (December 11) in The Quarterly Review of Biology, they propose a model describing how epigenetic markers that steer sexual development in males could promote homosexual orientation in females, and vice versa. The scientists offer their model to explain both the tendency of homosexuality to run in families, and the fact that so far no “homosexual gene” has been identified.

“It’s a very provocative, very interesting new twist that is plausible,” said Margaret McCarthy, a neuroscientist at the University of Maryland who studies how hormones influence brain development and was not involved in producing the model. But,...

Indeed, Andrea Ciani, an evolutionary psychologist at the University of Padova, thinks that a variety of factors, including genes and epigenetics, influence sexual orientation. “It’s a little bit vain to think we’ll find the answer to homosexuality as a whole.”

First, evidence shows that homosexuality can run in families. Still, only 20 percent of identical twins are both gay, said Rice. Furthermore, linkage studies looking for a genetic underpinning to sexual orientation have not turned up any “major” homosexual genes, Rice noted. “This made us suspicious that something besides genes produces heritability that isn’t genetic.” Epigenetics fits the bill.

The model focuses on the role of epigenetics in shaping how cells respond to androgen signaling, an important determinant of gonad development. The researchers suggest that androgens are also important factors in molding sexual orientation, and that various genes involved in mediating androgen signaling are regulated by epigenetic modifications.  These epigenetic marks, they argue, can be passed on between generations.

As an example of how androgens shape sexuality, the researchers point to girls with congenital adrenal hyperplasia (CAH), who produce very high levels of testosterone and often display masculinized genitalia and higher rates of same-sex attraction. But testosterone levels are sometimes the same in normally developing male and female fetuses—without masculinizing the females—suggesting that something else must be playing a role.

The answer, they hypothesized, has to do with sensitivity to androgens. There are a variety of proteins that can modify androgen signaling, and the researchers hypothesize that differences in sensitivity to these signals between male and female fetuses help mediate their sexual differentiation. Rice and his colleagues suggest that such sensitivity may be regulated by the acquisition of epigenetic marks that make girls less sensitive to masculinizing androgens, or make boys more sensitive.

Such epi-marks are typically accrued early in development, as cells are programmed to become specific adult cell types. But, the researchers speculate, perhaps they could be inherited from a parent. Most epigenetic modifications are erased during development of germ cells and soon after fertilization so that cell lineages can be programmed with new epigenetic modifications. But if epi-marks that direct sexual development are not erased correctly, a mother could pass down epi-marks that direct female development to her son, resulting in an attraction to men, and vice versa for a father and his daughters, the researchers theorize.

They also expect that specific epi-marks will regulate sensitivity differently in the brain versus gonads, resulting in same-sex attraction even when normal genital development occurs, said Gavrilets.

Eric Vilain, a neuroscientist at the University of California, Los Angeles, worries that the model, which “might be true,” makes a few simplistic generalizations. “It assumes the same mechanism [for development of sexual orientation] in both sexes . . . and that androgen levels play an important role in the development of sexual orientation”—neither of which has been demonstrated, he said.

Though girls with CAH do show higher rates of homosexual orientation, their exposure to testosterone “is so high it actually masculinizes their genitalia,” said Vilain, who researches mammalian sexual development. “It remains to be seen whether smaller variants of testosterone that do not result [in masculinized genitalia] also lead to attraction of same sex partners.”

In addition, the model’s predictions may be difficult to examine. Determining whether epi-marks have not been erased will be difficult to test, said Vilain, because the marks relevant to sexual orientation will probably be in the brain.  But Rice proposes that because homosexuality can run in families, surveying the epigenomes of sperm from men with or without lesbian daughters could reveal key differences.

Fascinating as it may be to understand the biological basis of sexual orientation, however, not everyone is convinced it’s a necessary line of investigation. “Should we test this? Is it important for us to know?” asked McCarthy. “Homosexuality is not a disease, it’s part of natural human variation. I’m not sure there’s a good reason to delve this deeply into it. I think we’ve reached the point that we have enough evidence that there’s a biological basis for sexual orientation.” It would be more helpful to people to get a better handle on the epigenetics of cancer or mental illness, she added.