Marcus is a science and health journalist based in New York City. He graduated from the Science Health and Environmental Reporting Program at New York University in 2019, and earned... 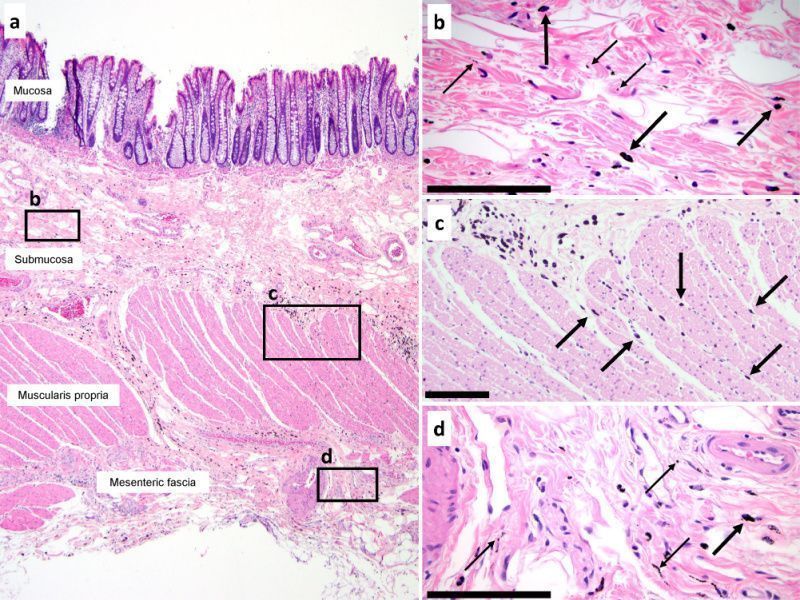 Figure 2 from the new study illustrates the presence of tattoo ink in various layers of colon tissue and the mesentery taken from a colon cancer patient. B, C, and D panels are zoom-ins of the corresponding boxes in A. The thick arrows point to ink within macrophages, and the thin arrows indicate ink within interstitial spaces.
O. Cenaj et al., “Evidence for continuity of interstitial spaces across tissue and organ boundaries in humans,” Commun Biol, 4:436, 2021.

The human body houses a continuous network of fluid-filled compartments between cells that spans organs and is perhaps involved in disease spread, according to research published on March 31 in Communications Biology.

In 2018, the same research team demonstrated the existence of these fluid-filled spaces, which they dubbed the interstitium, challenging conventional wisdom that the space between cells is dense connective tissue. The use of fixed tissues under microscopes had inspired this error, as the fixation process drains the samples of fluids.

While that first paper was provocative—some anatomists pushed back against the authors framing their discovery as a new organ—it did not settle the question of whether the interstitium remains within the cells of discrete organs or crosses between different organs. The authors now say the latter is true, and that the interstitium could act as a conduit for cancers and other diseases to travel throughout the body, in addition to the established pathways of the vascular and lymphatic systems.

To examine the interstitium’s connectivity, Neil Theise, a liver pathologist at New York University Grossman School of Medicine, and colleagues injected tattoo ink into three human skin samples and five colon biopsies from colon cancer patients. In every case, the pigment traveled through many layers of skin or colon tissue. The same thing happened with colloidal silver injected into the skin samples.

In addition, the tattoo pigment or silver particles crossed a traditional organ boundary. The particles moved from the skin into the subcutis, which connects the skin’s dermis to skeletal muscle, and from the colon into the mesentery, which tethers the gut to the abdomen.

“With the hyaluronic acid staining we could show that the spaces were not empty,” Theise says.

The team also saw evidence that various tumor types had traveled along the interstitium to different tissue layers in the samples from people with cancer. This may help to explain why cancers that start in one spot end up somewhere far away despite having no clear path to do so, but more work is needed to verify if this is true, Theise says.

“This paper is going to be cited for a long time,” says James Williams, an anatomy professor at Rush University in Chicago. Back in 2018, Williams was among the skeptics who argued that the interstitium, while important, was not a new organ. (The latest paper does not repeat that claim, and Theise calls the debate “distracting.”) This time around Williams takes no issue with the paper and encourages the authors to pursue research on this potential new pathway for cancer spread.

“It’s making a rather bold, but I’d say substantiated, proposal that this interstitial network may play a larger role in distributing things throughout the body,” says David Tuveson, a cancer researcher at Cold Spring Harbor Laboratory and the current president of the American Association for Cancer Research. One possibility is that medication could travel via interstitial routes, and Tuveson suggests exploring the role of fluid flow in the interstitium in drug distribution throughout the body.

Another idea Tuveson proposes would be to explore the mechanisms by which interstitial fluid merges into the lymphatic system, possibly seeding the metastases that lead to cancer. Theise next plans to study which proteins might be responsible for spreading cancers through the interstitium.