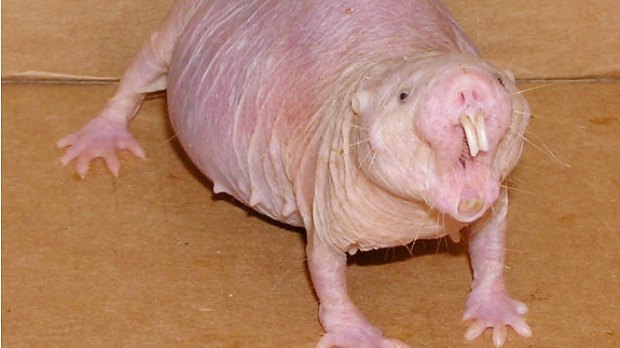 WIKIMEDIA, JEDIMENTAT44The naked mole rat, Heterocephalus glaber, is a wrinkly rodent renowned for its ability to stave off cancer. Although the animals can live for 30 years, there have been no documented cases of malignancies in naked mole rats—until, that is, last week (February 4).

Researchers from the University of Washington and their colleagues reported in Veterinary Pathology that two males, aged 20 and 22 years, had cancerous tumors. “Although these case reports do not alter the longstanding observation of cancer resistance, they do raise questions about the scope of cancer resistance and the interpretation of biomedical studies in this model,” the authors wrote in their study.

From the older mole rat, who is still alive at the Brookfield Zoo in Illinois, the team examined a lump from beneath the skin and determined it to be an adenocarcinoma, likely originating from the mammary or salivary gland. The...

“For the adenocarcinoma (Case No. 1), questions still remain regarding its histogenesis as well as its eventual impact on the health and life span of the affected NMR [naked mole rat]. The gastric neuroendocrine carcinoma (Case No. 2) likely contributed to the [naked mole rat’s] inability to maintain body weight, which was a primary reason for euthanasia,” the authors wrote.