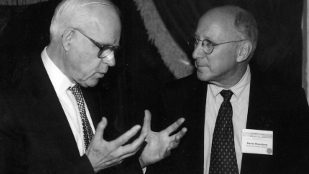 Though the idea of trying to attack cancer by rousing the immune system has gone in and out of favor over the last 50 years, one man’s dedication to the potential of the concept helped fuel the research that is beginning to see success in the clinic. Lloyd Old, who stayed active in the lab even while heading the Ludwig Institute for Cancer Research and the Cancer Research Institute (CRI), died on Monday from prostate cancer at the age of 78.

Lloyd Old started his career as a violinist, playing as an undergraduate in a string quartet at the University of California, Berkeley. While continuing to perform, he began studying biology, graduated in only three years, and after completing medical school, studied tumor...

At Sloan Kettering he began collaborating with Baruj Benacerraf, who won the 1980 Nobel Prize in Physiology and Medicine for his work in immunology. Their collaboration led to the discovery that the tuberculosis vaccine Bacille Calmette-Guérin (BCG) had anti-tumor effects. The pair published those results in 1959, and the approach matured into a cancer treatment in the 1990s. With another collaborator, Edward Boyse, Old then discovered the first immune-cell differentiation antigens, surface markers that opened the door to identifying different types of immune cells via these antigens. “All of that different antigenic complexity goes back to that early work of Old and Boyse,” said Karolinska Institutet researcher Georg Klein , an early collaborator and friend of Old’s.

Old was possibly best known for his discovery of tumor necrosis factor (TNF), a chemical produced by the immune system which can cause cancer cells to necrose, or die almost instantly. These studies and a growing understanding of immunology in the early years of tumor immunology galvanized Old’s belief that the immune system could be the perfect tool to combat cancer.

Because the immune system can kill an invading bacterium or infected cell with such specificity, and because it could adapt its attack, even as its target adapted, Old thought  it could also be recruited to fight cancer—offering the best protection with the least collateral damage.  “Plus T-cells could find tiny masses of tumor throughout the body,” said Allison. “No drugs could do that.” In 1968, Old became involved in CRI, and became its scientific and medical director in 1971, helping shape CRI’s mission to support tumor immunology. That same year Old helped guide the formation of The Ludwig Institute for Cancer Research, a non-profit organization that conducts basic cancer research through branches housed at host-institutions across the globe, and became its director in 1988. “It’s very rare that you find a person that is a good scientist and a good administrator at the same time,” said Klein. Old, he added, was that person.

With early success in animal models, researchers put tumor immunology to the test in the clinic by attempting to stimulate the immune system with antigenic surface markers that were relatively unique to cancer cells.  They would inject the antigen, just as they would a bacterial vaccine, and hope that the immune system would activate strongly enough to seek out and destroy the cancers expressing those antigens.  Many of the early vaccines trials failed in the clinic, however, and a lot of researchers turned away from the idea.

“It has a long history of failure,” Bert Vogelstein, a Johns Hopkins University professor told The Scientist. But “Lloyd didn’t see it as a conceptual failure, but as practical failure—that the right way to harness the immune response hadn’t been figured out yet.” He was “committed to the idea of somehow harnessing the immune response to fight cancer,” added Vogelstein, and “was the person most responsible for keeping this idea alive.”

Recently, cancer immunotherapy has been reinvigorated by two successes in clinical trials. In 2010, the FDA approved Provenge, an immunological treatment for prostate cancer that uses a prostate tumor antigen. It was followed this year by approval of Yervoy, an immunotherapy against malignant melanoma that Allison, at the Sloan Kettering Cancer Center, helped develop. The treatment inhibits an immune-cell antigen called CTLA-4 that puts the brakes on immune responses in general and which is hijacked by cancer cells to evade immune-attack. Though Yervoy has serious side effects, it improved survival time in some patients by several months.

Old was also know to encourage the work of other researchers. “He was always concerned with giving credit to young scientists. He would often hand off an ideas to a young investigator,” said Jill O'Donnell-Tormey, CEO and director of scientific affairs at CRI. Although, “he thought about science 24 hour a day, he was very well rounded,” discussing art, theatre and music as readily as he would science. He had even made a suggestion about which piece of music to play on the institute’s phone answering system. “He picked Italian baroque,” said O'Donnell-Tormey.

Always thoughtful and caring of his colleagues, many described Old as a true gentleman. When Klein heard about Old’s death, he remembers thinking, “It was the first time in his life that Old has done something impolite,” said Klein, who is 86 years old.  “He should have let me die first.”

Old is survived by his beloved sister Constance Old.