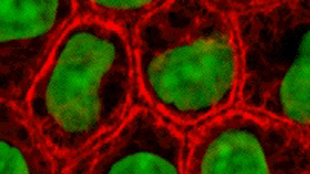 Normal, healthy tissues regularly suppress the growth of tumors, preventing cancerous cells from proliferating and metastasizing. Yet how this process happens on a molecular level has largely remained a mystery. Now researchers have presented one model of how the local environment regulates and prevents the expansion of a single mutant cell into a tumor.

The finding, published this week in Nature, confirms past studies that show cancer is not simply a product of the buildup of DNA mutations in a cell, but rather is dependent on the architecture of a cell’s local environment.

“It’s definitely an interesting phenomena,” says Douglas Brash, who studies skin cancer at Yale University and was not involved in the research. “This paper affirms that cancer is not a cell autonomous process; that the neighborhood really matters.”

Past experiments demonstrated that embryos can suppress tumors. In one classic...

Joan Brugge and Cheuk Leung at Harvard Medical School used a 3D cell culture of human mammary epithelial cells to examine what happens to a single oncogene-expressing cell in a tissue-like environment. The researchers used viral vectors to over-express oncogenes, which had been previously associated with epithelial cancer, one at a time in single cells in the 3D structure. Overexpression of Myc, a master transcription factor, or mutant activated AKT1, which perturbs cell checkpoints, did not result in the proliferation of the cell. “We found that majority of the oncogenes were unable to proliferate as single cells in the context of a normal, growth-arrested structure,” says Brugge.

But cells that overexpressed ERBB2—a cell receptor encoded by a gene that is amplified in 30 percent of breast tumors—moved into the center of the tissue culture, an open space called the lumen. There, freed from its normal neighbors, the single mutant cell began to proliferate.

Through additional experiments, the researchers found that ERBB2 expression affects extracellular matrix proteins, disrupting local cell-matrix attachments and allowing the cell to break free and move into the unrestricted space of the lumen. When the ERBB2 cell’s ability to move to the lumen was blocked, it remained next to neighboring cells and was no longer able to proliferate. They also found that simply by weakening cell-cell connections in the tissue, mutants expressing other oncogenes that were previously benign, including activated AKT1, were able to move into the lumen and proliferate. “The geography of a mutant cell’s neighbors is affecting whether the mutant cell moves to a different part of the tissue,” says Brash.

Next, Brugge plans to investigate how mature neighboring cells prevent single mutated cells from proliferating and if other factors in the environment, such as immune cells, influence the fate of the mutated cell. “We want to understand the nature of the suppressive effect of normal mature structures,” she says.