ABOVE: An illustration of a macrophage (white) engulfing a cancer cell (red)
© ISTOCK.COM, MARCIN KLAPCZYNSKI

The advent of chimeric antigen receptor T cell technology has revolutionized the treatment of blood, or “liquid,” cancers. But solid tumors have largely resisted this type of immunotherapy. To overcome this obstacle, some researchers have started adding CARs to immune cells other than T cells.

On March 18, Carisma Therapeutics, a company founded by researchers at the University of Pennsylvania, announced that it had dosed its first human participant in a landmark Phase 1 clinical study assessing the safety of CAR macrophages. These CARs are modified versions of immune cells that are regularly recruited into tumors and harnessed by cancer cells to evade detection by the body’s immune system. Although macrophages have long been impervious to genetic tinkering, researchers at Carisma discovered a new type of viral vector that allowed them to engineer the cells to retain and bolster their cancer-fighting abilities when injected into solid tumors in mice.

“Originally, I was shocked that somebody would use macrophages to do this kind of CAR therapy,” says Siwen Hu-Lieskovan, a medical oncologist at the University of Utah’s Huntsman Cancer Institute who develops treatments for solid tumors but was not involved in the current research. “But it’s actually a brilliant idea. Tumors actively recruit macrophages, so why don’t we take advantage of that fact and make it something that can help to cure cancer?”

From CAR Ts to CAR macrophages

The first CAR cell treatment, which involved modified T cells that target the CD19 protein expressed on liquid cancer cells, was approved in 2017, and the field has since ballooned. Scientists are now combining CAR T cells with checkpoint inhibitors to increase their longevity and effectiveness, and recent work has focused on applying CAR tools to natural killer cells, which prompt fewer negative side effects such as cytokine release syndrome or neurotoxicity. 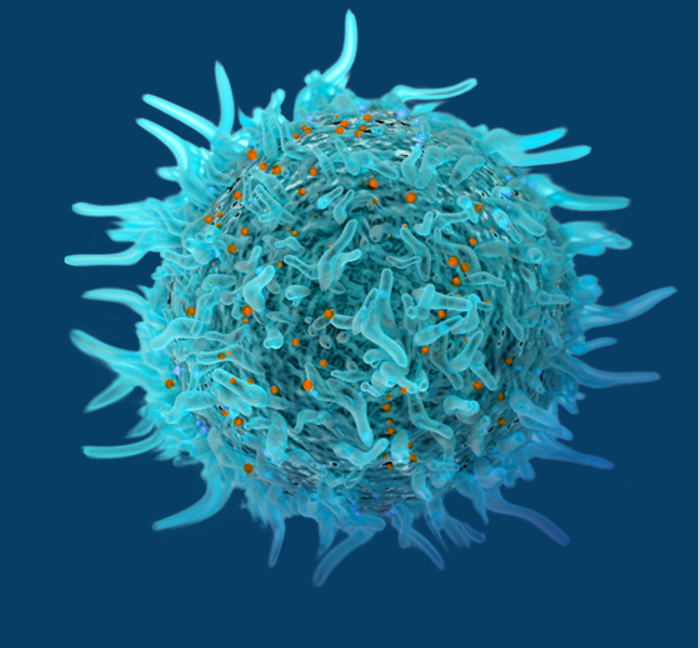 But most therapies that have been successful in treating liquid cancers have failed when applied to solid tumors, says Michael Klichinsky, a codesigner of the first CAR macrophages and cofounder of Carisma Therapeutics, largely because tumors “have evolved to keep T cells out.”

Solid tumors exclude T cells by building a network of blood vessels that make it difficult for T cells to penetrate the tumor, and even if T cells can make the jump inside, “they are immediately attacked by various immunosuppressive factors in the tumor microenvironment,” Klichinsky tells The Scientist. Solid tumor cells also vary in the surface proteins they present, making it difficult to engineer a CAR T cell that can attack each and every cancer cell, even within the same tumor. Moreover, tumors can mutate to produce new variants of whatever protein the CAR T cell is engineered to target.

Macrophages have the potential to overcome these issues, says Klichinsky. He notes that he was first prompted to consider them for CAR based therapies because, unlike T cells, macrophages recognize multiple proteins expressed on the surface of cancer cells, which they flag as foreign. Macrophages then engulf the cells, catalog their proteins, and present T cells with cancer-specific antigens, priming them to also recognize cancerous cells.

Using macrophages as a cancer therapy is not without its own challenges, however. Although tumors do recruit macrophages into the tumor microenvironment, they then reprogram the cells to remain locked in an immunosuppressive state. As a result, rather than recruit other immune cells to the tumor, macrophages become accomplices, promoting tumor growth, enhancing cancer cells’ resistance to treatment, and inducing tumor migration. If they could engineer macrophages to resist this reprogramming, Klichinsky reasoned, it could make them a valuable cancer-fighting tool.

Taking a new CAR for a test drive

Klichinsky helped develop the CAR macrophages currently being trialed by Carisma while completing his PhD in the lab of Saar Gill, a hematologist and oncologist at the University of Pennsylvania Perelman School of Medicine who designed some of the first CAR T cell treatments. Klichinsky recalls struggling for years to identify a viral vector that could smuggle the CAR into macrophages, which are notoriously finicky cells. “The commonly used viral vectors that are employed for CAR T cells simply do not work on human macrophages.”

After screening many possible candidates, Klichinsky identified an adenovirus vector that could be used to engineer macrophages carrying a CAR that bound to the HER2 protein found on the surface of many solid cancers. In addition, Klichinsky also found that introducing the virus into the immune cells made them more likely to remain proinflammatory, a “two-in-one effect” that helps them overcome the tumor’s attempts to convert them to an immunosuppressive state. Remaining active, the macrophages should recognize and engulf cancer cells, then presenting T cells with antigens that are unique to each person’s cancer.

The team published the results of their first experiments using CAR macrophages in Nature Biotechnology in March 2020. In those experiments, Klichinsky and his colleagues tested the performance of the cells in three mouse models. In the first model, mice received cancer cells intravenously that caused them to develop tumors in their lungs, while in the second model the mice developed gastric cancer. The third model involved mice with a humanized immune system, allowing the researchers to probe more closely what the CAR macrophages were doing to the tumor microenvironment at the level of single cells.

In each of the first two models, four animals received a single injection of the CAR macrophages, four received unmanipulated macrophages, and four received saline. In both cases, the treated mice showed a marked reduction in tumor burden over the controls, and while all ultimately saw their cancer progress, treated mice survived for up to several weeks longer. The CAR macrophages were still active and detectable in the mice up to 62 days after transfection.

The macrophages’ proinflammatory state also made the tumor microenvironment more hospitable to other immune cells such as T cells. Once in the tumor, T cells could read the surface antigens on the macrophages and target cancer cells for destruction. As a result, mice that received an injection of CAR macrophages had both stronger antitumoral activity and an extended response compared with control mice, consistent with results from the first two models.

“This is all really exciting,” says Justin Darrah, a hematologist and director of the CAR T cell therapy program at Cedars-Sinai Cancer Center who was not involved in the research. “One of the major advantages of these CAR macrophages is that they’re able to create a proinflammatory environment within the tumor.” Taken together, Darrah adds, the results of the study “demonstrate to me that these have a good chance of being successful when they’re extrapolated into humans.”

Since the publication of their first paper, Klichinsky and his colleagues have tested the efficacy of their CAR macrophages in other mouse models, including one with an intact immune system. While the data remains unpublished, “we’re seeing some really exciting results there,” Klichinsky says.

For example, he describes one mouse experiment in which his team got results suggesting that exposure to CAR macrophages may lead to what he calls “therapeutic vaccination.” That is, when mice harboring a HER2-postive tumor that had been treated with macrophages were exposed to a HER2-negative version of their cancer several months later, they were “completely protected from tumor recurrence because the macrophages had instilled long-lasting memory against the cancer,” Klichinsky says.

It’s actually a brilliant idea. Tumors actively recruit macrophages, so why don’t we take advantage of that fact and make it something that can help to cure cancer?

These and other results ultimately led to the approval the group’s newly launched clinical trial—the first test of CAR macrophages in humans. So far, only one person has been dosed out of a total of 18 participants that the team is recruiting to two sites, one in Pennsylvania and the other in North Carolina. The list of qualifying cancers is broad, as there is “a huge variety” of tumor types that express HER2, says Debora Barton, an oncologist and the chief medical officer of Carisma Therapeutics who is overseeing the trial. “We’re going to look first and foremost at safety of course, but we’ll also be looking in an exploratory way at efficacy, scanning the patients and looking for tumor responses.”

While the HER2 protein has been the most successful target thus far, the company is also beginning to study two other candidates—mesothelin and prostate-specific membrane antigen—to widen the number of cancers that could potentially be treated using CAR macrophages.

“I’m an oncologist, and I have been working for many years trying to find new solutions for cancer patients. This is really special,” Barton tells The Scientist. “We may be turning the corner and looking at something that can make a meaningful change for cancer patients.”