ABOVE: An artistic reconstruction of a theropod making the tracks studied Pablo Navarro-Lorbés

When Usain Bolt set the world record for the 100-meter dash, his speed topped out at about 44.25 kilometers per hour. Some of Tyrannosaurus rex’s formidable cousins that lived on the Iberian Peninsula 120 million years ago could sprint just as fast, finds an analysis of fossil footprints published Thursday (December 9) in Scientific Reports. The findings build on similar analyses of footprints from North America.

“The image that we have of dinosaurs 30 years ago or so is changing,” lead author Pablo Navarro-Lorbés of the University of La Rioja in Spain tells The Wall Street Journal. “In the past we thought that they were lumbering animals not well adapted to the environment. Now we see that some are perfectly adapted to hunting and running.” 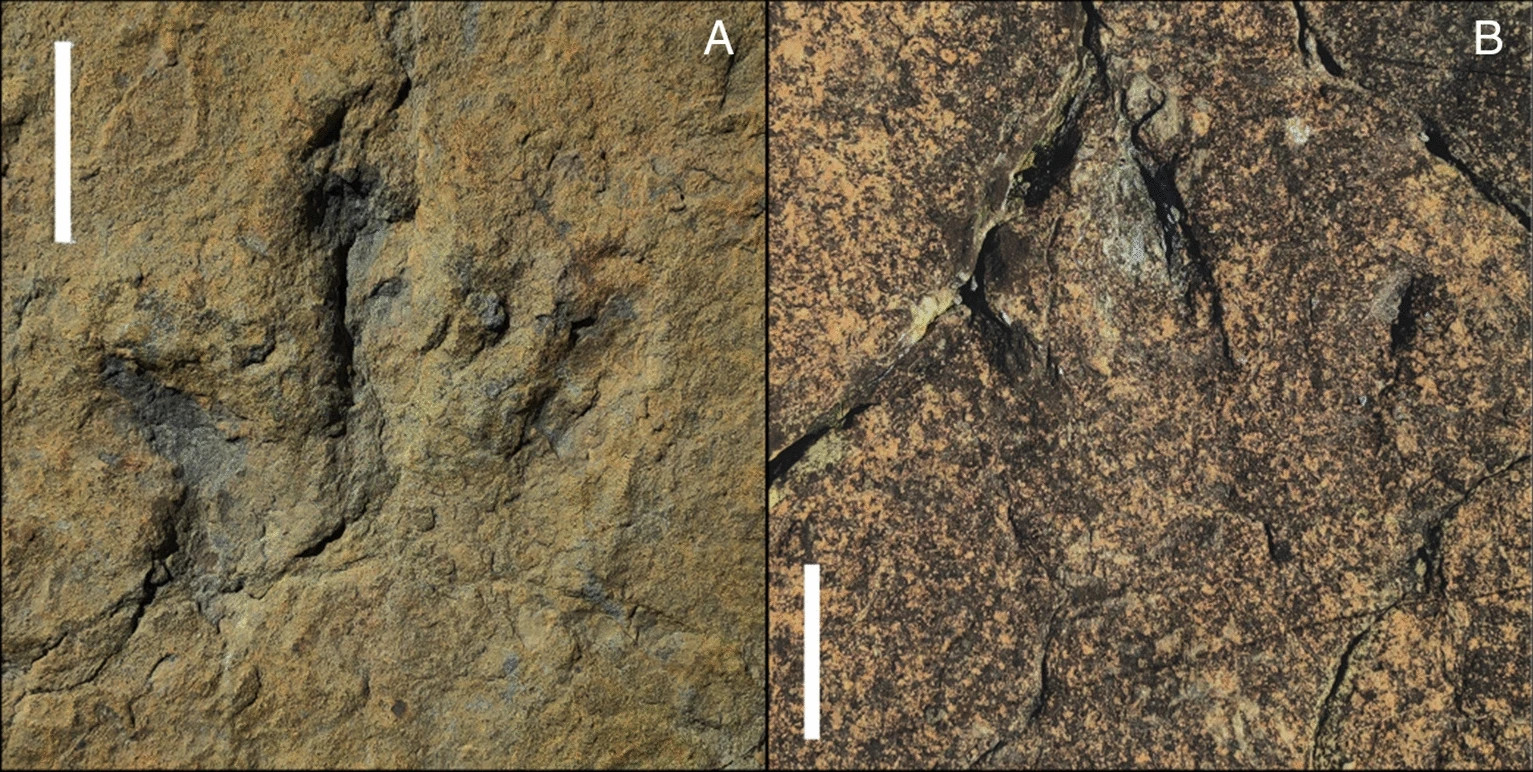 According to the paper, the tracks—one 5 footprints long, and the other 7—were laid during the early Cretaceous period (145 million–100 million years ago) by two individuals of an unidentified therapod dinosaur, a group of that included Velociraptor and T. rex and gave rise to today’s birds. Each footprint consists of an impression of a roughly 30-centimeter foot with three clawed toes. From the size and shape of the footprints, the researchers estimate that the animals stood more than 2 meters tall, measured 4 to 5 meters long, and weighed between 200 and 300 kilograms, according to Reuters. 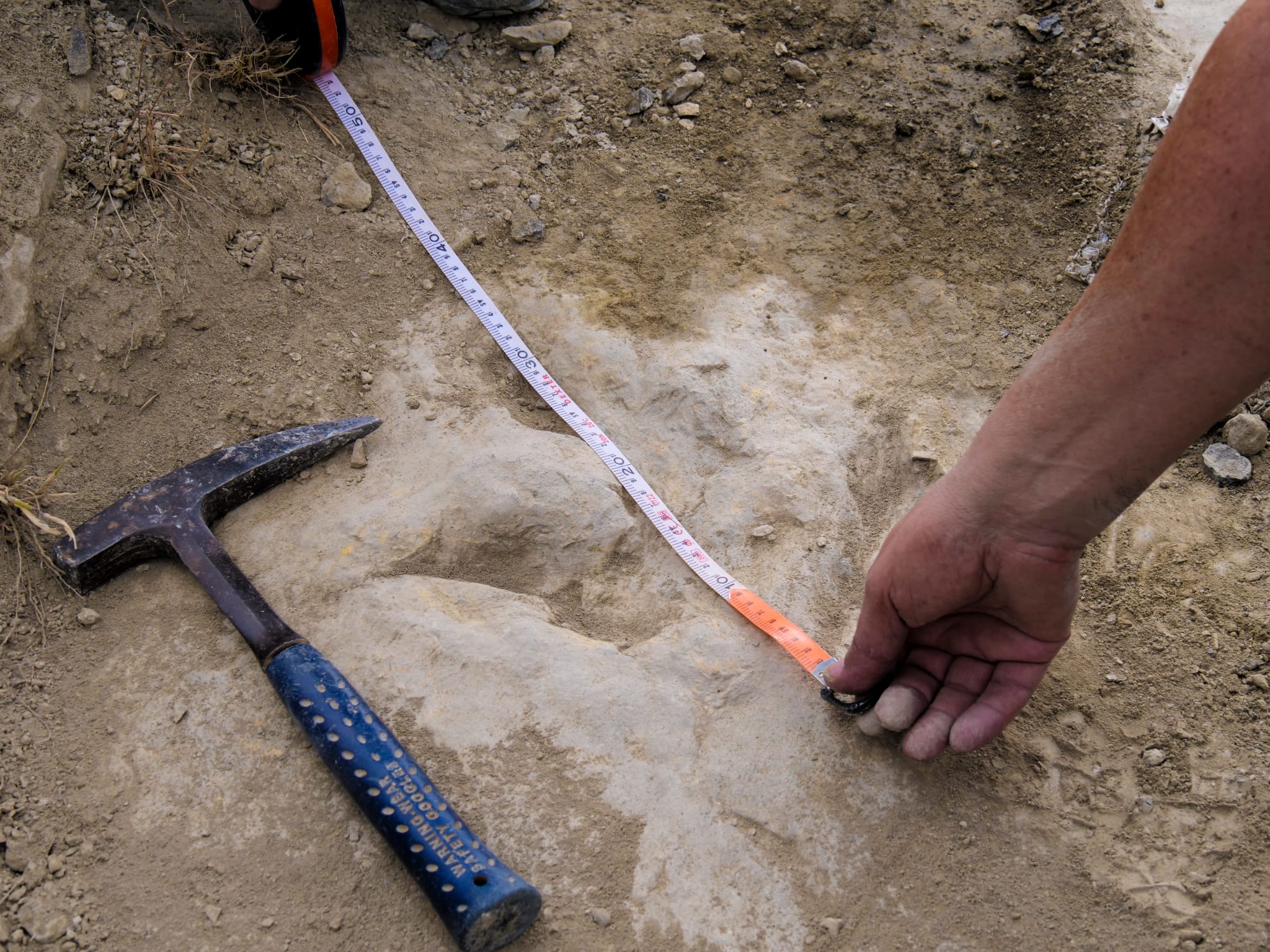 The animals’ speeds when laying the tracks were calculated from the length of the footprints, which allows the researchers to estimate the animals’ hip height, and the distance between footprints (stride length). That led to an estimated speed of up to 44.6 kph for the smaller of the two dinosaurs, and 37.1 kph for the larger one. The placement of the smaller animals’ tracks also suggested “significant, abrupt speed changes,” which indicate agility, Navarro-Lorbés tells the Journal.

Such speed and agility would certainly have made the animals formidable hunters, Navarro-Lorbés tells Reuters. “Their capacity to run very quickly and their maneuvering abilities surely allowed them to chase prey very efficiently. And of course I wouldn’t like to be caught by this guy on a riverbank.”

These abilities may also have helped them avoid becoming meals for their larger kin—“bigger theropods that could see them as their prey”—study coauthor Angelica Torices tells Reuters.

Jens Lallensack, a paleontologist at Liverpool John Moores University in England who was not involved in the study, tells the Journal that the speeds may be overestimated slightly, as there was variation in the size of the footprints. He notes that a more accurate calculation could be made if the species of therapod was known, though Navarro-Lorbés notes determining the species from the tracks is impossible.

The findings follow a similar study published in New Mexico Museum of Natural History and Science Bulletin in January, which estimated running speeds of up to 49 kph from therapod tracks in Utah and Texas. Biomechanical models suggest some species may have reached nearly 65 kph—though tracks to validate such estimates are unlikely to be found, Navarro-Lorbés tells the Journal, as the muddy conditions best for preserving tracks aren’t conducive to top-speed running.

“Behavior is something very difficult to study in dinosaurs,” Pablo Navarro-Lorbés tells The Washington Post. “These kind of findings are very important, I think, for improving that kind of knowledge.”