Although CAR T cells have made their claim to fame in treating leukemia and lymphoma, scientists have now shown they can be directed toward other conditions. Systemic lupus erythematosus is an autoimmune disease in which autoantibodies produced by B cells—those same cells targeted by approved CAR T therapies—lead other immune cells to attack various tissues. Researchers and clinicians have tried to treat lupus by depleting B cells, but without success.

In a study published today (March 6) in Science Translational Medicine, researchers report killing off B cells in two mouse models of lupus using T cells modified with a chimeric antigen receptor (CAR) against CD19, the very B-cell surface protein the cancer therapies go after. The treatment eradicated autoantibodies and extended the animals’ lives.

“It’s a groundbreaking paper for new avenues of treating lupus,” says Anna-Marie Fairhurst, an immunologist at the Singapore Immunology...

The success of CAR T-cell treatments for cancer, which are particularly successful for B-cell leukemia and lymphoma, led coauthor Marko Radic, a molecular immunologist at the University of Tennessee Health Science Center, and colleagues to test whether CAR T cells could be used to treat lupus. “All of our studies really argued that B cells play a central role in the pathogenesis of lupus, so we had envisioned this approach as a test to see whether a relatively rigorous way of eliminating or depleting B cells would also lead to an improvement in the presentation of the disease,” he says.

The authors purified T cells from two different mouse models of lupus that were already showing signs of disease. Then they introduced a gene into the cells so they’d express a receptor against CD19. The team grew large numbers of the cells in vitro and injected them back into the rodents. Mice in which they confirmed that the CAR T cells depleted CD19-positive B cells and autoantibodies lived longer and had healthier spleens, kidneys, and skin than controls. The researchers also found that the introduced CAR T cells persisted for at least a year, while continuing to reduce the number of B cells. 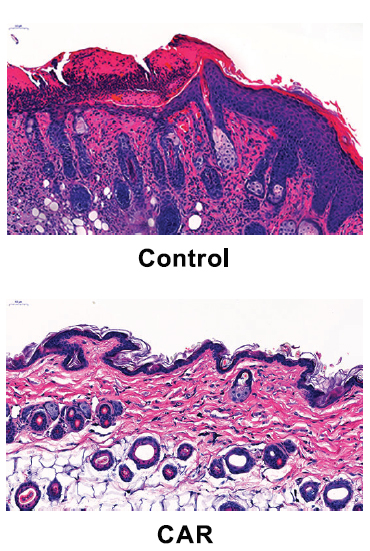 When considering this study, one initial question is why would somebody want to deplete B cells in lupus, given that it’s already known that it doesn’t work with monoclonal antibodies, says Laurence Morel, an immunologist at the University of Florida who was not involved in the work. For instance, a drug called rituximab that kills B cells by targeting the CD20 receptor on their surface was tested on lupus patients in clinical trials, but was not effective.

It’s not clear why the drug didn’t work, she adds. “It’s possible that it’s because of incomplete deletion of the B cells. If that is the case, then the CAR T cell would be a better approach because it would achieve better and longer-lasting elimination because the T cells persist while the antibodies have a vanishing effect.” Another possibility for the discrepancy in therapies is the B-cell protein they grip on to. “[T]hey are targeting CD19, which is a major co-receptor on B cells, rather than targeting CD20, which has a far less defined function in B cells. That might be very important.”

And, of course, the studies are very different—rituximab having been trialled in humans, while the CAR Ts for lupus remain in the preclinical phase. “Lupus mice have been cured many times, so that’s always a caveat,” cautions Morel. “It should make us think about new tools that can be used, but this is still an exploratory type of study. This is not going to cure anybody soon.”