ABOVE: For this study, the researchers analyzed teeth from dozens of skeletal remains, including this jaw, which belonged to a young man who lived roughly 200 years ago. Several teeth have extensive calculus covering the tooth crown.
IRINA M. VELSKO

By scraping the teeth of our ancestors and looking at the microbes on them, scientists have sought to reconstruct the lives of ancient hominins, in particular, what type of diseases they faced. But a recent study challenges one of the assumptions in the field: that we can use our knowledge about modern humans’ dental plaque—the sticky biofilm attached to tooth surfaces—to understand its mineralized version, known as dental calculus, frequently found in human fossils.

The results, published July 6 in Microbiome, show that the microbial profiles of plaque and calculus are different, mainly due to the maturation stage of the biofilm found in each substrate, and using remains’...

“Their findings are cautionary tales for people doing studies and making conclusions,” says Floyd Dewhirst, a microbiologist at the Forsyth Institute in Cambridge, Massachusetts, who was not involved in the research.

The dental plaque in a modern human can offer scientists details about someone’s life, such as diet or disease. For instance, the presence of a group of bacteria, commonly referred to as the red-complex species, is often found in the plaque of patients with periodontitis, a disease where the gum tissue is damaged. It therefore stood to reason that finding these microbial species in ancient calculus could indicate pathogenesis, for example, in Neanderthals, in humans from the early Neolithic period, and in medieval skeletons.

But scientists’ knowledge of dental calculus, the hardened form that occurs once plaque has calcified, is limited. Research on clinical oral microbes mostly focuses on plaque, the authors write in their study. Dental calculus is often found on ancient teeth, but it is less prevalent in modern people, partially due to oral hygiene. The problem, this paper suggests, is that scientists have treated the substrates interchangeably.

To see how well living plaque stands in as a proxy for ancient calculus, the authors compared metagenomic, protein, and metabolomic data from 20 plaque samples—downloaded from the Human Microbiome Project—10 modern calculus samples, and calculus samples collected from 43 200-year-old skeletons.

Their results show that red-complex species are found in higher proportions in dental calculus than in plaque, regardless of whether the samples come from a healthy or a diseased tooth site, both in modern and old teeth. This suggests that the presence of such microbes is not indicating disease, but something else.

Dental biofilms typically start with a set of bacteria, often referred to as early colonizers, that attach to the tooth enamel. As the biofilm grows, the late colonizers come in. It turns out that the red-complex species belong to this latter group.

See “Mining the Mouth’s Many Microbes”

“It seems that in ancient people, who never brushed their teeth, their biofilm across the [tooth] surface would grow to this mature state,” says Irina Velsko, the first author of the paper and an oral microbiologist at the Max Planck Institute for the Science of Human History in Jena, Germany. Therefore, finding red-complex species in calculus might be reflecting the stage of the biofilm, rather than periodontal disease.

Looking at the microbial profile of a calculus sample is consequently not enough to determine whether there was disease or not. Velsko says a better approach would be to ask an osteoarcheologist or pathologist to look at skeletal remains. “There are certain ways that you can characterize the bone to determine if it was broken down during life by disease or degraded after death.” 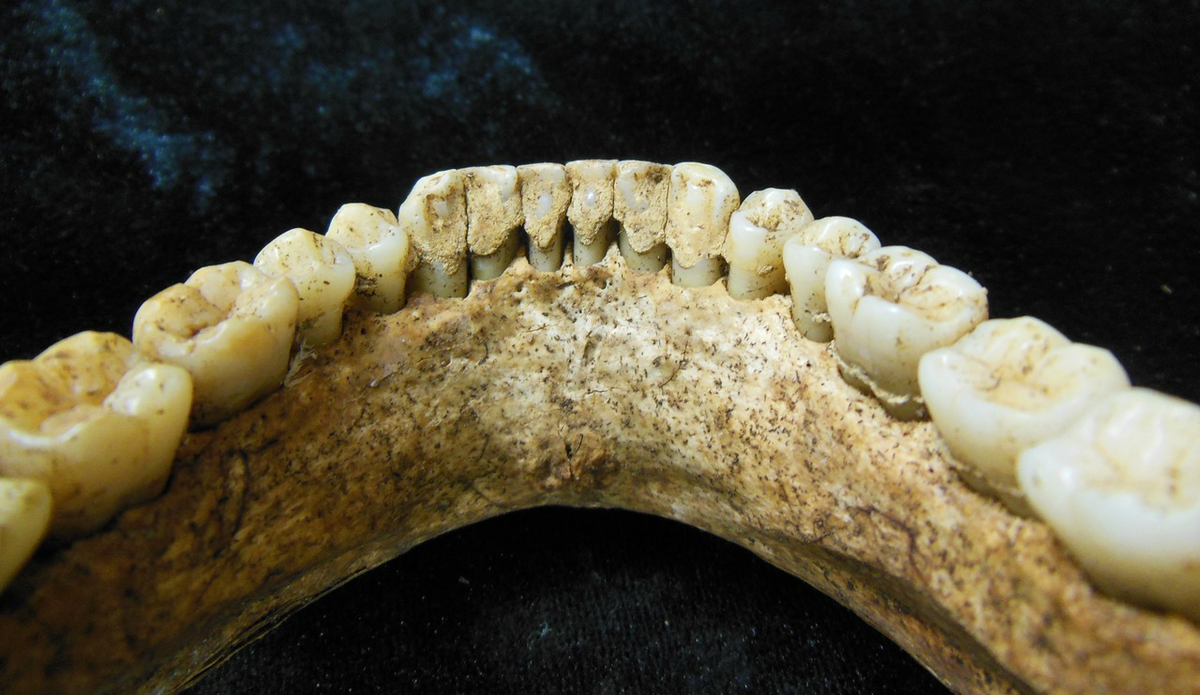 This view of the jaw pictured above shows calculus deposits on the teeth.
irina m. velsko

Raphael Eisenhofer, a microbial ecology postdoc at the University of Adelaide who did not participate in the study, agrees with the authors’ warning message. “It’s probably not as easy as just saying: we found a species and that’s it, there’s periodontal disease.”

The authors encourage the inclusion of protein or metabolite analyses in addition to DNA to get a better picture of the activity of oral bacteria and the immune responses of the host, although in this study the proteomic analysis was only performed in healthy samples. “Certainly going into multi-omics gives an investigator more information,” Dewhirst concurs.

The study of ancient dental calculus “is a very new field,” says Eisenhofer, and studies such as Velsko’s are valuable in shaping best practices. He recalls another example in 2015, when a study showed that there were major biases when reconstructing ancient microbiomes using 16S rRNA gene amplification, “which is why the field moved away from the 16S to shotgun metagenomic sequencing,” he says. “So we need more of these good papers, like this one from Velsko et al., that do the fundamental bits of the methodology [and ask] these important questions that help us interpret things.”