Many countries, as well as some states in the US, have recently been taking steps to legalize the use of cannabis, but the long-term effects of using cannabinoids are still unknown. Cannibidiol (CBD), one of the compounds in the cannabis plant, is increasingly being self-administered to treat health conditions such as anxiety, chronic pain, and epilepsy without the overt effects of tetrahydrocannabinol (THC), the cannabis compound that causes a psychoactive high. The CBD industry is projected to reach $16 billion in the United States alone by 2025, and the compound is being administered to children to treat drug-resistant epilepsy in a clinical trial, according to The New York Times. The 2018 Farm Bill declassified CBD products containing less than 0.3 percent THC.

Anáhuac Mayab University neurobiologist Eric Murillo-Rodríguez researches the neurobiological effects of cannabinoids on sleep to understand their long-term effects on users, especially children with epilepsy who take cannabis-based medicine to control their seizures. Members of his lab presented two projects at the Society for Neuroscience conference in Chicago this week. In one study, they injected adolescent rats with CBD over two weeks. They found that in adulthood, the rats had increased slow wave sleep and decreased rapid eye movement sleep.

In the other study, the researchers injected adolescent rats with the synthetic cannabinoid WIN 55, 212-2 for two weeks, followed by a period of sleep deprivation, after which the rats were allowed to sleep freely. That study showed that the drug seemed to cause decreases in slow wave sleep and rapid eye movement sleep as the rats tried to recover from sleep deprivation. “Once the animals reach adulthood, they display sleep abnormalities,” Murillo-Rodríguez tells The Scientist. “Right now, we are at the point where we’re trying to understand the neurological relevance of it.”

The Scientist spoke with Murillo-Rodríguez about the experiments. 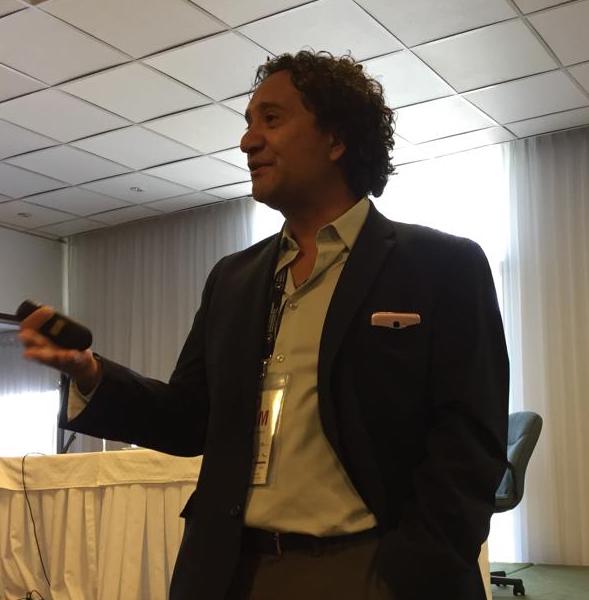 TS: What motivated you to conduct this research?

Eric Murillo-Rodríguez: One of the main backgrounds of this research that I have been reading about is the legalization of using cannabinoids in several parts the world. In Mexico, my home country, we are also discussing that. It’s possible that by the end of this year, [Mexico] will have laws to allow the use of some cannabinoids for medical use. However, there is no solid evidence about what the risks of long-term use could be. . . .

My main concern is that we’re thinking that cannabidiol works very well for managing pediatric epilepsy. That doesn’t mean necessarily that when kids grow up, they won’t have other kinds of problems like memory impairments or impaired motor behaviors [from cannabidiol use]. So we cannot discard that by prescribing cannabidiol in pediatric conditions you are not going to find other health issues in adulthood, or even in the elderly.

TS: What kinds of things should we keep in mind if we’re looking at studies on cannabinoids in animals like rats to try to draw any conclusions about implications for human health?

EM-R: The data we are generating comes from naive laboratory rats that do not display any kind of experimental model like epilepsy, autism, schizophrenia, or anything like that. That’s very important to mention because if we are finding some effects in this preliminary data, we cannot rule out that in experimental models we might find additional disturbances.

So I think that the next step to test these hypotheses is to inject a cannabidiol in an experimental model of epilepsy in rats and to track all the effects until the animals die of old age. These kinds of experiments are quite long and probably quite expensive, but it doesn’t matter because at the end we get a better picture of the whole phenomena. And then while doing those kind of experiments, we would be in a better position to make claims of the risks of using cannabinoids long-term.

TS: One of your studies was on CBD and the other studied a synthetic cannabinoid. Is there a reason why neither looked at the use of THC?

EM-R: Yes. The Cannabis sativa plant contains more than 100 types of cannabinoids. The main compound in cannabis is delta-9-THC and the second most common compound in the plant is cannabidiol. THC has been studied over several decades, and according to the literature, this is the compound that induces many behavioral, cellular, neurochemical, and molecular disturbances. The mechanism of action of THC is that it binds to a specific receptor, the CB1 cannabinoid receptor.

On the other hand, the mechanism of action of cannabidiol is not clear at all. Some groups have claimed that cannabidiol also binds to the CB1 receptor. Other groups have demonstrated that cannabinoid is able to modify other neurotransmitter systems, such as serotonin, for example. But there is no consensus.

So at this point it’s very important, at least from my personal point of view, to get a better idea about how the mechanism of action of cannabidiol compares to that of THC, which has been most studied so far.

TS: What are the lab’s next steps?

EM-R: Number one, is it possible that these effects could be reversed? Is it possible that those sleep disturbances that we have found, can we block them, can we repair them? Question number two is, how does cannabidiol induce these disturbances in adulthood? Evidence from other labs has demonstrated that it’s possible that the CB1 cannabinoid receptors could be involved. And if that’s the case, there is also evidence—limited, but there is evidence—showing that the overstimulation of the CB1 cannabinoid receptor during a young age induces morphological changes in neurons.

I think it is quite possible that once you are inducing this model fully, you have changes in neurons, probably meaning that the neurochemical and neuroanatomical functioning is disturbed. But once again, we are in the preliminary stage, so we need to do more experiments in order to address these questions.