Research on dangerous pathogens has been suspended at an Army lab at Fort Detrick in Maryland after the Centers for Disease Control and Prevention found biosafety lapses there, the Frederick News-Post reported August 2. A spokesperson for the US Army Medical Research Institute of Infectious Diseases (USAMRIID) tells the newspaper that no disease-causing materials have been found outside authorized areas at the site.

According to its website, USAMRIID has been the US Department of Defense’s lead laboratory for medical biological defense research since 1969. The News-Post reports that the facility has both level 3 and level 4 biosafety labs and has worked on pathogens such as Ebola, Yersinia pestis (plague), and Francisella tularensis (tularemia). Those pathogens are among those considered “select agents and toxins” by the Department of Health and Human Services, which only allows authorized labs to work on them.

The New York Times, quoting a statement from the USAMRIID, reports that the lab received the cease and desist order in part because the Centers for Disease Control and Prevention (CDC) found it did not have “sufficient systems in place to decontaminate wastewater” from its highest-security labs. The USAMRIID spokesperson tells the Times that the facility’s steam sterilization plant was damaged in a flood in May 2018, and that it has since been using a chemical decontamination method.

The spokesperson, Caree Vander Linden, also says that many projects are now on hold because of the CDC’s order, but that staff are still on the job. She tells the News-Post that she cannot say when research on the select agents would restart. 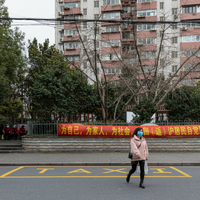