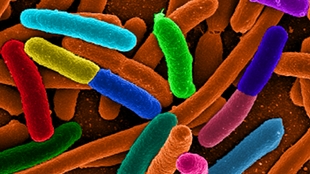 WIKIMEDIA, Mattosaurs/NIAIDCreating gene circuits that respond to a range of inputs has allowed researchers to create cell-based calculators that can perform complicated mathematical functions, in new research published last week (May 15) in Nature. Scientists expect that cell-based circuitry, which responds to environmental changes along a wide range, will open up new applications for these cellular computers.

“It’s a conceptual advance in the field,” said James Collins, a synthetic biologist at Boston University who was not involved in the research. The researchers have “now shown they can develop a broad class of circuits to exploit analog dynamics inside living cells.”

Most efforts to design synthetic gene-based circuits inside living cells have focused on digital strategies, such as using the presence or absence of a chemical to induce a binary cell fate decision, like whether or not to differentiate, for example. But creating a circuit that transforms...

Forcing cells with analog propensities to “act digitally” can actually result in overly complex circuits, explained Khalil. Analog circuits could also have different applications from digital circuits, said senior author Timothy Lu, a synthetic biologist at the Massachusetts Institute of Technology (MIT). For example, a circuit could be designed to maximize the expression of a protein, say insulin, in bacteria, while avoiding toxic levels. A digital design could only turn insulin production off or on. Instead, an analog circuit could find the balance point along the range of possible insulin expression levels that maximized insulin production “while keeping cells happy,” explained Lu.

So Lu and MIT colleagues Ramiz Daniel, Jacob Rubens, and Rahul Sarpeshkar set about designing circuits in Escherichia coli that could perform functions based on a range of inputs, much like the temperature gauge on a thermostat. Specifically, the circuits were sensitive to levels of sugar arabinose or acyl homoserine lactone (AHL). Addition of either of these two molecules turned on expression of a transcription factor that drove expression of a fluorescent protein, mCherry, on a second plasmid. The transcription factor also increased its own expression, creating a positive feedback loop.

By increasing the number of mCherry plasmids in relation to the transcription factor-containing plasmids in the bacteria, the researchers found that the cells could perform logarithms, transforming arabinose concentration (varied by up to 4 orders of magnitude) into a linear change in fluorescence intensity.

Combining both arabinose- and AHL-sensitive circuits and occasionally adding a transcriptional repressor allowed the researchers to use the logarithm-performing cells to design circuits that could add, divide, and calculate power laws, reflected in the fluorescent intensity. For example, the “dividing” circuit calculated the ratio of two chemical inputs—arabinose and AHL—and produced a fluorescent output proportional to the concentration of arabinose divided by the concentration of AHL.

Able to respond to a wide range of input concentrations, analog circuits offer enhanced bio-sensing capabilities over digital strategies’ on/off approach, said Collins. Creating similar circuits in eukaryotic cells should be the next step, to widen the possible applications of such circuits, he added.

Lu and his colleagues are also working to simplify their strategy even more. Right now, the circuits are encoded on two plasmids, but the researchers hope to condense them into one.

“This contribution is a technical tour de force,” said Khalil. “Many people in synthetic biology are still just tinkering with cells to build logic circuits. . . . [This research] has gone way beyond tinkering.”