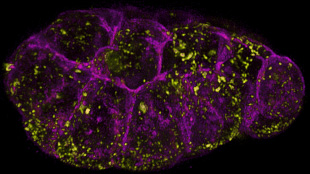 C. elegans embryonic cells with plasma membranes in purple and myosin motors in yellow. The embryo has 26 cells at this stage, and two of the cells are about to become internalized, moving from the surface to the interior. CHRIS HIGGINS, UNC CHAPEL HILL AND LIANG GAO, JANELIA FARM

Cytoskeletal contractions during embryonic development occur long before there are any visible changes in cell shape, suggesting something other than actin and myosin contractions trigger the morphogenetic changes that result in the formation of multilayered embryos from single layers of cells, according to new research.

In a paper published today (February 9) in Science, a research team led by developmental biologist Bob Goldstein at the University of North Carolina at Chapel Hill, presented evidence that the cellular changes that initiate the formation of germ layers are triggered by a novel molecular “clutch,” which anchors the continually contracting network of actomyosin...

“In the past couple of years, with the imaging and microscopy that’s being done, people are really starting to appreciate that this process can be really dynamic,” said Adam Martin, a developmental biologist at the Massachusetts Institute of Technology who was not involved in the research. “What this study really shows is that you can regulate contractility at the tissue level by regulating the attachment between this contractile machine and the attachment between neighboring cells.”

In the model worm, Caenorhabditis elegans, the process of gastrulation—when the three germ layers that will give rise to all the tissues and organs become properly positioned—begins around 90 minutes after the first cell division, when two cells out of a single layer of 26 begin to shrink on one side and squeeze past their neighboring cells toward the center of the embryo.

Goldstein’s former graduate student, Minna Roh-Johnson, initially wanted to visualize the cytoskeletons of C. elegans during this process. However, Goldstein was skeptical that Roh-Johnson would learn anything from such an endeavor. “I just assumed that we’d look at the actin and myosin and at these cell surfaces shrinking and we’d see everything moving at once and we’d be none the wiser,” Goldstein recalled. Cells internalizing from the surface of a C. elegans embryo. The outer surface of two internalizing cells are shown in blue; the myosin motors in green; and the plasma membranes in red.
GOLDSTEIN LAB, UNC CHAPEL HILL

But Roh-Johnson proceeded, using spinning disk confocal microscopy to visualize cells with a fluorescently labeled cell membrane and myosin particles. As expected, she observed the actomyosin networks of the two cells flex and shrink as their outer surfaces began constricting. However, when she watched the cells before any change in cell shape began, she was surprised to see similar contractions in their cytoskeletons. “I kept looking earlier and earlier thinking the contractions would stop at some point, but they didn’t,” she said. “Right when these cells are born they already had these movements occurring, which was very unexpected.”

Not only was the cell’s actin myosin meshwork pulsating, shrinking, and remodeling itself for more than  20 minutes before any changes in cell shapes were visible, it was also doing so at speeds similar to those that occur when the cell does begin to change shape.

By cutting into the actin myosin meshwork using a UV laser beam and then measuring the speed at which the network recoiled, the researchers also determined that the tensile strength of the network was just as strong at earlier time points before gastrulation.

Labeling the outer surface of the cell membranes with quantum dots revealed that they were as dynamic as the cytoskeletons, moving along with every contraction. Instead, what changed over time was that the cytoskeletal movements of the two worm cells became increasingly linked with the movements of the contact zones shared with neighboring cells.

It is this gradual coupling of the actomyosin network with specific cell adhesion points that seems to trigger the shrinking of the cells’ outer surfaces, allowing the cells to squeeze into the center of the embryo.

“As these networks are coming in they’re not attached to the cell-cell borders,” Goldstein explained. “Instead, we speculate that there’s something in between that functions sort of as a clutch.”

Because this mechanism is conserved in Drosophila melanogaster, Goldstein believes it might extend to other higher organisms and may underlie the formation and closure of the human neural tube—failure of which is a common birth defect.