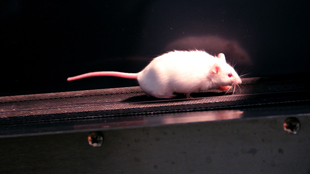 Mouse on a treadmill

It’s indisputable—exercise is good for you. But on a molecular level, scientists don’t really know why. Published online today in Nature, researchers show for the first time that a cellular housekeeping mechanism, called autophagy, could be the source of the beneficial effects of exercise, including protection against diabetes. Targeting the pathway could mimic the health effects of exercise—all the perks with none of the sweat—and help treat type II diabetes, the authors suggest.

“It’s really a new idea,” said Marc Francaux, who studies the biochemistry of exercise at the Université catholique de Louvain and was not involved in the research. “They use three different transgenic mouse models. It’s really convincing.”

“It provides a fresh look into how exercise produces its benefits,” said Gökhan Hotamisligil, who studies metabolic regulatory pathways at the Harvard School of Public Health and also did not participate in the study....

Autophagy is an internal recycling system that degrades damaged or unwanted organelles and proteins in a cell and produces energy. In animal models, this process has been shown to protect against cancer, neurodegenerative disorders, infections, diabetes, and more. “Exercise is known to protect against all these same diseases,” said Beth Levine, a biologist at the University of Texas Southwestern Medical Center, “so it made sense to us that exercise might induce autophagy.”

Levine’s team first analyzed transgenic mice that form green fluorescent protein dots in their cells during autophagy. They found that after running on a treadmill for at least 30 minutes, the mice’s cells exhibited higher levels of autophagy, demonstrating that exercise stimulates the digestive process in vivo.

Next, the researchers created mice with a mutation in Bcl2, an important autophagy regulator. These mutant mice were still capable of performing basic, low-level autophagy but were unable to ramp up autophagy during exercise. When exercised on a treadmill, the mice could not run as long and did not metabolize glucose as well as control mice. The team confirmed their findings in two other mouse models with mutations at different steps of the autophagy pathway.

Finally, Levine and her team assessed the protective effects of exercise in mice fed a high fat diet to induce diabetes. Normally during exercise, blood glucose levels decrease and the animal becomes more sensitive to insulin, so that low or normal levels of insulin are sufficient to maintain healthy blood glucose levels and prevent diabetes. “We postulated that autophagy is necessary for these protective effects of exercise,” said Levine. When placed on the high fat diet, both the normal and mutant mice gained weight and showed impaired insulin sensitivity, a hallmark of type II diabetes. Running on a treadmill improved these symptoms in animals capable of exercise-induced autophagy. The mutant mice, on the other hand, lost some weight but did not enjoy the diabetes-reversing effects of exercise.

The findings raise the possibility that upregulating autophagy could be a potential new method to mimic the effects of exercise and possibly treat diabetes, said Levine. Her team next plans to investigate the role of autophagy in other diseases in which exercise has beneficial effects, such as cancer and Alzheimer’s.

Another surprising result from the study was the evidence that autophagy is activated during exercise in the liver and pancreas—tissues other than skeletal and cardiac muscle. “The entire field has been focused on benefits of exercise coming from things that happen in muscle,” said Hotamisligil. “This suggests that certain pathways engaged by exercise extend beyond muscle tissue and influence other metabolically critical sites.”