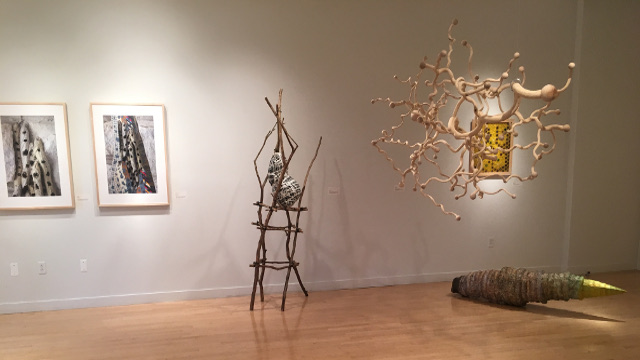 “Animal Architects: Influences on Human Creativity” features works inspired by nests, cocoons, and insect colonies.MOLLY SHARLACHA silkworm larva swathes itself into a cocoon by secreting a single strand of silk, two miles long. Bald-faced hornets scrape and chew cellulose from sticks to build an elaborate paper colony, while a solitary female organ-pipe wasp braids balls of mud into a tubular nest to nourish her young.

A new exhibit draws parallels between these activities and the work of artists who fashion wood, clay, or fibers into expressive forms. “Animal Architects: Influences on Human Creativity,” which opened at the Arts Council of Princeton, New Jersey, this month (November 7), features works by five local artists.

The show’s curator, artist Donna Payton, views her work as a vehicle to “comment on” found objects, whether manmade or natural; she is an avid observer of the plants and animals outside her studio,... 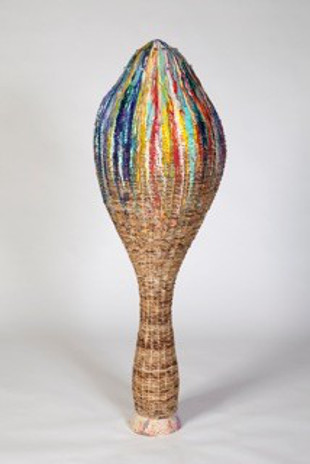 Donna Payton, “Termite Hill”ARTS COUNCIL OF PRINCETONPayton was fascinated by the diverse forms and processes detailed in the Goulds’ book Animal Architects: Building and the Evolution of Intelligence, which became a springboard for her art. She constructed “Cocoon” from straw wreaths, which she sewed together with dental floss and covered with paper. She turned a discarded piece of wicker into “Termite Hill,” embellished with rhinestones and colorful drips of paint, paying homage to the insects’ clay nests.

Payton then invited four other artists to produce new works in response to the book, and the exhibit “Animal Architects” was born. With the exhibit, Payton seeks to bring animal homes to the attention of art lovers, as well as to encourage scientists to “start thinking about art a little,” she said, “to give a different dimension to their process and the way they think.”

One chapter of the Goulds’ book is devoted to the structures built by male bowerbirds, which are among the most extreme examples of sexual selection. Although made of twigs and other found objects, bowers are not nests; they are more accurately described as “sex sculptures,” according to James Gould. With great variation among species, male bowerbirds build fancy huts, “maypoles,” and “avenues” to entice female mates.

Naturally, sculptor Harry Bower was intrigued by the birds’ craftsmanship. Aside from the connection to his own name, said Bower, “I’m a fiber artist, so I could relate to any of the animals or insects that did any kind of spinning, wrapping, or weaving.” In the garden outside the arts center, he erected two bowerbird-inspired sculptures. One has become a community art project, as art instructors invite their students to create embellishments for the human-sized bowerbird “avenue,” which is built of bamboo held together with plastic zip ties.

Kathleen Preziosi, a ceramicist, had made some crustacean-like works in the past. After reading Animal Architects, she created “Hymenoptera,” a stoneware interpretation of a paper wasps’ nest. “And then I kind of got hooked on coral,” she said. Preziosi’s “Calcified, Colony Installation” is a series of coral clumps. Each wheel-thrown piece is topped with coiled and pinched corallites, the cups that house individual coral polyps. Loosely clustered at eye level in a corner of the gallery, the work evokes the view of a fish gliding along the ocean floor. 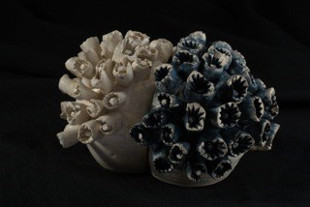 Kathleen Preziosi, “Calcified, Colony Installation”ARTS COUNCIL OF PRINCETONLike many compelling works of art, the pieces in “Animal Architects” challenge the viewer to experience the world from a new perspective. At a book talk held in conjunction with the exhibit, James Gould invited the audience to imagine weaving twigs using a bird’s beak. “Some of this looks pretty easy, but try it with just one hand,” he said—a task he has assigned to students in his animal behavior courses. “You spend the whole class [on it], and you just have this pathetic pile of sticks.”

Payton finds animals’ creations to be such a fruitful source of inspiration that she has expanded her project: a larger exhibit, to include new works and additional artists, is planned for April 2016 in the galleries of Princeton’s D&R Greenway Land Trust.

“Animal Architects” is on view at the Arts Council of Princeton through December 5, 2015.