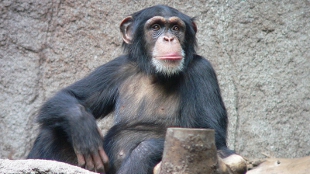 Human adenoviruses have been proposed as vectors for antigens in vaccines because of their ability to induce strong immune responses in animal models. But there is one major problem—patients that have already been exposed to such adenoviruses naturally develop antibodies against them, which then neutralize the vaccine before it has a chance to deliver its package.

“The body has mounted an immune response, which stays for the rest of its life,” explained Alfredo Nicosia of Okairos in Rome, Italy.

Now, Nicosia and his colleagues believe they have found a solution—use chimpanzee adenoviruses instead. According to their report, out today (January 4) in Science Translational Medicine, chimp adenoviruses avoid the problem of preexisting immunity that can dampen vaccine potency. A second accompanying paper reports the successful clinical trial results for one such chimp virus-based vaccine for hepatitis C.

“The preexisting immunity to human adenoviruses has...

Nicosia and his team found their alternative to human adenoviruses from a rather unpleasant source: chimp poop. Because of people’s similarity to chimps, Nicosia reasoned, adenoviruses that can infect chimps can probably infect humans as well. Importantly, however, they generally don’t, so people haven’t built up antibodies to the viruses.

Collecting stool samples from zoos and animal facilities, Nicosia and his team isolated and characterized almost 30 different chimp adenovirus serotypes from some 1,000 stool samples. They made safe forms of the viruses that were unable to replicate, and tested them for their immune potency in mice. The best ones, generating the biggest cellular immune responses, were chosen for making trial vaccines.

“We’re working on different vaccines for Ebola, HIV, malaria, hepatitis C,” said Nicosia. “We wish to dedicate one specific chimpanzee derived serotype to one specific vaccine target” to avoid the possibility that antibodies induced by one vaccine vector might blunt the effect of another, he explained. “We can not be sure that that is going to be a problem, but having the luxury to choose among this large set of different serotypes, we decided to go the safer way.”

Results from a preliminary clinical trial of their hepatitis C virus (HCV) vaccine are presented in an accompanying paper. Worryingly, rates of HCV infection are on the rise. “In this country [USA] and probably globally, there is an increasing rate of HCV infection among adolescents and young adults,” said Walker. And unfortunately, there isn’t currently a vaccine for the virus.

So Paul Klenerman of the University of Oxford and his colleagues chose from the new suite of chimp adenoviruses to develop a new HCV vaccine candidate. The team favored adenovirus-based vaccines because they can induce a cellular immune response—namely, the activation of T cells—that is thought to be important for dealing with HCV. “One thing that is interesting in hepatitis C is that some people naturally clear the infection,” explained Klenerman. “What we’ve been trying to do is just encourage people to generate an immune response that will take them down that pathway more efficiently.”

Indeed, the chimp adenovirus-based HCV vaccine induced a strong T cell response in the injected volunteers. “Much better than we expected,” said Klenerman—“easily as big as people with natural infections that clear them.” The team also tested a vaccine that used a rare human adenovirus serotype, Ad6, again with the plan of avoiding preexisting immunity. This vaccine yielded similar results.

“I’m amazed that it is possible to induce such strong HCV-specific immune responses,” enthused Robert Thimme of the University of Freiburg, Germany. Furthermore, “they had detectable responses through one year,” added Walker, suggesting long-term immune memory. “I thought that that was encouraging,” he said. “In terms of moving forward with the vaccine, this is what you would want to see.”

Size and duration of response isn’t everything, of course, said Klenerman, “The main thing is to see whether it can actually protect you.” To that end, a second trial in high-risk individuals—intravenous drug users—is currently underway.