ABOVE: A cotton sprout grows in a container of soil on the moon.
CHONGQING UNIVERSITY

Update (January 16, 2019): The cotton sprouts growing on the moon have died. They did not survive lunar night, which can reach -173 °Celsius. Mission planners didn't expect the plants to live, Newsweek reports.

There’s cotton growing on the far side of the moon—the first time plants have sprouted there. On January 3, a lunar lander called Chang’e-4 touched down on the moon, deploying a rover to explore lunar terrain. The lander also carries a container filled with soil and cotton and potato seeds, and the cotton seeds are now sprouting, an image released by the China National Space Administration today (January 15) shows. The image was published on the People’s Daily, China twitter feed, which is run by the country’s state-owned media group.

“Learning about these plants’ growth in a low-gravity environment would allow us to lay the foundation for our future establishment of space base,” Chongqing University’s Liu Hanlong, who is leading the experiment, says in a statement, according to the South China Morning Post. The space agency is developing preliminary plans for a crewed lunar landing mission in the 2030s, with the possibility of building a moon base with international cooperation afterward.

Researchers have been working on several projects to grow plants on the international space station as a step toward understanding how they would grow on the moon. This is the first time that scientists have gotten seeds to sprout there. The soil and seeds are secured in an airtight container designed to maintain a temperature of 25 °C. There’s also rapeseed, Arabidopsis, and potato in the soil in the container, along with yeast and fruit fly eggs. The organisms have access to air, water, and other nutrients to help them grow and act as a biosphere, with the yeast decomposing the dead plants and fly waste while serving as food for the flies.

The sprouting is “good news,” Fred Watson, the Australian Astronomical Observatory’s astronomer-at-large, tells the BBC. “It suggests that there might not be insurmountable problems for astronauts in [the] future trying to grow their own crops on the moon in a controlled environment.” 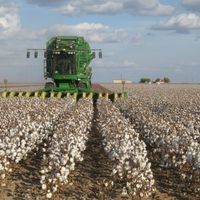