The researchers found thousands of species not previously documented.

Paris has the Eiffel Tower, New York has the Statue of Liberty, and Rome has the Colosseum, but a new study finds that cities also have other signature distinctions, even if they never appear on a postcard: their resident microbes. Over a three-year span, dozens of scientists took nearly 5,000 samples from 60 cities around the globe. As reported in Cell on Wednesday (May 26), these locales appear to have distinct microbial communities that include thousands of species of viruses and bacteria that had never been documented before.

The samples were taken between 2015 and 2017 on a variety of surfaces in transit stations of major cities. From ticket counters to turnstiles to seats on the subway, the scientists would swab surfaces for three minutes to gather genetic material for sequencing. The data, which the researchers uploaded to the open-source database MetaSUB, showed that the relative abundances of microbes varied greatly. Although 31 species could be found in 97 percent of the cities—what the authors call the “core urban microbiome”—each area’s microbiome was a unique mix. 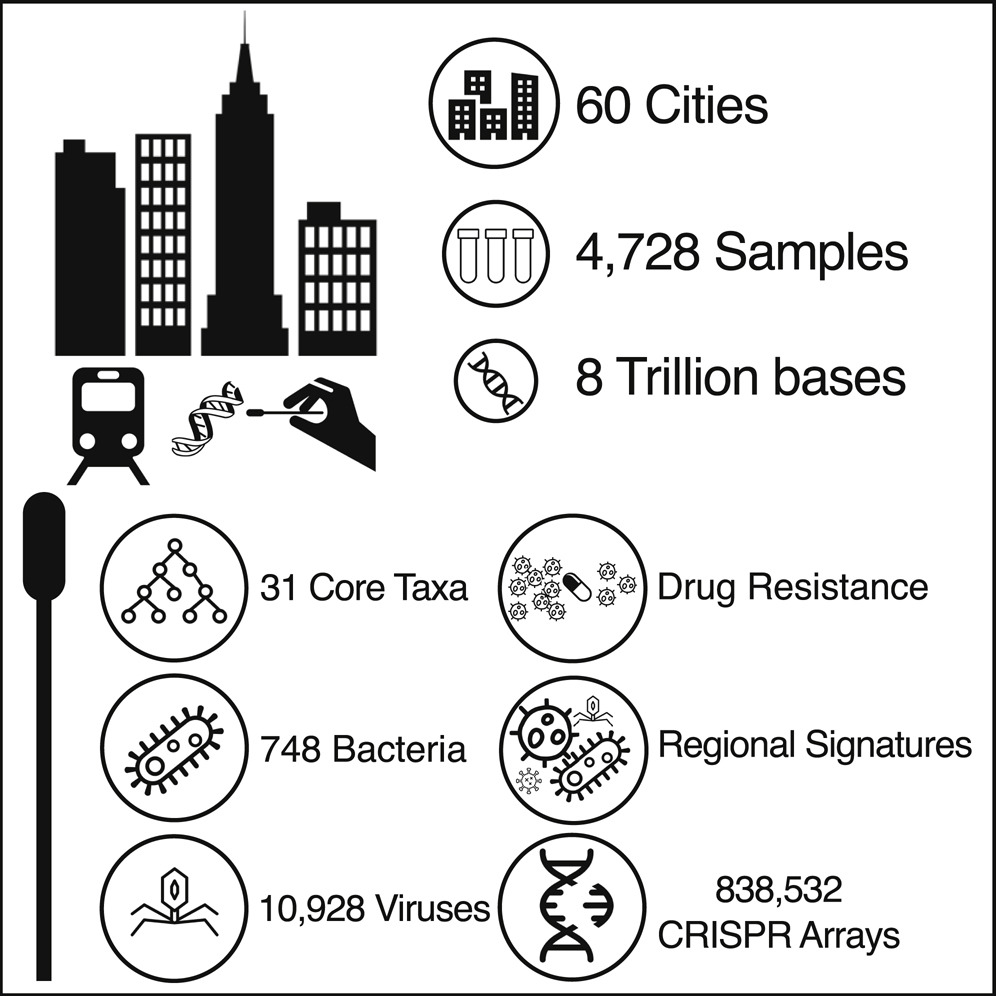 Graphical representation of the study’s abstract, numerating total samples taken and all of the findings
D. DANKO ET AL., CELL, 2021

“Every city has its own ‘molecular echo’ of the microbes that define it,” coauthor Christopher Mason says in a press release. “If you gave me your shoe, I could tell you with about 90% accuracy the city in the world from which you came.” A companion paper in Microbiome, also published on Wednesday, analyzed air samples from transit stations of six cities for microbial genetic signatures and found that these, too, held geographical variations.

What isn’t as clear is why each area’s microbiome is so different. The authors speculate that it could be to do with the area’s climate, plant and wildlife, or the humans that live there.

The team examining microbes on surfaces found more than 4,000 known species and more than 14,000 species (nearly 11,000 of which are viruses) that had DNA sequences not found in any database. But at this point, researchers say that there isn’t a reason to suspect the newly discovered microbes pose a significant risk to human health.

“I think the most important thing is not to freak out,” Noah Fierer, a microbiologist at the University of Colorado Boulder who was not involved in the study, tells The New York Times. “Most of these aren’t pathogens, most of them are probably innocuous, and some may actually be beneficial.”

Still, the authors note that it would be beneficial for cities to keep tabs on any shifts in a city’s microbiome as it might help identify outbreaks before they become widely problematic. “The coronavirus disease 2019 crisis has thrown the need for broad microbial surveillance into sharp relief,” the authors write in the paper. “Microbial genetic mapping of urban environments will give public health officials tools to assess risk, map outbreaks, and genetically characterize problematic species.”